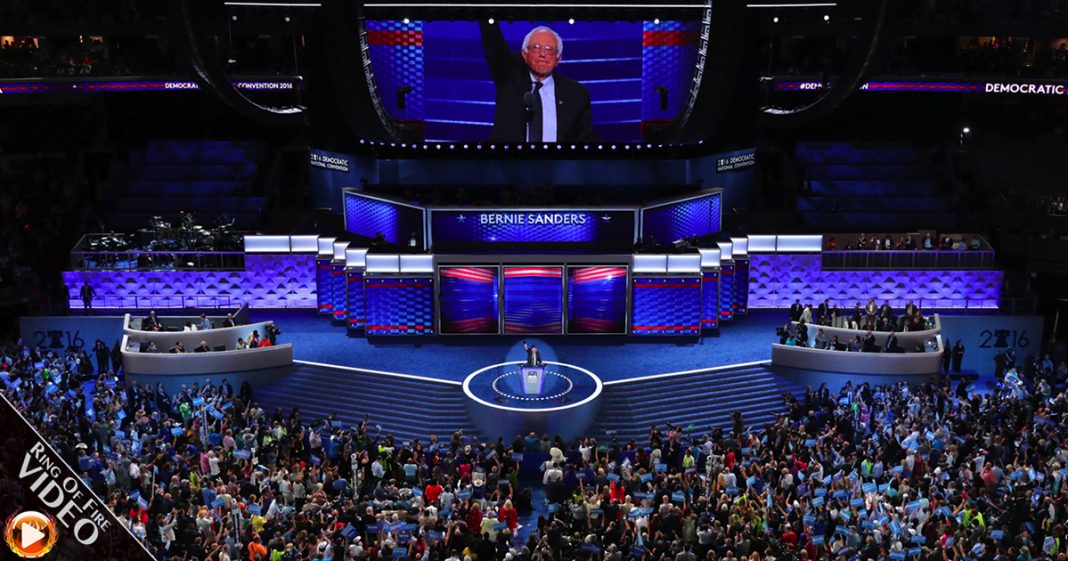 The Monday-morning quarterbacking of the Democratic Party is still going strong, but the Party could have easily pulled off a massive upset in the 2016 election if they simply had learned from their past mistakes. It really isn’t that hard to pinpoint why they lost in 2016. The Ring of Fire’s Farron Cousins discusses this.

Democrats, in general, still trying to figure out exactly where Hillary Clinton went wrong, who she did and did not reach out to. Were the scandals that were largely exaggerated by the media, did those play a huge role in her loss? Here’s what it is. The Democratic party should have known this because it’s happened to them several times in the last few elections, most notably in the 2014 midterm elections. The Democratic party lost across all levels in this election in 2016 because they didn’t learn anything from 2014, and the reason they lost in 2014 is because Democrats did not talk about the issues.

Here’s why that’s important. Not only do you have to explain to voters what you specifically stand for and what you would like to do if elected into office, but the more important thing is when you don’t talk about the issues, you allow the opposition, the Republican party to craft and direct the conversation to the voters, and that’s what the Democrats continuously fail to realize. If you don’t get out there and get in front of the issue, then the Republicans have the ability to frame it. They can make you look like an idiot, look a do nothing politician, if you don’t address it first.

In this 2016 election, there were plenty of opportunities for Hillary Clinton to do exactly that. Donald Trump had no position on any issues because he’s never represented anyone. He’s never had to look out for another human being other than himself. Had Hillary Clinton gone to the American public with a strong message on climate change, on labor, on the economy, on worker’s rights, she could have won this thing. I know a lot of people say, “Well, no, because the …” No, no. Just shut up about any other issue. It’s not because of the white anger. Misogyny and racism did play a role, but Hillary Clinton failed on so many levels to even deliver a simple message.

Where did she stand on the Dakota Access Pipeline? All the people still out there defending Hillary Clinton, tell me where she stood on the Dakota Access Pipeline. You can’t because she didn’t. Hillary Clinton, the reason she didn’t take a stand on anything is because she doesn’t have a stand on anything. She has been running for President for 20 years. She would say whatever she had to say to get elected, and that was her problem. She didn’t know where she stood on any issues because she was waiting to gauge the public’s response to it. Unfortunately, she clearly wasn’t paying attention to the public on a lot of these issues. That’s why it took her so long, so many years to finally reverse and come out against the TPP. It’s why it took her so many years to come out against the Keystone XL Pipeline, which her state department actually helped put in play.

She didn’t stand for anything, and it’s not just Hillary. When you look at the Democratic losses across the board, they didn’t stand for anything. They didn’t control the conversation. They didn’t control the message. They didn’t have a position to talk about. When you’re up against a Republican party that is painfully stupid and ignorant and in the pocket of big business, it’s not difficult to control the message. It’s not difficult to get out front and say, “Climate change is very real and we’re going to tackle it, and we’re going to tackle it without hurting a single American job.” That is possible. There are plenty of outlines on how to do that, but there wasn’t a single Democrat that talked about this with the exception of Bernie Sanders who is actually an Independent, and I’m not getting into the would Bernie have won. I’m just saying he was the only one who talked about it.

The Democrats don’t have a message, but more importantly, they don’t have a backbone right now. They didn’t in 2016. They didn’t in 2014. Until they find that, they find that backbone and they find their voice and they understand that you can’t be wishy washy, you have to take a firm stand and then you have to tell the public why that stand is right, and that’s what the Democratic party was lacking. If that was the way this campaign was going to be run by whoever the nominee was, they would have lost no matter what. When you’re running against a demagogue, you have to attack on the issues, and that’s what the Democrats didn’t do in 2016.