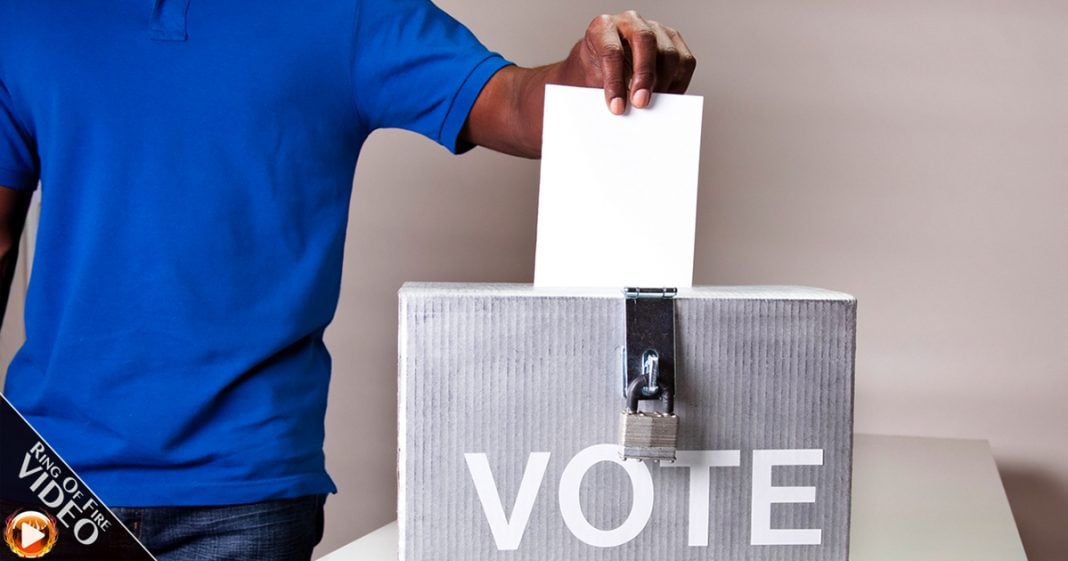 It’s the same story every 4 years: The Democratic Party starts panicking about GOP voter suppression, but as soon as the election ends, they suddenly forget about the fact that minorities are being denied their right to vote. The Ring of Fire’s Farron Cousins discusses this.

Let me give everybody a brief history of the modern Democratic Party. In the 2004 elections when George W. Bush beat John Kerry, he was able to do that because voters in states like Ohio and Florida were disenfranchised by the thousand due to Republican voter suppression tactics. Right after the 2004 election, Democrats got angry and we said, ‘Look, we’re not going to let this happen again. We’re going to fix this problem. Don’t you worry about it.’ About a day later, they forgot, or they just stopped caring. 2008 rolls around and right before the 2008 election, the Democratic Party suddenly gets frantic about the fact that we never fixed the voter suppression from the GOP, so they act like they’re going to do something, but then President Obama won, and so a lot of Democrats thought, ‘Well hey, I guess maybe the problem fixed itself.’

Then before the 2012 elections, same frigging thing. GOP voter suppression, Democratic freak-out, Democratic victory, so we just stop caring. Then a year or two after the 2012 election, Supreme Court guts the Voting Rights Act, Democrats got mad about it for about a day-and-a-half, and then they forgot about it until right before the 2016 election. We saw it. We saw it in states like North Carolina, in Ohio, in Texas, and Alabama even. We knew that they were closing polling places. Some areas in North Carolina, according to Ari Berman at The Nation, who has done a phenomenal job of covering this, closed 158 early voting stations and disenfranchised thousands of African American voters in North Carolina. Early voting stations in Alabama were closed. Same thing with Texas. Same thing with Ohio. Same thing with Florida. The Democratic Party got mad about it again for about a day, and now the election’s over and they’ve already moved on.

We had a very serious problem, potentially an election-swaying problem, with Democratic voters being disenfranchised just because of the color of their skin. It was by design. Now, we talked about it ad nauseam. The Republican Party in the state of North Carolina congratulated itself on the fact that African American turnout was at an all-time low. It dropped by 6%. They were super happy, because they knew that it was by design. The policies they put in place, the plan that they enacted, kept black people from getting to the polls in North Carolina last Tuesday, and the Democratic Party is so weak and pathetic when it comes to protecting people’s rights to vote. It’s sickening, because we see what they’re doing. We get their internal memos, and we publish them, and we say, ‘This is horrible,’ and then we move on.

We can’t do that. It doesn’t matter if it’s a Republican voter or a Democratic voter being disenfranchised. That is the basic right of every American citizen living in this democracy, the right to vote. We’re stripping the right to vote away from former felons. According to the court systems they’ve been rehabilitated, ready to reenter society, but you still just can’t vote depending on what state you’re in. You have to go through this long process, and most of the time you end up getting denied. We are doing everything possible to make it harder for people to vote. The slightest little thing, a typo on the state’s part in your name prevents you from being able to vote in states like Ohio. Why aren’t we doing anything?

As Ari Berman pointed out in a recent piece in The Nation following the election, the attack on voting rights was the most underreported story in the United States this election year. He is 100% right. The only other thing that was actually slightly reported on even less than voting rights was climate change, but I understand where he’s coming from. This was something that directly impacted this election, and the Democratic Party, the corporate media, everybody failed. Now, you do have people, Brad Friedman at The Brad Blog, who has been covering this issue every single day since before the 2004 election. Brad Friedman has been doing this longer than anyone else, and I encourage everybody to go bradblog.com and check this out, and follow it, and stay on it.

We get two years till the midterm elections, and if Donald Trump is as bad as we expect he’s going to be, the Democratic Party could flip the House and flip the Senate, but they’re not going to do that if they don’t stop the GOP voter suppression, and they’re sure as hell not going to win the 2020 election if you don’t reverse it right now. This is something the Democratic Party has to think about every single day, every day until it’s fixed 100%. Until then, this is your top priority, at least one of them, top three. Every day work on restoring voting rights to every single eligible American citizens. That is your homework, Democratic Party. Get on it.