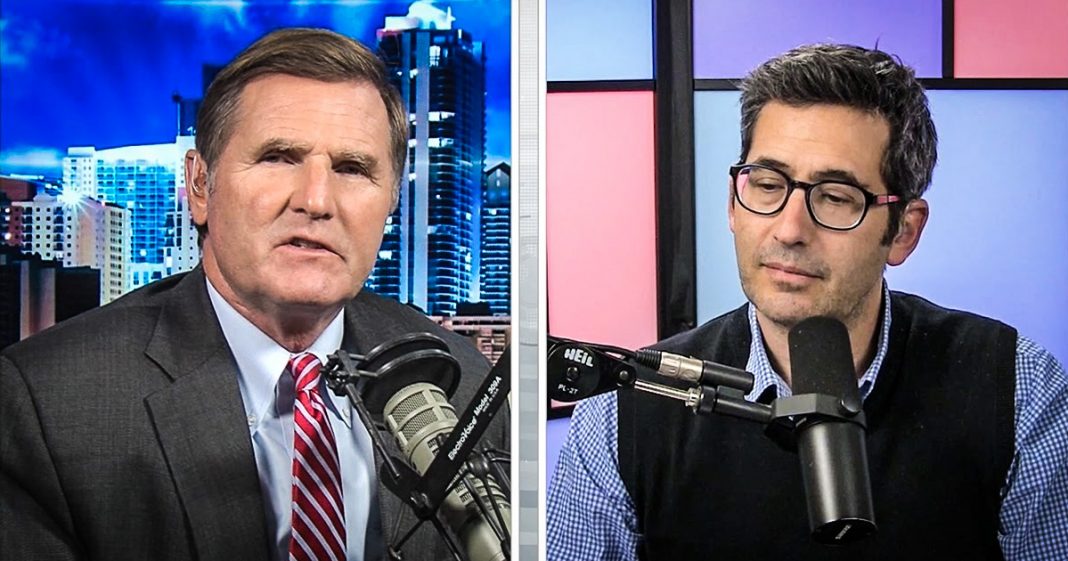 Chuck Schumer has been named as the new Minority Leader, but he’s nothing more than another political hack for Wall Street. Ring of Fire’s Mike Papantonio and Sam Seder discuss where Democratic leadership is heading after the 2016 election.

Sam: Pap, of course we’re dealing here with a transition that is … I don’t know … I don’t even know how to describe it. Certainly people coming out of the White House, they’re scratching their heads. These guys are missing appointments with the Department of Energy, who’s in charge of the nukes but let’s just take a moment to turn and see where we are on the other side of the ledger because the Democrats suffered a blow. In terms of sheer votes, of course Hillary Clinton at this point is now beating him, beating Donald Trump by a million plus votes in the popular vote but the popular vote doesn’t matter. As much as we heard early on that Trump had not beaten Mitt Romney’s numbers to the extent that he’s … and the count is still ongoing, frankly, but the problem is that his voters came from other places. You know, Mitt Romney did better in California but that’s a blue state. Donald Trump did better in Pennsylvania and that’s a problem because that was-

Sam: Yeah so the question is, to the extent that we’re seeing any difference on the Democratic side, some things are mildly encouraging but it’s not like the Democratic Party is going to say, ‘Oh, okay. The Bernie Sanders folks were right, we’re just willing to cede power to everybody.’ No. That’s not what’s going to happen here.

Pap: Sam, Bernie Sanders was the most obvious choice, I guess this is where you’re going with this. Bernie Sanders, he was most obvious choice for leadership position in the Senate and the Democratic party … the Democratic Party knew they should have gone for it and they won’t. The only problem I see is the Democratic Party thinks that they can use Bernie as I guess, this tool when they need some kind of personal gain, bring Bernie out of the closet and you know, put him on stage and let him … ‘Here’s Bernie Sanders, he’s with us now.’ The truth is they’ve learned nothing. They’re picking Chuck Schumer as the Minority Leader. Now what more of a statement is that than we’re a bunch of idiots who still haven’t learned that the Wall Street connection has nothing to do with the average American.

Chuck Schumer, with all these giveaways to Wall Street and this love affair with Wall Street, has nothing in common with the American people. What does it take for them to understand in this Washington D.C. bubble that that is just a horrendous mistake? Schumer hass repeatedly condemned regulations on Wall Street, he’s coming out against tax traders and hedge funds, he doesn’t want to regulate them at all. He wasn’t in favor of raising taxes on wealthy Americans, he wanted to actually raise the threshold tax on those that are making more than a million a year. At a time when the Democratic Party has been just beat, they are just beat down to the ground and there’s no sign that anybody is there to pull the sword out of the stone right now. They’ve been pummeled and they still want to continue the same idiot drumbeat. Wall Street, Wall Street, Wall Street, corporate, corporate, corporate. They’re beyond help. I mean, they’re literally beyond help.

Sam: Well, I mean the … I think to a certain extent that’s right. It was already baked into the cake that Schumer would end up being the Minority Leader. I don’t think it’s any surprise.

Pap: Well it is, it is a surprise to me but go ahead.

Sam: The real issue is that Bernie Sanders was up for the Chair of the Policy and Communications Committee. Debbie Stabenow ended up getting that and Bernie Sanders ended up being the Chair of Outreach. The very least, he’s in the leadership. It’s not … I would like him to go a little higher up on that ladder as it were but in the Senate, frankly, there’s not going to be much. Chuck Schumer may want to cut taxes on corporations but he’s certainly going to be able to pretend like he doesn’t want it because there’s not going to be much that the Democrats are going to be able to do about it, frankly in the Senate or in the House. The big race, it seems to me, is now with Keith Ellison as the head of the DNC.

Pap: Yeah. I agree with that.

Sam: The guy’s not perfect on all issues but he is a hard core populist. He has been chair of the … progressive caucus in the House. He’s a guy that, you know this, Pap, what ever type of sort of grass roots oriented event, you see him there.

Sam: And so you know, the interesting thing to me as I look at this election and I think there was a lot of reasons why Hillary Clinton … or a lot of individual reasons that had gone a different way, Hillary Clinton could have won. We’re not talking about a lot of votes. We’re talking about two or three states. We don’t even have Michigan certified. I think she’s going to end up losing it but in terms of what she and her campaign could control, I think they made decisions that were reliant on big data as opposed to grass roots organizing. They made decisions in terms of targeting suburban Republican voters versus …

Sam: Going toward blue collar voters and these are decisions and the way that they executed these decisions, are in many respects, I think tied into her ideology.