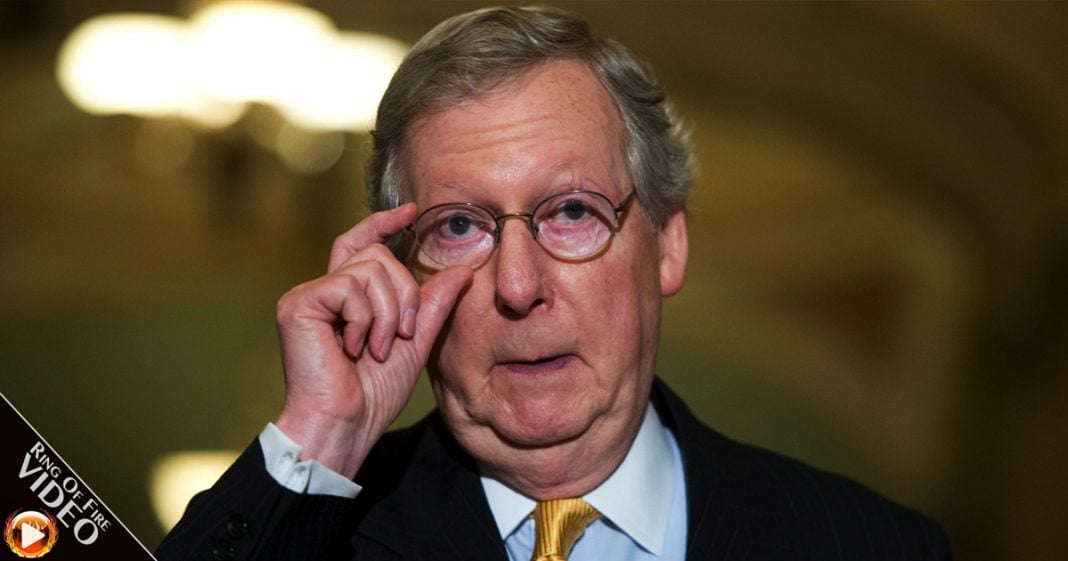 For years, Mitch McConnell has been whining about President Obama’s energy policies hurting the coal industry in McConnell’s home state. But now, the Senate majority leader finally admits that those job losses were actually market-driven. Ring of Fire’s Farron Cousins discusses this.

During his campaign, Donald Trump promised out-of-work coal miners throughout the United States that if he wins, he is going to bring back those coal jobs. Now, Donald Trump blamed the loss of those jobs on President Obama’s energy policies, but Trump is not the first Republican to bring this up. For years Mitch McConnell, Senate Majority Leader, has been telling his constituents in Kentucky, and elsewhere, that the reason those coal miners lost their jobs was 100% due to President Obama’s war on coal. That was the talking point, the war on coal. It’s existed for many years. Mitt Romney used it in his campaign, and they always wanted to tie it back to what President Obama has done as far as trying or saying that he was going to try to rein in carbon emissions starting with the coal industry.

Well, this week Mitch McConnell has finally come out and said, ‘You know what? Eh, even if we lifted all these regulations, those coal jobs, they’re just not going to come back.’ Do you know why Mitch McConnell said this? It’s not because he finally understands that President Obama did really nothing for the environment. It’s because maybe he finally read a newspaper, or read some kind of financial analysis that tells him that the reason coal jobs are being lost at an exponential rate in the United States and coal companies are going bankrupt is because global demand for coal is falling exponentially by the year.

China and India have reduced their coal imports over the last two years by almost 50%. There is just nobody else that wants our coal. Do you know why? Because the rest of the planet understands that we can’t keep relying on fossil fuels and save the planet at the same time. You have to make that harsh transition. Yeah, it’s harsh. It’s like a junkie coming off of heroin. It’s a tough road, but you got to give it up cold turkey and switch to renewable sources. That’s something that China’s doing. They’re almost to the point of surpassing the United States as the leader in renewable energy. India, well on their way. Europe, well on their way.

The United States is going backwards, and it’s because of people like Mitch McConnell, who spread these false talking points about an alleged war on coal that even the coal industry admitted didn’t exist. They admitted that two years ago. They said Obama’s regulations have nothing to do with the fact that our industry is losing jobs, and we’re losing money, and we’re going out of business left and right. Mitch McConnell was one of the only people still out there saying like, ‘No, no, you’re wrong. It’s Obama. This guy did it.’

Republicans love to talk about capitalism, and how great the free market is, and they don’t even realize that it’s the free market, the will of the people around the globe that killed the coal industry, not President Obama. It’s those markets that you talk about are so wonderful. Those are the reasons those jobs left, and it’s a good thing they did, to be honest, because the rest of the world understands we got to get off fossil fuels. It’s time for the United States to finally fall in line.