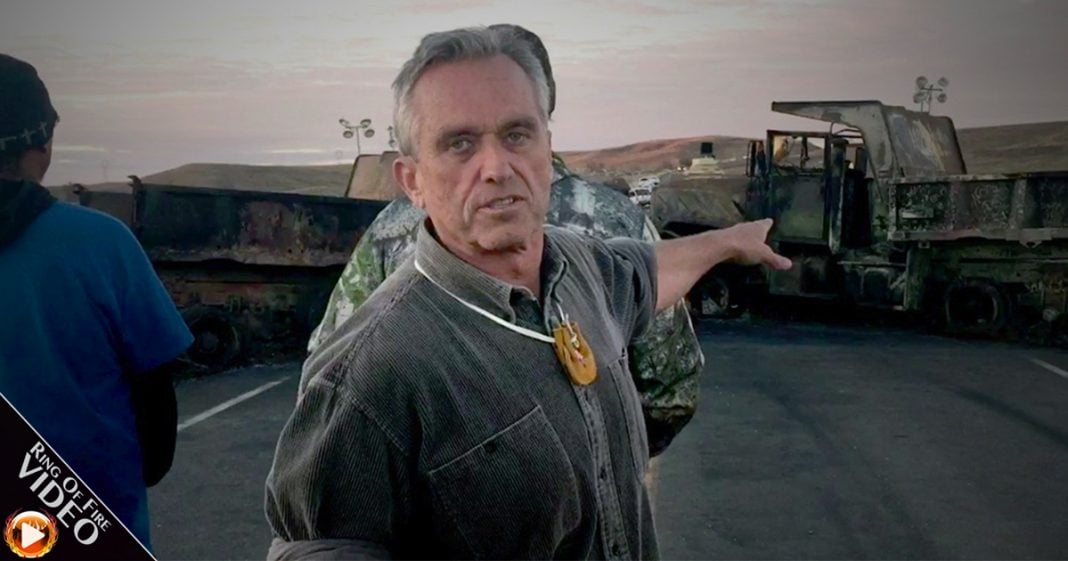 Ring of Fire host and Waterkeeper President Robert F. Kennedy, Jr. has joined the front lines of the Standing Rock protests, helping to fight the construction of the Dakota Access Pipeline. The Ring of Fire’s Farron Cousins discusses this.

Farron:
Ring of Fire radio host and Water Keeper Alliance President, Robert F. Kennedy Jr., is standing with Standing Rock this week. He is out there on the front lines with these protesters, trying to prevent the construction of the Dakota Access Pipeline. He sent the following video, which was posted via EcoWatch. Take a look at what Bobby has to say about what’s happening out there.

RFK Jr:
This is the front line, and what you see here is … You see about 40 or 50 police cars and military vehicles on this side.

Police:
It’s not safe for you to be there.

RFK Jr:
You see them using sound to try to discourage people from coming up here. The pipeline is being constructed here. The pipeline is being constructed illegally, right under those lights. They’re breaking federal laws. The people who are trying to stop them are actually demanding compliance with the law. You have an outlaw company that is violating federal law, and instead of deploying the state action to stop the lawbreaker, the state is deploying this massive military might to stop people who are peacefully protesting and asking for law and order.

Farron:
On behalf of the entire Ring of Fire family, and to be honest, on behalf of every one in this country, thank you Bobby for getting out there, for making your voice heard, and helping these people who are trying to stop the construction of this disaster of a pipeline. Now, in the EcoWatch article, it quotes Bobby even further than what’s in that specific video. Where Bobby mentions the fact that environmental issues, the access to clean drinking water, is an issue that specifically and primarily affects people of color all thought the United States. I think that is a point … I wish it was on that video. I think that is a point that everyone needs to understand.

Now, I’ve taken a couple hits recently because I said that the environment was the biggest issue of the 2016 election, and a lot of people said, ‘What about race issues? What about the economy?’ As Bobby kind of points out right there, the environment is connected to every single one of those. Environmental racism is a huge problem in the United States. I mean, look at where these gas pipeline leaks, oil pipeline leaks, where the fracking wells are. Look at where all of this happens. It’s not happening in the backyard of white affluent neighborhoods, is it? No, it’s not. The water crisis in Flint, Michigan. I mean, these are environmental racism issues. That is one thing that Bobby Kennedy has talked about for years, and it’s something that people need to understand.

This issue of the Dakota Access Pipeline is not just about a pipeline. It’s about protecting minorities, and Native American minorities, in the United States. They were here long before us, and we’re still, in 2016, trying to destroy their land. Again, kudos Bobby for being out there. Please keep up the good fight. I wish I could be out there with you, fighting the construction of this disgusting pipeline.