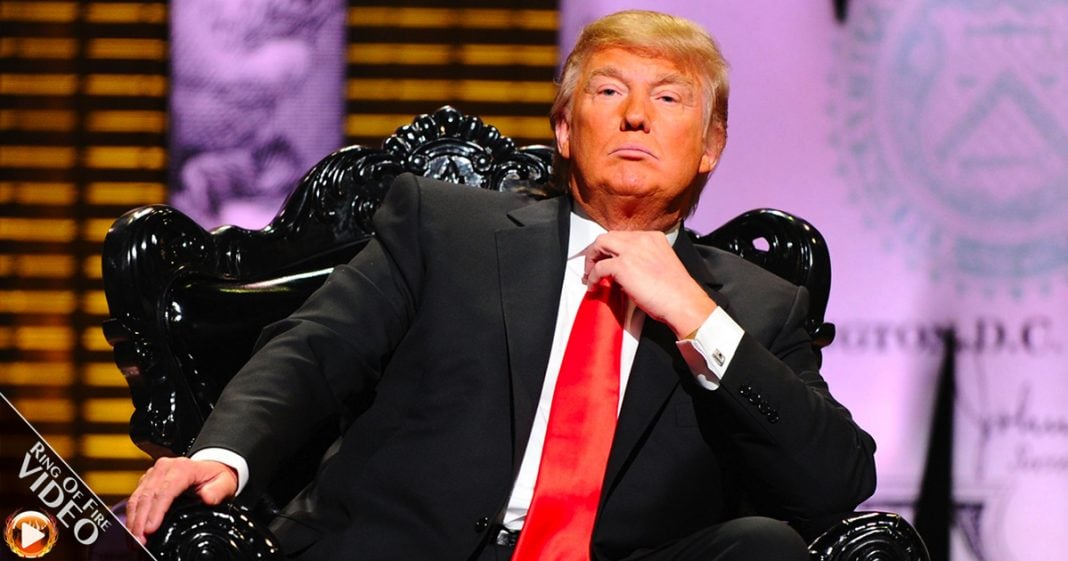 Donald Trump campaigned with a message of economic populism, and sadly, many voters fell for this con. The truth is that the Trump economy is only going to benefit those people who don’t need any help – the top 1%. The Ring of Fire’s Farron Cousins discusses this.

Donald Trump managed to convince enough voters in certain states that he should be President to where he’s going to win the electoral vote. Lost the popular vote. I think the count at this point is actually over one million votes more for Hillary Clinton than Donald Trump.

However, the reason it even became close at all is because Donald Trump hijacked the populous messages from the Democratic Party, the one that they have been talking about basically for about 100 years, somehow abandoned it in this election, and allowed con man Trump to hijack it.

There’s now reports that Donald Trump, behind closed doors in the little Club 21 or whatever it’s called, told all of the wealthy attendees, “Don’t worry, I’m going to get your taxes down,” because that’s the only thing Donald Trump cares about. The people in that room. The people in this country who consider themselves, or make enough money to be considered, part of the top 1%. Even for a guy like Donald Trump, maybe the top 1% is not good enough. Maybe it’s just the top 0.5% that he cares about. Maybe the top 0.1%.

Either way, these people who thought that Donald Trump was going to be some sort of economic populous were absolutely conned. Donald Trump told them that the economy was rigged and he was going to fix it. Well, he’s right. It is rigged, and I guess by fix it, he means make it even more rigged because that’s what he’s working on.

Rolling back the protections from Dodd-Frank is going to allow Wall Street bankers to continue the same crimes that not only caused the recession, but left millions of Americans without their money that they had been saving their lifetimes to afford. Same with their homes that they had been paying on for years. Suddenly they find themselves in default, unable to pay these inflated mortgages with the adjustable interest rates. Payday loan industry screwing over low income consumers left and right every week, charging them thousands of a percent on a tiny loan that they can never pay back now.

Donald Trump’s okay with that. He is not going to fix that. He’s not going to fix the fact that employers have to pay you overtime. He wants to do away with overtime pay. He wants to take away the requirements of Obamacare that say that your employer has to give you insurance if you work for a company that’s X number of employees. He wants to take that away. Millions of people, you’re going to lose your health insurance when Donald Trump comes into office. Most of those people are in that rust belt area, the same people who were conned by Donald Trump.

That’s how cons work. You take advantage of people who can’t afford to be taken advantage of. You don’t see people like Donald Trump being conned. You don’t see the Koch brothers getting conned, because they’re the ones doing the conning. They think they’re smarter than you. They think they’re better than you, and pulling off this con is just going to prove it to them.

Let me tell you, it’s too late to fix this election, but you can still fight back. I know he hasn’t even taken office yet, and you people want to give him a chance, but I’m telling you how it’s going to go down, because we have seen this episode of this show play out before. It happened with George W. Bush, it happened with Reagan. Con, con, con, con.

I am begging you, rust belt, middle income America, once you see what happens under Donald Trump, don’t vote for him again. Don’t fall for the BS lies that the Democrats aren’t going to fight for you, because we’re going to see a new Democratic Party emerge, I hope, that does put their faith back in the middle class, and says to hell with the wealthy elite and wealthy donors. Our support lies with the American public, and when they make that message clear, and when Donald Trump proves to you that he wants to rig the economy further for the top 1%, I would personally like to welcome you all back to the Democratic Party so that we can get this idiot out of office by the end of 2020.