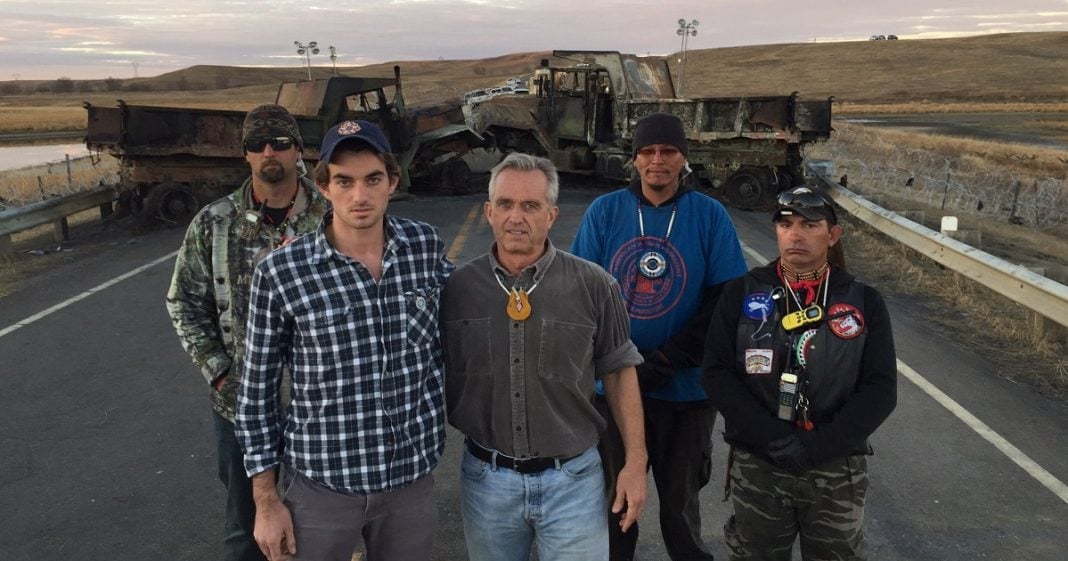 Though coverage of the Dakota Access Pipeline and the protests being held against it have been widespread in recent months, one thing that has not been widely discussed is the deeper implications of this battle.

Speaking to Collective Evolution on Tuesday, Ring of Fire’s Robert F. Kennedy Jr. laid out the true stakes in the ongoing battle against the pipeline, explaining that at its heart, this battle is one between the old energy economy and the new.

“This is kind of the spear-tip of the frontline in the battle over the transition from an old energy economy to a new energy economy. And we know that we have to do that and we know that if we really had true free market capitalism, it would have happened because today wind and solar are much cheaper than traditional, old energy fuels.”

It was then that Kennedy added the missing puzzle piece to this entire equation by pointing out that the billionaire investors in this pipeline – of which Donald Trump is also part of – need the pipeline to be placed, and ran for decades before they make their money back. And of course, the federal government is actively assisting them in their goals with no regard to the lives it harms.

“So the only way the carbon cronies can keep their domination of the marketplace is by constructing a lot of infrastructure so that we are invested. The people who invested, Citibank, Wells Fargo, and the pension funds who invested in this pipeline now have to see oil going through this pipeline for years, even long after any justification for big oil is long gone.

And of course, we’re not going to buy it in this country because we’re going to be switching to wind and solar and electric cars. They’re trying to build the infrastructure that allows them to sell it to poorer countries to continue polluting the globe, and that doesn’t make sense for anybody.”

So at the request of a handful of rich investors, the federal government is punishing lawful protesters.

“I think the most troubling part about this is that the American people are watching a company that is breaking the law. It’s an outlaw corporation that is violating American laws and then you have peaceful protesters who are saying ‘we just want you to obey the law’ and the state, instead of coming down on the side of the peaceful protesters who are advocating law and order are instead deploying the military power, the awesome military power fo the state, plastic bullets, tear gas and these sound weapons against the people who are peacefully asking for law and order on behalf of the criminal.”

We applaud Kennedy’s insightful view into the ongoing protest and ask that President Obama cease his support of corporate interests and instead pay attention to the needs of the American public.