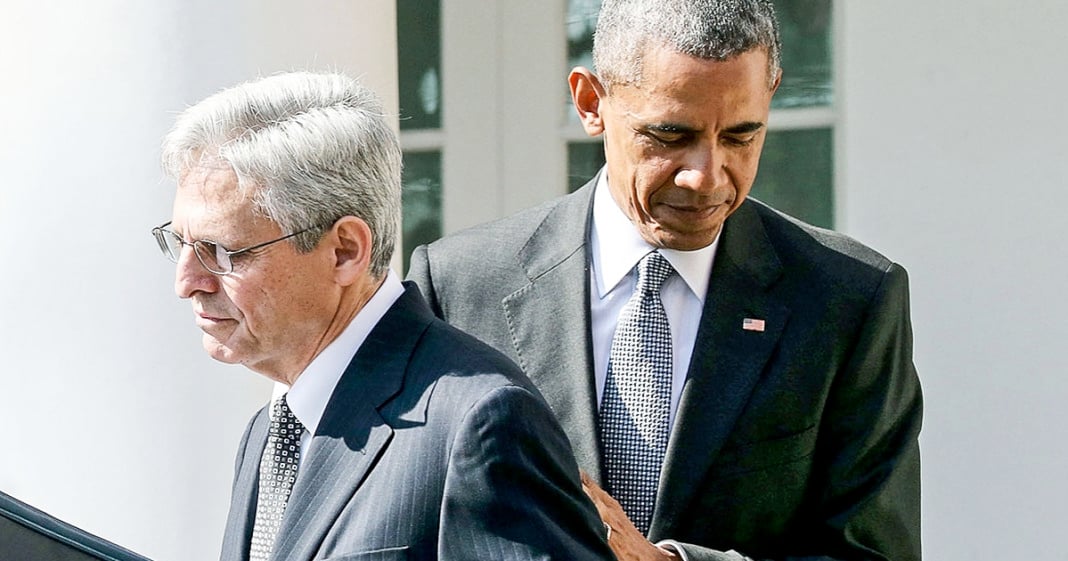 Now that the Executive and Legislative branch are set to be controlled by right wingers bound and determined to roll back all the progress we have fought for these past eight years, it will be only a matter of time before our would-be Führer, the Orange Monstrosity, will be able to cement that control for decades to come by appointing a slew of hard-right conservatives to the Supreme Court.

In his final days, President Obama has one last chance to keep that from happening – at least temporarily – through the recess appointment of moderate judge Merrick Garland. Yet, despite the fact that his legacy (not to mention the future of what democracy we have left) is at stake, the President is doing virtually nothing.

What the hell, Mr. President?!?

Constitutionally, President Obama has the power to do it. You can find it in Article II, Section 2: “The President shall have Power to fill up all Vacancies that may happen during the Recess of the Senate.” This means that the President can simply bypass this miserable excuse for a CONgress that has blocked and stymied him at every turn and install whomever he likes. It would only be a temporary reprieve; such recess appointments made under this rule automatically expire at the end of the next Senate session, which in this case, would be December of 2017. However, at this point, something is better than nothing. A moderate replacing late conservative Justice Antonin Scalia (who wasn’t a bad judge – for the 1850s) could potentially hold off the worst damage of a Trump Administration and a Repuke-controlled Congress.

Obama nominated Merrick on March 16th of this year. The President, himself no slouch when it comes to matters of Constitutional law, said at the time, “[Garland]…is widely recognized not only as one of America’s sharpest legal minds, but someone who brings to his work a spirit of decency, modesty, integrity, even-handedness, and excellence.”

He added, “To suggest that someone as qualified and respected as Merrick Garland doesn’t even deserve a hearing, let alone an up-or-down vote, to join an institution as important as our Supreme Court, when two-thirds of Americans believe otherwise… would be unprecedented.”

Garland, who is a respected and thoughtful jurist with a sterling record himself stated: “Fidelity to the Constitution and the law have been the cornerstone of my professional life.”

Considering how obsessed the right wing is with the Constitution (a document most of them have never bothered to study in any depth), you would think a statement like that would carry some weight. But again, despite their “tough talk” on the Constitution, the right wing cranks who have been dismantling democracy for decades care not a whit for that document – except when they can use it to advance their agenda.

America is descending into a black hole from which it may never emerge, at least not in our lifetimes. As his tenure in office draws to a close, President Obama has one final opportunity to stave off the worst of the damage for a time. Unfortunately, President Obama has spent most of his term trying to be a “gentleman,” and work with an opposition party that would throw him to the wolves in a heartbeat.

It’s time to take the gloves off, Mr. President. For too long, you and the rest of the well-meaning liberals in Washington D.C. have been bringing boxing gloves and Marquis of Queensbury rules to a vicious back-alley gang fight.

You have one last chance to preserve some part of your legacy – do it now.