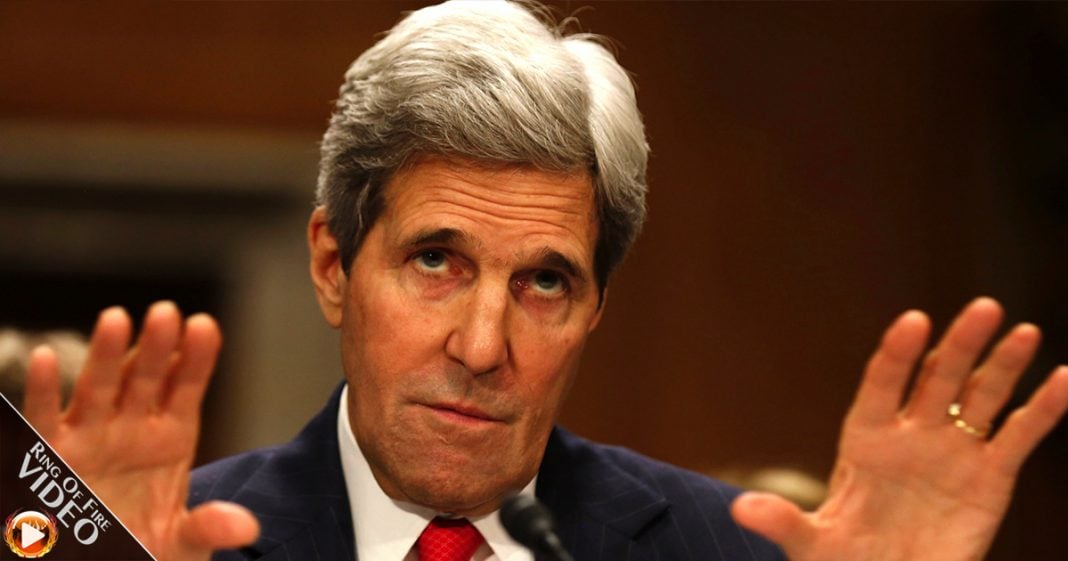 President Obama will be leaving office in 2 months, so why is Secretary of State John Kerry offering up a plan to reduce carbon emissions that he knows Donald Trump will kill? Its for nothing more than the optics of it. The Obama Administration had 8 years to address climate change and they failed miserably. The Ring of Fire’s Farron Cousins discusses this.

Right now there are climate talks taking place in Marrakech. John Kerry, Unites States Secretary of State is over there taking part in this and here’s what John Kerry’s done over there. He understands that Donald Trump is going to take office in two months. Barrack Obama has two months left in his administration and so he knows that Donald Trump is a climate change denier who wants to rollback every single environmental protection that is in place. He’s a climate change denier, so John Kerry in Marrakech tells us that here’s what the United States is going to do with two months, in this last two months, we’re going to put this huge carbon cuts on the table. We’re going to reduce our emissions below 2005 levels or at least at 80% of 2005 levels by the year 2050. Yeah? Pretty lofty goals, right? We’re just going to totally get rid of carbon in two months.

Do you know why John Kerry did this? Because he knows that Donald Trump is never going to let that happen, but he wants to have it in place. At least have that framework going, which the White House is working fervently to put in place right now so that Donald Trump has to repeal it. Then maybe, the democrats can go back and use that as a talking point in their next elections and say, ‘Look at how bad he’s been for the environment. We did this great things, they repealed them and now half the country’s under water. Who are you going to vote for now?’

I am so sick and tried of hearing these democrats in Washington tell us that we need to protect the environment and then they turn around, go to another table and sign a new lease for the coal industry to blow the tops off a mountains in Appalachia or to put a fracking well right next to a preschool. This is disgusting behavior by democrats. They don’t care about the environment, they care about winning the game because that’s what politics is to them. It’s all a game. They don’t care about you, or me, or the environment, or the wildlife, or anyone but their political lives. That is it.

The democrats are no better then the republicans on issues like the environment because even though democrats say, “Oh. We got to protect it. Climate change is real.” They still do just as much to protect it as republicans who deny climate science. Tell me how that make sense. Tell me why I should trust the democrats on this issue more than the republicans when neither of them are going to do anything about it. President Obama could have killed the Dakota access pipeline and he didn’t. He could have killed the Keystone XL pipeline on day one, but he let that drag on for over six years. This new little regulations that they want to put in place just so Trump can repeal them and then they use it as a campaign talking point, they could have done that on January 21, 2009 and they didn’t because democrats do not care about the planet and you cannot prove to me otherwise.

This is an issue I have been covering for many, many years. Both here at Ring of Fire and over at DeSmogBlog. This is one of those few issues where you’re not going to throw anything at me that I don’t already know because I’ve been covering it, I’ve been involved in it. I’ve watched oil roll up from BP on to the beaches where I spent my childhood and watched President Obama do absolutely nothing about it. I know what I’m talking about here. Obama doesn’t care about the environment. I don’t care what he says. What matters is what he does. Same thing with John Kerry and Hillary Clinton when she was in John Kerry’s position.

At any point during this administration, they could have said, ‘We’re going to cut carbon emissions by 80% by the year 2050 and we’re going to put those regulations in place tomorrow,’ and they waited until they knew they had somebody coming in office who was going to repeal them. That’s the sad story of the democrats protecting the planet.