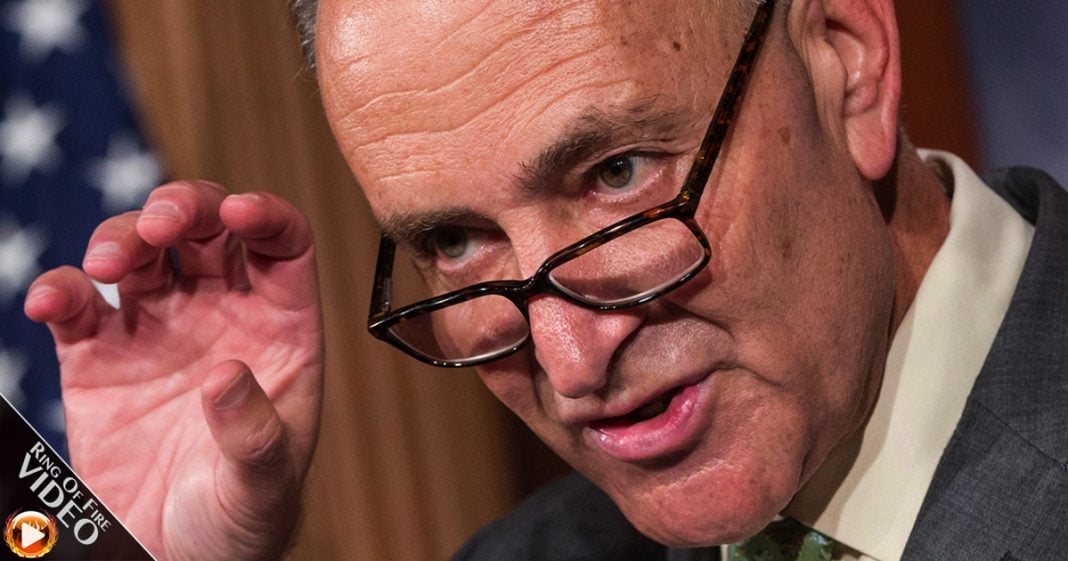 The Democratic Party needs a new direction, and they know it, so they decided to put corporate Democrat Chuck Schumer in charge of Senate Democrats. This Party clearly suffers from a learning disability. The Ring of Fire’s Farron Cousins discusses this.

So the Democratic Party understood that after their losses in the 2016 election they really needed to find a new direction, so we had the Senate leadership votes to try to find a new Senate minority leader who would lead the Democrats into this new era of progressivism, and the best they could come up with was Chuck Schumer. They could not have made a worse choice. I take that back. They could’ve put Joe Manchin as the actual leader instead of just in a leadership position as they did. Couldn’t get Manchin, so they went with Chuck Schumer. Again, this is absolutely horrible. Schumer is a guy who has repeatedly castigated the Democrats for regulating Wall Street. He has come out against a financial transaction tax to reduce risky speculation and trading, and to help boost the economy.

The guy is in the pocket of Wall Street bankers, which is exactly what cost the Democrats the 2016 election. Now he’s going to be calling the shots in the Senate because the Democrats think that he’s really the kind of guy that’s going to stand up to Donald Trump, even though Donald Trump is the kind of guy who’s already said he wants to repeal Dodd-Frank, something Chuck Schumer isn’t necessarily for anyway, so I don’t know how that logic really connects. The other big story out of the leadership votes was that both Bernie Sanders and Elizabeth Warren have been given leadership positions. Two of the most liberal members of the US Senate are now sitting on this leadership committee with some of the most conservative members of the Senate from the Democratic side. I guess maybe the Democratic Party thinks that this all evens out and now they’re middle of the road because they got conservative-leaning people like Schumer and Manchin up against ultra-progressives like Warren and Sanders.

Again though, doesn’t really make any sense. Here’s what the Democratic Party thinks that they’re doing. They think they’re throwing the Bernie Sanders crowd a bone by putting him in this leadership position in charge of outreach. They think that they’re going to be able to control Bernie Sanders as a little puppet. Hey, go out there and try to tell all these Democrats out in the country to vote for these corporate Democrats. Sanders isn’t going to do that. Sanders has never been shy about calling out Democrats when they do wrong, and it’s not going to change just because he’s got a leadership position. Elizabeth Warren is the same way.

I don’t know what the Democratic Party is attempting to do here. All I know is that clearly they learned absolutely nothing from the losses in 2016, or in 2014, and 2012, and 2010. They just want to keep going with the same old, same old corporate Wall Street Democrat that has cost them elections for eight years now. It’s not going to work. It’s not going to be helpful. It’s not going to be beneficial, and it doesn’t allow the party to really truly move forward, and so we can look for more midterm losses in 2018, probably followed by another presidential loss in 2020, unless the Democrats figure out what everyone else in the party is screaming at them, and that is abandon the corporatists and move to the left.