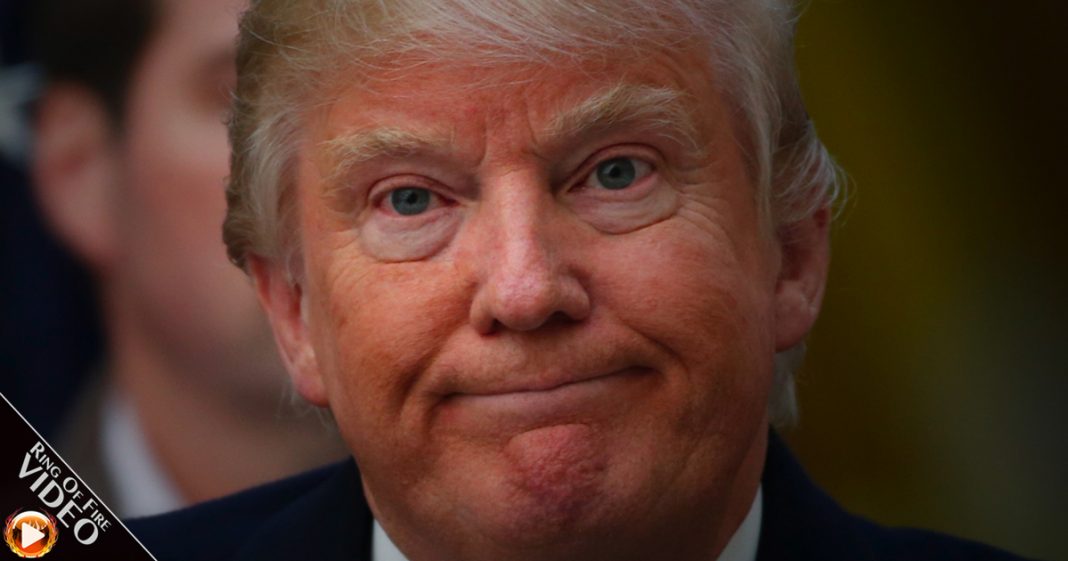 Donald Trump’s transition team is nothing short of a disaster. A week after the election, and we’ve already had staffing purges, firings, and resignations, and the staff now says that they are about a month behind where they should be in picking a transition team. The Ring of Fire’s Farron Cousins discusses this.

Already, Donald Trump’s transition team is suffering from just a complete lack of cohesiveness and, to be honest, a very shortage of actual staff. As we talked about a couple of days ago, Donald Trump, when he met with President Obama, was unaware that he was actually going to have to replace the entire staff of the White House, everything from, I guess, janitors to top officials. The new president has to do that. Donald Trump was shocked at the scope of the job of the president, which includes hiring and firing.

On that same day that President Obama and Donald Trump met, Chris Christie was ousted as basically the chief of staff for the Trump Campaign. A lot of people were like, ‘Yeah, good, Christie’s horrible,’ but here’s actually where things get a little more complicated. You see, when a new president wins an election and he goes to meet with the sitting president or even before he does, his campaign team, his transition team, whatever is put together of that, has to sign a non-disclosure memo saying that they will not reveal anything that they learn from the outgoing Administration while they’re making this transition. It’s to protect national security, protect secrets, all of that, a lot of stuff that goes on there that we’d like to know but we shouldn’t know.

Anyway, Chris Christie was the guy who had signed that, but once Chris Christie left, that confidentiality agreement became null and void because Christie was no longer a representative of the Donald Trump Campaign. As of right now, as of this recording, that confidentiality notice has not been signed by anyone from the Donald Trump Campaign. Now this is going to prevent any future talks from being able to take place because the Obama Administration legally is not allowed to just trust the Trump Administration, and to be honest, that’s probably the best call.

Now this may all seem kind of trivial, just whatever. It’s a document, just sign it, but it underscores the larger problem of the fact that the Trump Campaign has no idea what they’re doing. They can’t keep anyone on this transition team because nobody wants to be associated with it, with the exception of probably Rudy Giuliani, John Bolton, and a couple other white nationalists out there who could be getting high posts within the Trump Administration. Beyond that, they have thousands of jobs to fill, and nobody wants to take them.

Nobody wants to be associated with the basket of deplorables that’s now going to be living in the White House. Nobody wants to be associated with an Administration that is very clearly going to be a failure. Nobody wants to be a part of it, and that’s what’s plaguing the Trump team. In fact, when they met with Obama, a Trump Campaign spokesperson said that they’re actually already a month behind where they should be in developing this transition team and laying out who is going to be a part of the new Administration, something Hillary Clinton did back in July. That’s how confident they were. They already had this set. They knew who was going to go where. Trump honestly didn’t think he’d win, so they didn’t bother to do this.

Look, it’s funny, but at the same time, it’s also very serious. There is a good possibility that if Donald Trump is not able to find quality people to fill those positions, which when you’re only looking among Republicans is almost impossible anyway, but if he can’t find anybody with half a brain, he’s going to have to go to the people that don’t have brains, the other Steve Bannons out there in the world. That’s even more terrifying. As bad as Rudy Giuliani would be, how bad is it going to be if he has to appoint, you know, David Duke’s brother. I don’t know if he has a brother, but I’m just throwing that out there.

Those are the kind of people he’s going to have to reach out to if we can’t find a Republican with half a brain to join this Administration. That is a scary thought. It’s scary for national security, it’s scary for domestic policy, and it’s scary, to be honest, to the entire planet, because they understand what’s at stake if President Trump puts the wrong person in charge of something. They know that what happens in the U.S. has ramifications all over the globe. Just like when Brexit happened, it affected the markets all across the globe. Everybody is connected in some way, and if Trump puts somebody dangerous in one of those positions, it could be a global catastrophe.