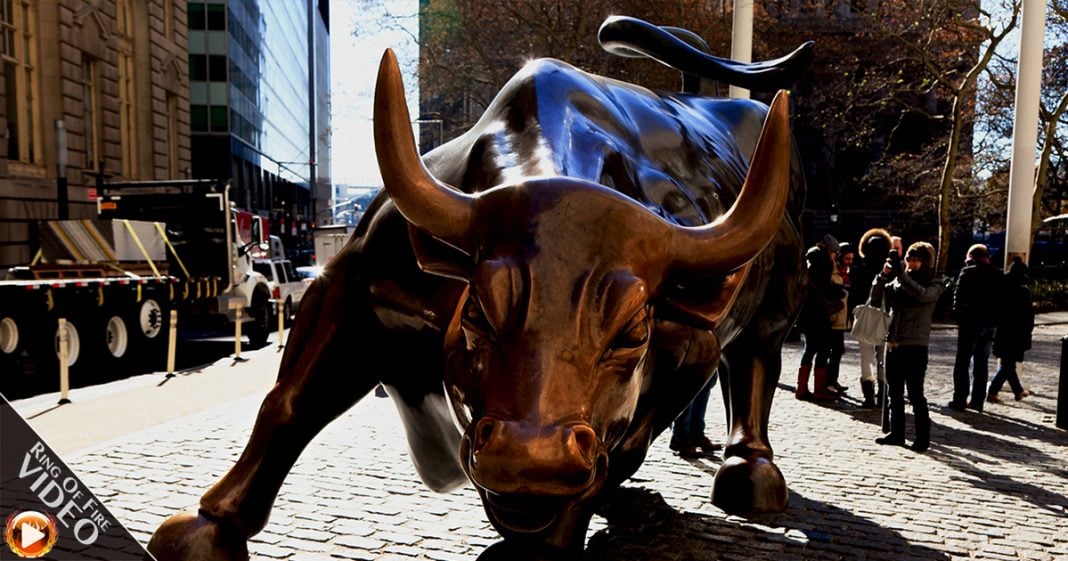 Executives at Morgan Stanley have already made $10 million off of Trump’s promises to roll back financial regulations. They are prepared for a new era of greed where they can screw consumers and pocket the profits. The Ring of Fire’s Farron Cousins discusses this.

If there was any question about what kind of president Donald Trump is going to be, I think that it was answered last week when executives at Morgan Stanley made $10 million, pocketed $10 million in the immediate days following Donald Trump’s victory. Now, on election night, as the results were coming in and it was clear that Donald Trump was going to win, markets began to slump, huge drop of about 500 points, but the next day, Donald Trump said something that caused the markets to rebound in a way that we have not seen in a very long time. It was that rebound that caused stocks at Morgan Stanley to rise, I think, by nearly a fifth of their total value.

The CEOs, the executives, including the chief executive, began to sell off their stock options, exercise those options and ended up pocketing $10 million in total because of what Donald Trump said. What did he say? He said that once he gets into office, he’s going to repeal Dodd-Frank. He’s going to loosen financial regulations. That’s what Donald Trump has pledged to do for Wall Street. Already, it took four days for them to make $10 million off of something that Trump said, and that’s what’s going to happen during the Trump administration. It’s very sad because we’ve seen this episode before.

Remember what happened when George W. Bush came in? Lower taxes for millionaires and billionaires killed financial regulation on Wall Street. Hey, Wall Street had a great time. They were making billions and billions of dollars, not having to pay taxes. Life was good. Then the market crashed. But you know what? For those executives, life was still great. They were still making tons of money from ripping off consumers. It was the consumers, the bottom 99% that got screwed and screwed hard, and that is what is about to happen with the Donald Trump administration. If you think otherwise, you are kidding yourself. Trump’s already pledged to do it.

We’ve seen what happens when they deregulate Wall Street every time, like clockwork. There is no question here because there’s no morals there. We know what these people will do. Just like when the crash of ’07 and ’08 happened, they made money because they bet against their own investments. They bet against mortgages. They bet against American consumers, so when those American consumers defaulted on their loans, the big banks already had insurance policies on those so they made the money back and they still got to take the home, so when they eventually sold that home, they got the money back again. They profited twice every time you defaulted. That’s sick, it’s disgusting and it’s unfair, and that is the America that Donald Trump wants to return us to.

Maybe that’s what he means by, “Make America Great Again.” Maybe he means, “Make Wall Street Great Again.” Don’t kid yourselves. Wall Street has not had a tough time under President Obama. When Dodd-Frank rolled out, it was supposed to be a hell of a lot tougher than it actually ended up being, but financial lobbyists were allowed, and this is according to a report from The Nation several years ago, financial lobbyists were allowed to come in, take a look at it and help lawmakers rewrite it. That happened.

The lobbyists and the lobbyist lawyers got their hands on that legislation, fixed it to where it didn’t hurt them so much, and then it was passed. Life hasn’t been bad for Wall Street bankers, but great is never good enough for the caliber of greed that we see every day from these bankers who only know one thing, and that is get as much money as possible. That’s what capitalism has done to them. These are corrupt souls that are beyond saving at this point, and they are running our financial markets, and in the next couple years, they’re going to ruin our financial markets.