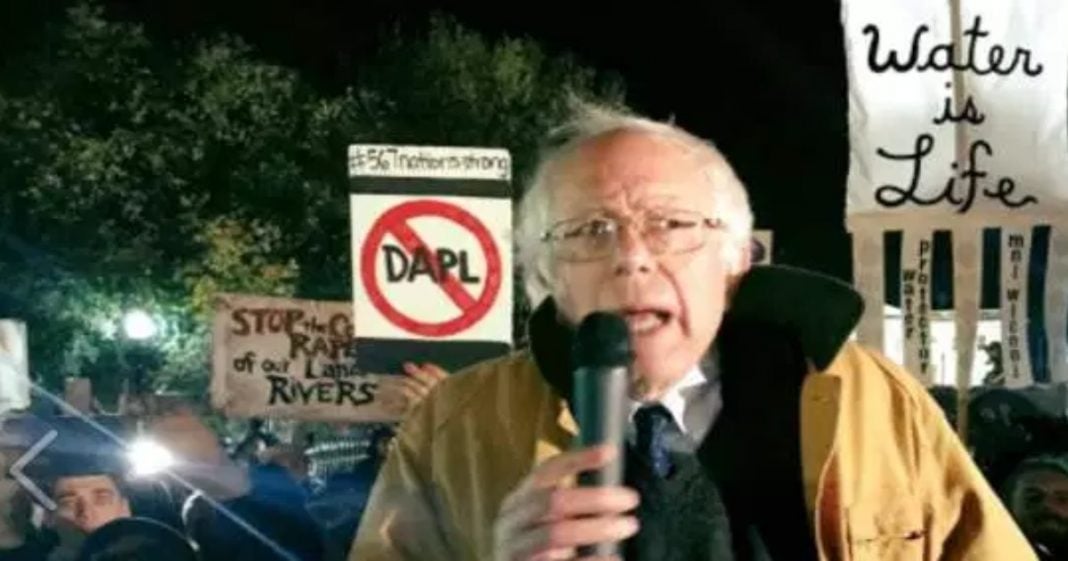 Joining the NoDAPL protest on the White House lawn for the second time since protests began, Senator Bernie Sanders addressed the crowd and offered a unique solution for the ongoing struggle.

Sanders has been calling on the president to halt the pipeline for months to no avail, and on Tuesday, the progressive Senator called on President Obama to stop the pipeline by whatever means necessary.

“To president Obama, in any way that you can: stop the pipeline. And if there are other approaches, such as declaring Standing Rock a Federal Monument, let’s do that.”

It’s an out-of-the box solution that only a political outsider might have considered – it is easily within the president’s power, and would show progressives that to at least a small degree, Obama still wants to honor and protect those who he serves. Will he do it? When pigs fly. But if Sanders were president, he would do it without blinking. That is the difference between a progressive and a corporatist.

The Senator joined protesters on the national day of action which spanned more than 300 cities across the nation – and the globe.

Continuing his remarks, Senator Sanders addressed the dark shadow ahead of the fight against the pipeline and all other environmentally-disastrous energy gathering processes.

“We have a new president coming in who wants this country to become more dependent on fossil fuel. What we have got to tell Mr. Trump and everybody else; we are not going silently into the night.”

Though the ongoing protests have been fraught with fear and conviction, the victory by Donald Trump ads a much more ominous deadline to the deal; come January 21, all environmental efforts will be fought by a climate denying president who has deep financial ties to Big Oil.