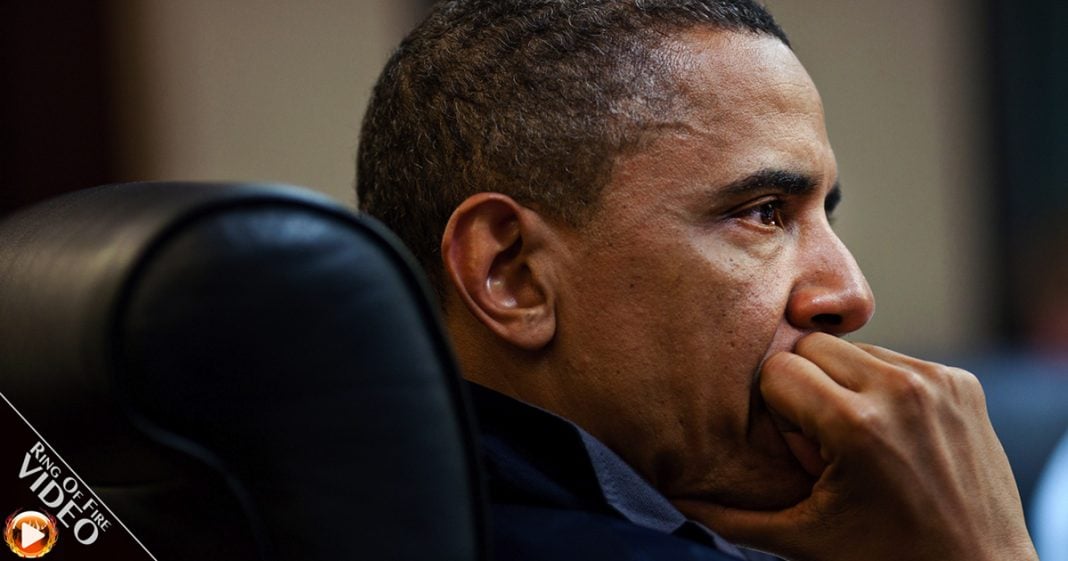 President Obama should be regretting all of the things that he didn’t accomplish as president, because now all of those “tools” like domestic surveillance and drone warfare will be put into Donald Trump’s hands. The Ring of Fire’s Farron Cousins discusses this.

Over the years, we’ve taken a lot of heat for being critical of president Obama. You know, we’ve talked about the domestic spying programs, we’ve talked about his reluctance to pull out of Iraq, to pull out of Afghanistan, to close down Guantanamo Bay, his excessive use of drone warfare, and things of that nature. Now, Democrats attacked us relentlessly saying we’re too hard on the president. You should give him time. Let him do his thing. If he’s still doing this, there’s obviously a good reason why he’s continuing the Bush policies.

Let me tell you something now. All of those things that Obama didn’t do, like he didn’t end domestic spying, he expanded drone warfare, Guantanamo Bay is still down there, Donald Trump now controls those things, or at least he will in a little under two months. Donald Trump now controls the domestic spying operations in the United States. For a man who consistently promises to punish his enemies, that should scare the hell out of every single person in this country, republican or democrat, because you can’t tell me that Donald Trump is not going to use these programs to his own benefit.

Same thing is going to happen with domestic spying. It won’t be limited to “potential terrorist suspects.” Trump’s probably going to use it to spy on rival corporations, the republicans who didn’t want to support his candidacy, democrats. We already have evidence that, over the years, corporations led by the US Chamber of Commerce spied on progressive organizations and protesters, and tried to dig up dirt on them. That was just the US Chamber. We basically now have the US Chamber sitting in the White House as Donald Trump, and that’s going to continue. He’s got the playbook. He saw how successful these other groups were with it. Going after journalists. This is terrifying. If you don’t think it is, then you don’t fully understand what this man is capable of, and the little tools and tricks that he’s going to have at his disposal.

Again, it all goes back to president Obama, his failures. Had he ended the domestic spying program, had he backed off on the drones, had he closed GITMO like he promised to eight years ago, if he had pulled all of our troops out of the Middle East where they’re fighting un-winnable fights, we wouldn’t necessarily be in such a bad situation today, but we are. I’m sorry, in this situation, the only person that you can blame is president Obama for failing to live up to his promises and now handing over these disgusting tools of the United States to Donald Trump.