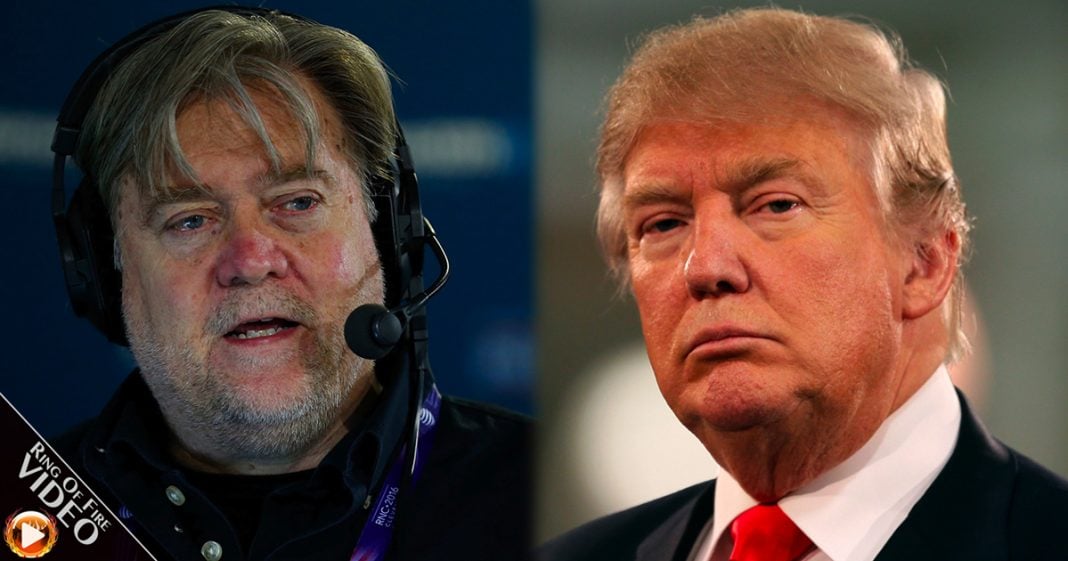 Donald Trump has selected Steve Bannon, a known anti-Semite, to be his chief strategist and senior counselor, throwing away any hope that Trump’s campaign trail racism was just talk. The Ring of Fire’s Farron Cousins discusses this.

So by now, I’m sure everybody watching this understands that Steve Bannon, the guy from Breitbart is going to be Donald Trump’s chief strategist and senior councillor in the White House and I’m sure most people watching this also understand that Steve Bannon is a huge anti-semite. A lot of folks are calling him a white nationalist. There’s a little debate about that, but there’s no question, this guy holds deeply racist views. He helped to push Breitbart in a incredibly racist and misogynistic direction, which then made Breitbart the haven for the alt right and Trump supporters to go on there and hate on Jewish people, on black people, on Muslims, on Latinas, Hispanics, whatever. They hated on all of them there. And it’s because of Steve Bannon.

But here’s the part of the story where things start to get a little screwy. You see, there’s a lot of people on the right, and to be honest, there’s even some on the left who have said, ‘You know what, let’s take a step back, Donald Trump won. Maybe we’ll give him the benefit of the doubt. Perhaps all of this racism and misogyny that came out during the campaign was nothing more than a talking point to kind of get his base energized. Now that he’s elected maybe he won’t be so bad.’

Look, we are less than a week past the National election, and Donald Trump has already supported or promoted this anti-semite, borderline white nationalist, to be his chief strategist. This man is going to have significant influence over policy in the United States for the next four years. So if anyone out there still thinks that maybe we should have a “Wait and See” approach to Donald Trump, just look at Steve Bannon. Look at Reince Priebus. I mean, this is nothing more than a Cabinet of supremacists and DC insiders. It is literally the worst of the worst that the Republican party, that the United States, has to offer.

And that’s what Donald Trump is already packing into his Cabinet. And trust me, as the days and weeks drag on until Donald Trump finally takes office, we’re going to see more stories like this. Steve Bannon will not be the only disgusting character, the only disgusting little rat that’s going to be scurrying around Donald Trump’s Cabinet. It’s going to be packed to the brim with them. That basket of deplorables is going to be all over that White House, and unfortunately at this point, there’s not much we can do, because Donald Trump managed to convince a significant portion of the population that, ‘Hey, a little racism’s okay, because you wouldn’t want a woman in the White House.’