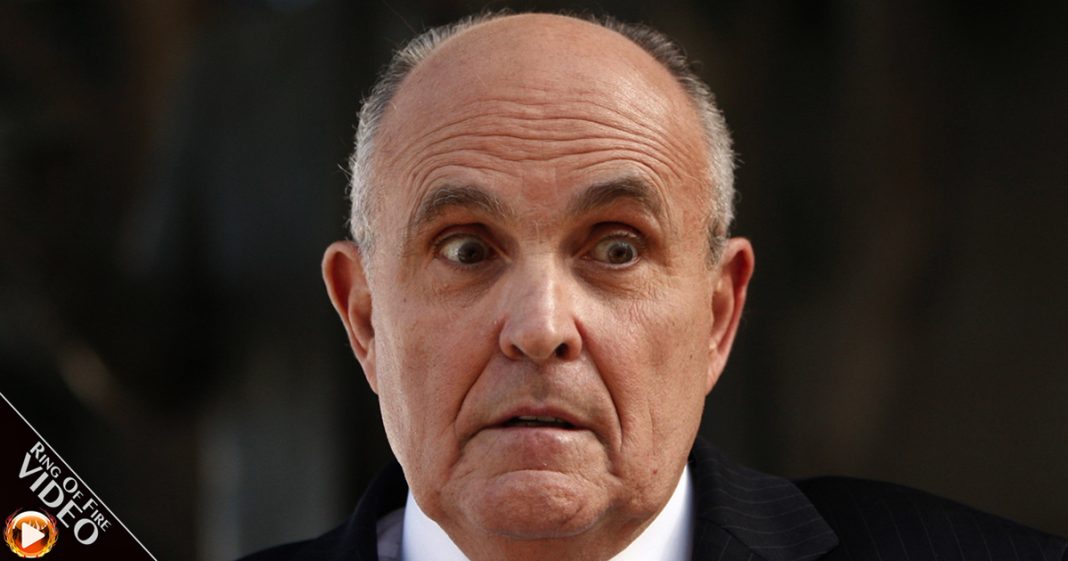 Rudy Giuliani has solidified his disconnect from reality by telling ABC News that the people in the streets protesting Donald Trump are simply over-reacting and that they are exaggerating the threats that he poses to our democracy. The Ring of Fire’s Farron Cousins discusses this.

This past weekend Rudy Giuliani went on ABC’s This Week, basically, still acting as a Trump surrogate. He’s pretty certain he’s going to have a spot in the Trump administration and he likely will, but, anyway, Giuliani goes on these Sunday morning shows and he says, ‘Listen, all these protesters, all these Liberals out in the street saying that Donald Trump is a huge threat to democracy, listen, they’re exaggerating, this is overblown, they need to calm it down and relax, hey things are going to be just fine under President Trump’. Listen Rudy, I know that you have been disconnected from reality for many, many years, at least since your 2008 presidential campaign. Ever since then you really seem to have lost your mind. Now, I’m going to tell you something Mr. Giuliani, that I don’t think you know or if you do know then you’re just straight up lying to the American public. Here it is, two days ago the FBI put out a report saying that yes, there has been an increase in hate crimes in the United States against minorities and Muslims since the election of Donald Trump. Four days after the election they already put out this report saying there is a direct link between the two, not a correlation, a causality.

The election of Donald Trump has brought out the worst in the United States. The report also happens to mention the fact, as other reports have mentioned, that sense Donald Trump’s campaign violence against Muslims in the United States has increased exponentially, so Mr. Giuliani what threats exactly are overblown? The guy appointed a white nationalist to serve as his chief strategist. There is no exaggeration when people take to the streets and say that our democracy is in danger of dying because it is. I mean it’s either the people going into Donald Trump’s cabinet are either racists or they’re corporate lobbyists. You can’t get worse than that. Really, can you think of any kind of worse person in the world to stuff in your cabinet? White nationalists and lobbyists who only think about corporate profits. That’s what we’re going to get from the Trump administration. It’s going to be like the George W. Bush administration, but with 1000 times more racism. There is no good outcome here. Giuliani, for him to say that these people out there who are technically exercising their first amendment rights, that they’re exaggerating this.

I think Giuliani needs to go see a doctor and probably not just one doctor, like a whole team of specialists needs to be working on this guy, get him a CAT scan, check out the brain, make sure everything’s functioning properly, and if it is we get rid of that team of doctors, we bring in the team of psychiatrists and psychologists, try to get to the root of what really is going on in that man’s head because this isn’t normal. He is either completely disconnected from reality or he is one of the biggest liars in American history, either way it doesn’t matter. Giuliani, you have problems, you need help. Leave governing, politics, all of that to people who are still thinking clearly and people who have a solution or are coming up with solutions to deal with the mess that your party created.