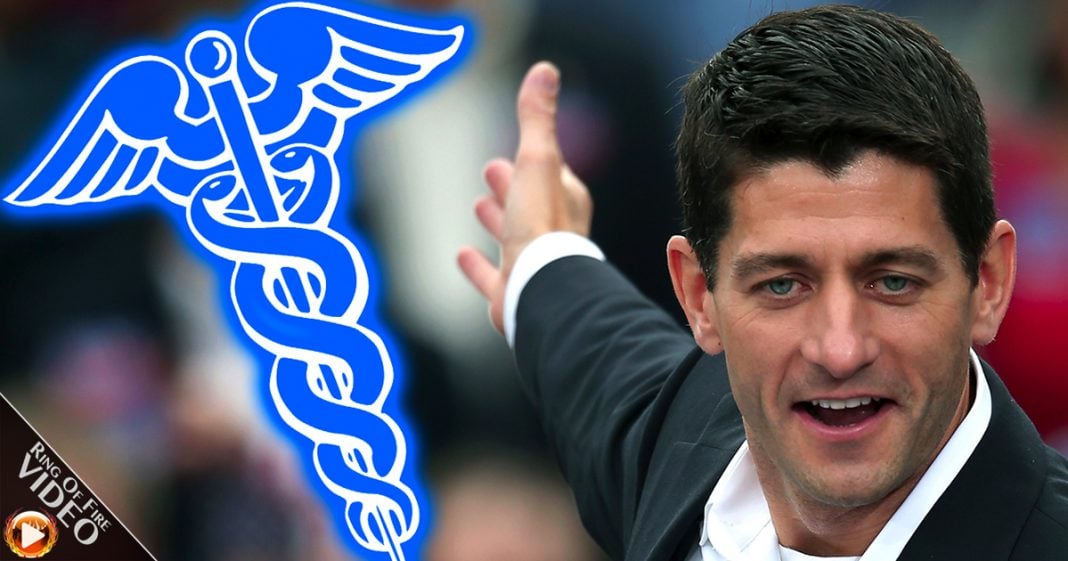 Paul Ryan is ready to dismantle this country once President Obama leaves office, and his first plan is to effectively kill the Medicare program and force seniors to purchase insurance from private health insurance companies that will rip them off. The Ring of Fire’s Farron Cousins discusses this.

A few days ago, Paul Ryan speaker of the house, the guy that’s going to be speaker of the house when the new Republican-controlled Congress convenes in January, told Fox News Bret Baier a few days ago that his first order of business is going to be dismantling Obamacare, specifically. Paul Ryan wants to dismantle not only Obamacare but Medicare. During the interview, Paul Ryan told Baier that Obamacare has actually drained the finances of Medicare, the whole system is going broke, it’s a failure, everything needs to be redone from the bottom up.

Now, first of all, that’s not true. In fact Medicare has more money today because of Obamacare. Experts agree that Obamacare has increased the solvency of Medicare by at least a decade. Paul Ryan’s first point about Obamacare weakening Medicare’s finances, absolutely false. Here is Ryan’s plan. According to him, those people who are already enrolled in Medicare, don’t worry, you get to keep your coverage at first. After that, we’re going to let the private insurance companies come in, kind of take over, they’re going to offer you different plans that cover different things, it’s basically going to be a cash for play thing, which is what regular health insurance is, and the private industry is going to handle it just so much better than the Federal government ever could.

Furthermore, those people who are not yet on Medicare but will be some day, don’t worry because you’ll be able to just buy health insurance, and the government is going to give you some kind of subsidy to help cover it, which really doesn’t do very much considering the fact that the subsidies come in the form of tax rebate, so you’ve got to wait a full year before you ever get that money back, and you are always going to be one year behind.

Doesn’t work that way Paul Ryan. We have a system in place, is it perfect? Hell no. Does it work? Hell yes. There is no reason to dismantle Medicare. It’s not going to save you any money, all it’s going to do is put more money in the pockets of the private health insurance industry that’s already raping consumers left and right all over this country. Those are the same people who fill your campaign coffers Paul Ryan, the same people who fund your campaigns, the same people who help make you speaker of the house. That’s why you’re doing this. Don’t try to sell this to American citizens as part of your, “a better way,” plan that you’ve been rolling out for the last six months. That’s total nonsense.

You are doing this to repay the people that put you in the office, that allowed you to keep your seat, that made you speaker of the house. This is ridiculous, you’re going to screw over and potentially kill American citizens who will not be able to afford that private health insurance. Or they’re going to be rejected because of some kind of preexisting condition. Considering the fact that all of them are going to be aged 65 and older, it will be damn near impossible for them to enter the private market and buy health insurance. But hey, that’s okay with you Paul Ryan, right, because you’re still going to get that campaign money whether or not people live or die. It all works out for you in the end.