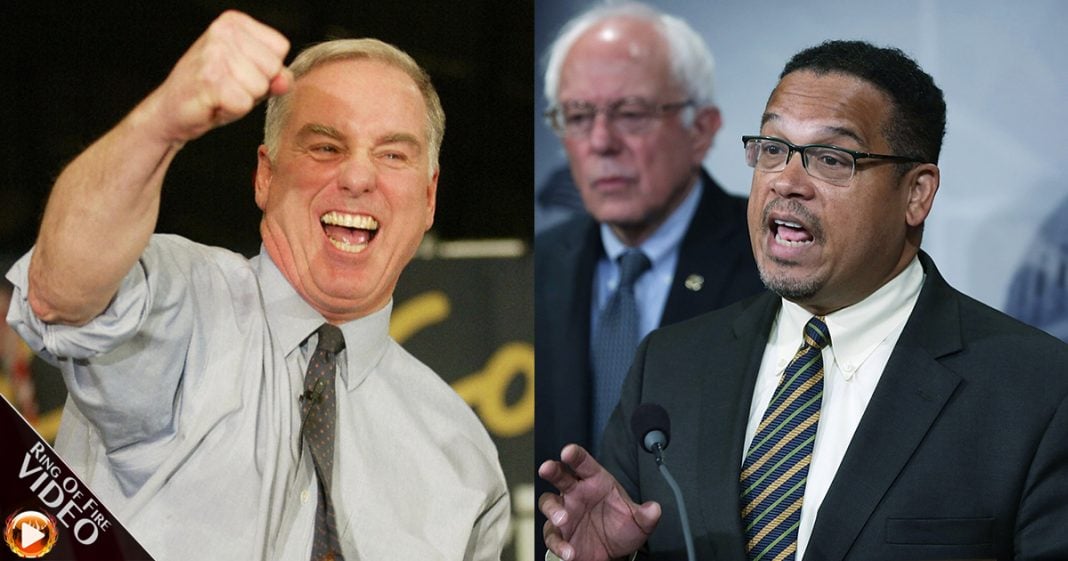 Keith Ellison has been endorsed by both Bernie Sanders and Elizabeth Warren as the person to replace Donna Brazile at the DNC. But former Chairman Howard Dean has thrown his hat into the ring, too. Who is a better progressive representative? The answer is clearly Ellison. The Ring of Fire’s Farron Cousins discusses this.

The Democratic Party is in shambles after the election losses, the DNC needs a new chair, and Howard Dean, who used the chairman of the Democratic Party, was one of the first people to throw his hat back into the ring and say, “I want to be the Chairman of the Democratic Party.” That’s great. Howard Dean, again, he used to be the Chairman. He was decent. Not great, not horrible. He did develop the fifty state strategy that the Democratic Party then ignored, so he had that going for him which was a good plan. Democrats just weren’t smart enough to follow it. In the time since he left the DNC, do you know what he’s done? He’s been a lobbyist for big pharma for the health insurance industry. Basically, out there fighting the bastards who are raising costs on American consumers every day. He’s fighting for them, not for the American people anymore. He gave up. He sold out. That is very definition of a sellout. He gave up his ideals in order to make more money. Bottom line. That is Howard Dean.

You know who hasn’t sold out? Keith Ellison. Congressman Kieth Ellison. He is an African American Muslim who’s been serving our country since 2007. He has been endorsed by Bernie Sanders, by Elizabeth Warren. They want him to be the new Chairman of the Democratic National Committee. To be honest, looking through Ellison’s record, I can’t find a reason why he shouldn’t be. Not only does he have a great record of fighting for people and avoiding the corrupting influence of money in politics, but as an African America, as a Muslim, he represents everything that the Republican Party stands against. He would be the one to bring the Democratic Party back into the future. Say, “We’re better than that.” Help to bring in more people who understand that racism isn’t the way forward. That’s why Ellison is such a good pick for this.

Howard Dean, you used to be such a great guy, but you absolutely sold out the American public. You have no place within the Democratic Party itself, let alone running it. You care more about big pharma and the health insurance industry than you do the American public. That’s why, just a few months ago, you came out and said, “A public option for health insurance? That’s a stupid idea. We should never do that.” Yeah, right there. That remark? That disqualified from any leadership position within the Democratic Party ever. You’re done, Howard Dean. You were the past. Keith Ellison is the future, and he is a future that I can absolutely get behind as a registered Democrat.

If it’s somebody like Howard Dean who takes over, or if they give the job permanently to Donna Brazile, who effectively was just as bad as Debbie Wasserman Shultz in the tank for Hillary Clinton, ignored all the warning signs, then you can count me out. I’m sure you can count out a lot of democrats. Maybe that’s the way we get a viable third party, because if you put a corrupt corporate Democrat back at the top of the DNC, you are going to see half the party, at least, bail on you. Who knows? Maybe that’s what you deserve.