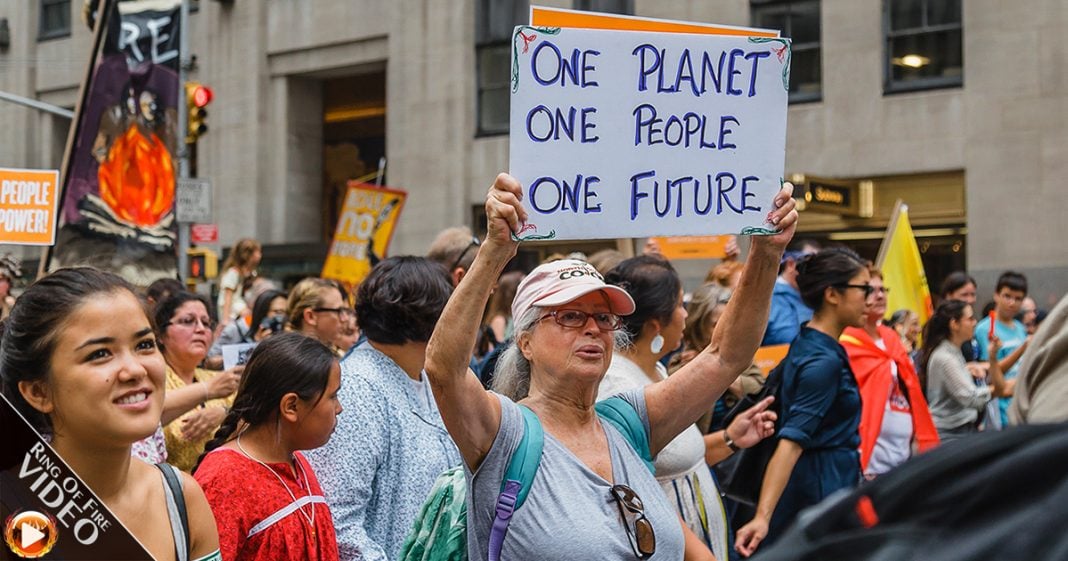 There’s no other way to say it – climate change is the greatest threat to the United States, and to the entire planet, and the United States just elected a climate change denier to be our president. But Democrats share some of the blame on this issue, because they failed to address it in a way that would have gotten people active. The Ring of Fire’s Farron Cousins discusses this.

It’s no secret that Donald Trump is going to dismantle the very few environmental protections that we have in place in the United States. He doesn’t believe that climate change is real. He doesn’t believe that any action should be taken. Basically, to hell with anyone living at or below or only a few feet above sea level. Well, that was to be expected. We knew his positions before the election. We knew his positions years ago but that doesn’t change the fact that neither Trump nor Hillary to a large degree discussed the issue of climate change during this campaign.

Once Bernie Sanders was out of the race, discussion of climate change dropped. Hillary Clinton mentioned it one time in the presidential debate, one time, and she didn’t specifically say, “Climate change,” so she really shouldn’t get credit for that. She did run an ad for about a day that talked about the need to protect the environment and that’s it. Climate change was completely ignored during this presidential election and that’s not an overstatement. Yeah, she said it once or twice. Not enough. Climate change was the biggest issue here. We had eight years of complete inaction from George W. Bush, followed by eight years of almost no action by President Obama. He signed the Paris Accords.

We got the new EPA Clean Power Plant Rule that has yet to go into full effect because Republicans are blocking it, so really there’s no success to speak of because no plans have actually been implemented. People are already dying in the United States because of extreme weather brought on by climate change every single year. Right now, in Miami, there is seawater in the streets. No rain. That’s just where the tides go now. The same thing is about to start happening in North Carolina and other places along the East Coast of the United States because that’s just where the water is now. Here’s the thing. This is something a lot of people don’t understand. When global temperatures rise, two, three degrees is what we’re looking at here by the mid-century, I believe, when temperatures rise, water molecules expand.

That is essentially what creates these sea level rises from climate change. It’s not because the polarized caps are melting and raising the overall level. It is because that heat now trapped in the ocean causes those water molecules to expand, and that’s what rises, raises the sea. That’s what’s happening, so when you see things talking about the fact that we’re going to have a one, two, three degrees sea level rise, that is a big deal. It’s not the difference between walking outside and having it be 70 degrees versus 73 degrees. It’s what’s happening to the ocean, and that’s something that has never been discussed on the corporate media or during the campaign, and that’s what’s so infuriating about this.

Climate change is killing people. Climate change has killed more people in the United States since September 11th than terrorist attacks and yet all we heard during this campaign was, “Oh my God. We got to stop ISIS. They’re going to come kill us. We got to stop immigrants. They’re going to come kill us.” That is literally what Donald Trump said. Meanwhile, people were dying from heatstroke because of the increased temperatures. People were dying in wildfires because of the droughts. People were drowning in floodwaters because of climate change, and nobody, not Donald Trump, not Hillary Clinton, not anybody in the current White House administration and not a soul in the corporate controlled media gave a damn about any of that.