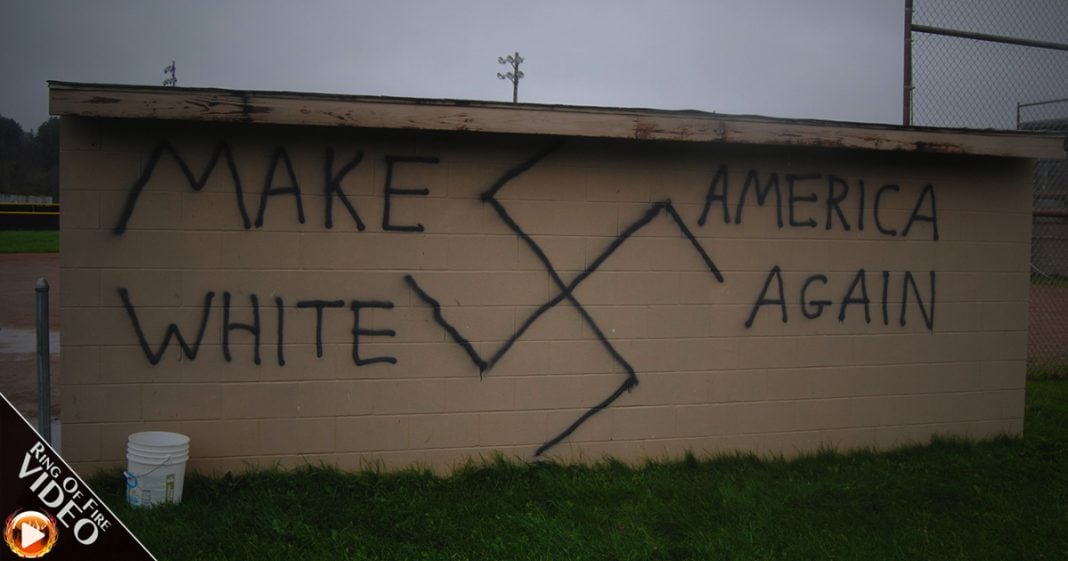 As expected, Donald Trump’s victory has emboldened the hate mongers in the United States, and the last few days have witnessed a huge increase in the number of racially-motivated assaults on US citizens in the name of Trump. The Ring of Fire’s Farron Cousins discusses this.

Anyone who followed the 2016 election closely, specifically followed the work of the Southern Poverty Law Center of people like David Neiwert absolutely knew what would happen if Donald Trump won the election because those groups, those journalist explained in very clear detail, Chauncey DeVega at Salon, another great friend of Ring of Fire, another person who warned us extensively about this. They told us, “If Donald Trump wins, it is going to embolden and empower racists, bigots, all across this country.”

Here we are just a couple days pass the election and you know what’s happening? Non-white children in schools across the United States are being verbally assaulted by white students who support or I guess who’s families support Donald Trump and they’re doing it in the name of Donald Trump. “This is Trump’s America now.” It’s what they’re telling these kids. “Build the wall. Build the wall.” Chants like that have been heard in schools across this country. Adult Muslims on the street have had their head wraps ripped off, saying, “You’re not welcome here anymore, Muslim.”

This isn’t okay. This is stuff that happened a hundred years ago and we’re relieving history. There is literally a parallel between what these Trump’s supporters are doing and what the Nazis did after Hitler first came to power. I mean, it’s textbook. We’ve seen this before countless times, folks. We have a factious that’s about to move in to 1600 Pennsylvania Avenue.

He doesn’t care that his supporters are out there threatening people of color or Muslims or anyone that’s not a white christian. He doesn’t care. He encourages it. He’d said as much during his campaign. There is no other way to say this. This is going to be a dark four years, folks. This is going to be a very dark four years. It’s just one of those times where unfortunately, we don’t have an answer right now. All I can say is that if you see it, report it. There are still some good police officers in this country. There’s some very great attorneys if this happens to you or if you see this happen to someone, document it, film it if you can and get the word out. Let’s shut this people down the only way that we know how.