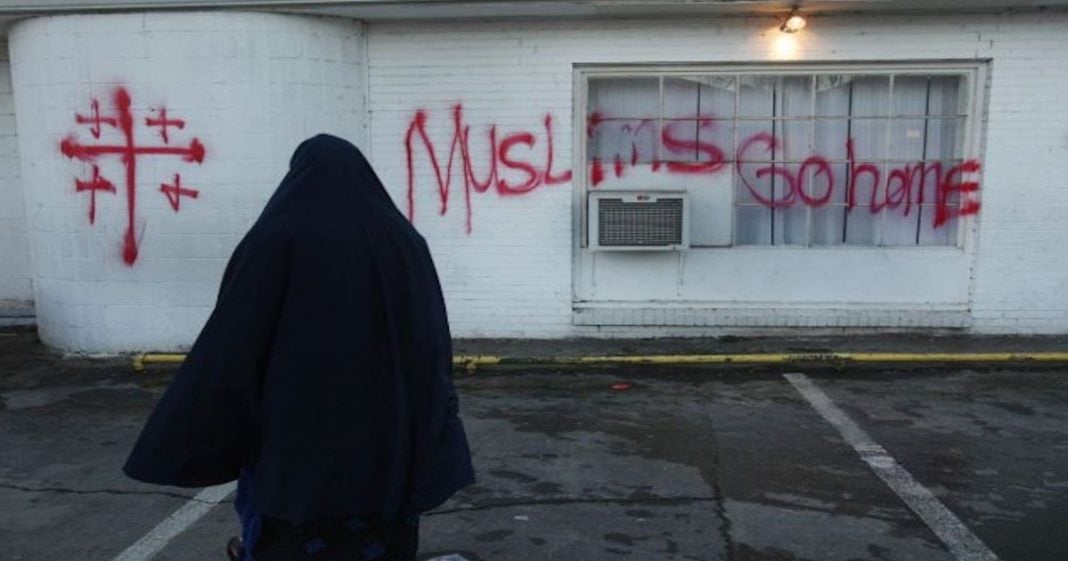 Donald Trump’s website still calls for “a total and complete shutdown” of Muslims from entering the U.S., despite protests from Trump spokesman, Steven Cheung who told USA Today that “”We never said ‘all’ Muslims.” It turns out, Trump will likely have the authority to carry out his promises, regardless of which Muslims meet his criteria to stay or go.

The controversial statement, made in December 2015, was briefly removed from Trump’s website on Election Day before reappearing on Thursday. In it, Trump insists on banning Muslims from entering the country until U.S leaders can figure out “what the hell is going on.”

“We have no choice,” Trump stated. “We can be politically correct or we can be stupid, but it’s going to get worse and worse until we determine and understand this problem and the dangerous threat it poses. Our country cannot be the victims of horrendous attacks by people that believe only in Jihad.”

Trump also calls for establishing new screening procedures to keep terrorists out of the United States and suspending immigration from some of the most “dangerous and volatile regions of the world that have a history of exporting terrorism.”

To root out radicals who may already be in the United States, Trump wants to establish a “Commission on Radical Islam to identify and explain to the American public the core convictions and beliefs of Radical Islam, to identify the warning signs of radicalization, and to expose the networks in our society that support radicalization.”

While those promises appeal to his base and play on fears of terrorism, there is good reason for Muslims and non-Muslims alike to be concerned. How exactly will Trump define “Radical Islam,” much less the warning signs and those who support it?

Few would argue every effort should be made to prevent and protect America from terrorists attack, but numerous law enforcement agencies including federal, state, and local, as well as the U.S. military are already getting billions of dollars to do that. If Trump doesn’t like the job they’re doing, he should take a look at revamping the procedures already in place. Creating a separate unit for the sole person of targeting one segment of the population sounds like a breeding ground for discrimination, resentment, and civil rights violations.

Trump’s sweeping statements and vague generalities leave room for speculation that any group Trump decides is “radical,” not just Muslims, can be a future target for investigation.

However, can Trump actually ban Muslims or any particular group of people, from entering the country? According to Vox media, several U. S. immigration experts say, “Yes.” They explain Congress has already granted the president power to alter immigration rules without congressional approval and as long as the ban was designed properly, it would likely survive any court challenges. A move like that could also damage America’s reputation, as well as the economy, and worst, bring down even more hatred from radical terror groups like ISIS.

Many Muslim Americans worry if there’s a safe place for them in Donald Trump’s plan to “Make America Great Again.” They’re not the only ones who should worry. Rules, bans, and commissions built on fear can be applied to any group that dissents with a leader. Instead of issuing bans and creating a special commission, we need to be creating more opportunities for dialogue.

The satirical news reporter character of Jonathan Pie, played by actor Tom Walker, had this to say on his post-election, Youtube tirade, “President Trump: How & Why…”

“All we have to do is engage in the debate, talk to people who think differently to you and persuade them of your argument. It’s so easy and the left have lost the art. Stop thinking that everyone who disagrees with you is evil, or racist, or sexist or stupid and talk to them, persuade them otherwise. Because if you don’t, I’ll tell you what you get, you get President Trump,” Walker said.

He added many voters felt they could only express themselves honestly at the polls. Perhaps they would not have fallen in line behind a leader like Trump, if Americans did more talking than name-calling, in an effort to address the issues facing our country.

Now that we’ve got him, the question is what will President Trump give to Americans and those he sees as dangerous to his vision of the United States.