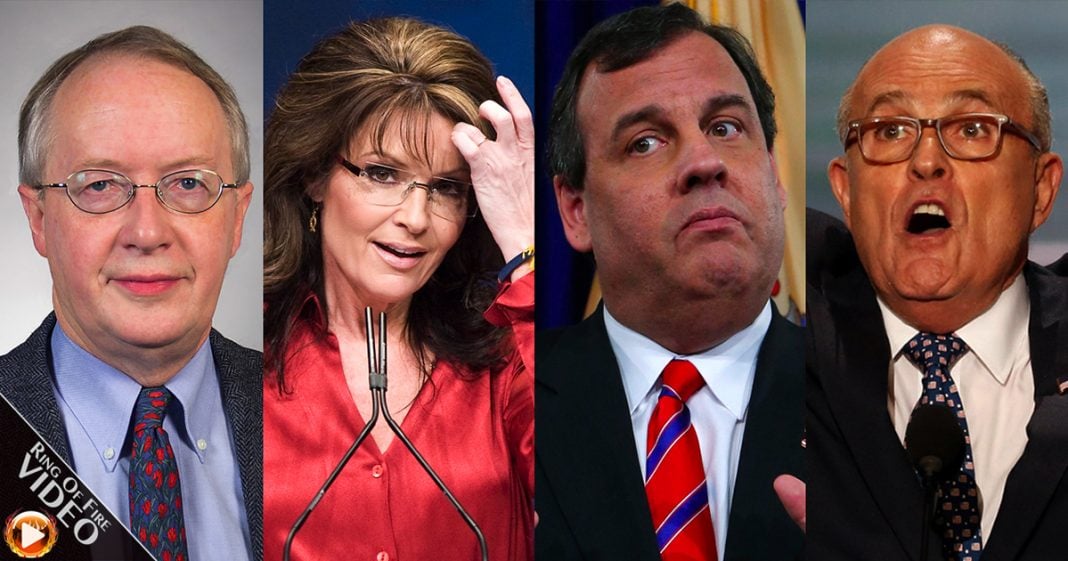 Donald Trump has already picked a climate change denier to head up his EPA transition team. He promised Sarah Palin a spot in his cabinet if he were to win. What other clowns will President Combover pack into his administration? The Ring of Fire’s Farron Cousins discusses this.

Well, Donald Trump has been the President-elect for about day and a half now and things are already looking pretty grim as far as the prospects of him appointing anybody that has a brain to serve in his administration. Case in point, Donald Trump has already picked Myron Ebell from the Competitive Enterprise Institute to head up the EPA transition team and most likely, he will end up being the actual head of the Environmental Protection Agency. For those of you who do not know, Myron Ebell is a very proud climate change denier. He is able to look at these reports of scientists, look at the scientific consensus, and say, “Nope.” That’s the kind of guy that Myron Ebell is, just really a brain dead Republican and fossil fuel industry zombie and he’s going to be in charge of the environment more than likely.

On top of that, Sarah Palin is being considered for a cabinet position. That news just came out this morning but if you remember back during the campaign, Donald Trump while speaking with Sarah Palin absolutely promised her a spot in the administration. Let’s remember that Sarah Palin, in addition to being a failed reality TV host, couldn’t get enough viewers to keep that show alive, she also never finished her term as a Alaska governor because she just couldn’t take it. Whether or not she would even be a lasting member of a Trump cabinet remains to be seen. So far, the woman seems to quit everything she ever does but just her in general, very scary. Again, somebody who has an IQ below room temperature probably shouldn’t be calling the shots for any policy in the United States.

Let’s go further down the list. Rudy Giuliani is absolutely going to be rewarded with some kind of position, possibly Attorney General. It just gets scarier from there. Chris Christie, if he’s not already in prison by then which I’m sure Donald Trump will most likely pardon him, probably coming into the administration. I could see Chris Christie probably serving as maybe Head of the Food and Drug Administration. I think it makes a little sense for him there but the bottom line is that we’re going to return to the Bush years. Admittedly, the Obama years were not much better because the industry insiders were still in Washington DC, Obama put them there, but at least they had somewhat of a brain.

This Donald Trump administration is going to be, and I meant this quite literally, one of the dumbest administrations we have ever had. Sarah Palin, Rudy Giuliani, Myron Ebell, Trump himself. Not smart human beings and that is terrifying because they will make policy, make decisions that affect our lives every single day and especially with regards to climate change. Let me put it to you this way. South Florida, Miami right now is flooding and no, there hasn’t been any rain but there’s still flooding because that’s just the way that the tides are going now. When the high tides hit, they’re coming up into the streets. They’re calling this a king tide and just a weather anomaly but this is the new normal and it’s going to be the new normal for all coastal cities under a Donald Trump administration that doesn’t even think climate change exists. That’s the America that we’re looking at here. Dumber, wetter, and just all around much, much worse than we have been for the last eight years.