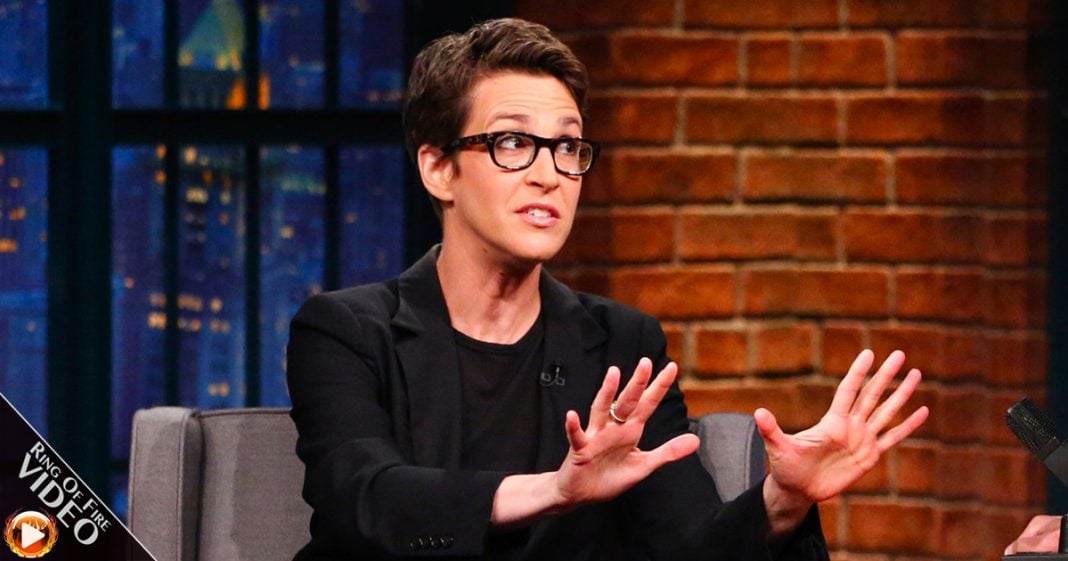 MSNBC’s Rachel Maddow said that third party voters not only “don’t care who becomes president,” but that they cost Hillary Clinton the White House. But the numbers simply don’t add up, and Maddow is angry at the wrong group of people. The Ring of Fire’s Farron Cousins discusses this.

If you were watching the election night returns on MSNBC, you probably saw that Rachel Maddow was having a bit of a hard time accepting the fact that Hillary Clinton did not become the next president. In fact, she said that if it hadn’t been for those third party voters, man, Hillary Clinton absolutely would’ve clinched it. She went as far as to say that third party voters clearly don’t care who the next president of the United States is. Now, before I get into the next part, let me just go ahead and say back during the Air America days when Ring of Fire was on Air America and Rachel Maddow was on Air America, we loved Rachel. She is one of the friendliest, and smartest, and nicest people you would ever meet. She is a good person, a very good person, a very smart person.

I have to say that because in her analysis of what happened on Election Day, she is 100% wrong, not only in her opinion, but in her facts, because when you look at the third party vote, specifically the Jill Stein voters, they would not have given Hillary Clinton the election even if every single person that voted for Jill Stein voted for Hillary instead. Hillary still wouldn’t have won. She would’ve added a couple more states to her total, but she would not have won the electoral vote. In Maddow’s analysis she even says if she had all of the Jill Stein voters and half of the Gary Johnson voters, well stop right there. Hillary Clinton, a Democrat, any Democrat, would not get half of the Libertarian vote. That’s not what Libertarians are. Libertarians are conservatives. I don’t even know why Rachel would bring that up.

The Democratic Party I should say did not lose voters to the Libertarian Party. I’m sure maybe you could find one, two, three examples throughout this country, but we did not lose droves of voters to the Libertarians. The people who voted for Gary Johnson were mostly disaffected Republicans who didn’t want to vote for Donald Trump. They were not going to come over to the Democratic side no matter what, so you can’t bring that into the equation. That’s like saying, “Well, if everybody who voted for Trump voted for Hillary instead, she probably would’ve won.” Yes, she would’ve won. If everybody in the country for Hillary, she would’ve won. Yes. When you use arguments like that, you can’t refute them, but you can’t pretend like everybody wanted to vote for Hillary Clinton, and you can’t tell people who voted for a third party that they don’t care. In fact, those are the more courageous people. They care so much that they were willing to risk it. I know that’s kind of maybe a bad analysis. Maybe people don’t want to hear that, but that’s how I feel about it.

People who voted for Jill Stein did not waste their vote. People who voted for Gary Johnson did because Gary Johnson and Libertarianism is stupid. Sorry, but it is. The Green Party stood for some great things. Now, I didn’t agree with all of them. Personally didn’t quite like Jill Stein as the candidate there. They could’ve done much better. After all, Jill Stein has already lost one election. I don’t know why they would even put her back up, but those people did not throw away their votes. Anybody who voted really honestly didn’t throw away a vote. People went to the polls and they spoke their minds. They did what they felt was right. You can’t be mad at people for voting, Rachel. I know you work for corporate media, but you’re smarter than that. You’re better than that, at least you used to be. I mean, that’s so sad to see what’s happened to you because of the influence that the corporate puppet masters at MSNBC have over you. I had higher hopes for you when you went to MSNBC. I thought you were going to change them, not the other way around.