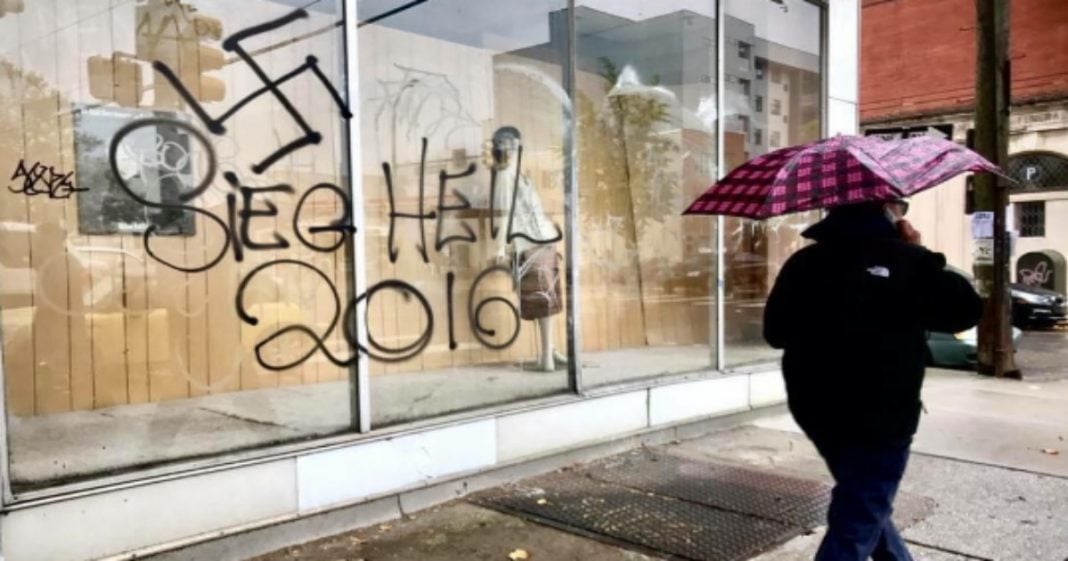 Now that our once great country has legitimized Donald Trump by electing him as president of the United States, those supporters who previously lived in the shadows with their white supremacy and racial hatred have now stepped out into the light.

In America today, it is no longer unacceptable to use racial slurs, to encourage discrimination, or to implement racist policies that favor White Americans at the expense of all others.

It is not longer such a big deal to sexually assault women – they probably deserved it anyway, right? It’s not a problem if our children disrespect others or shout about rapist Mexicans – after all, we just elected a man who does it daily.

So what does white, racist America do with its newfound freedom? Everything terrible.

A building in Philadelphia was vandalized with Anti-semitic graffiti on Wednesday morning – just as America woke up to the heartbreaking news of a Trump presidency, already his supporters were out in full force. The vandal wrote Trump’s name, substituting a swastika for the T in Trump’s name. Alongside it was scrawled, “Seig Heil” – a popular Nazi salute.

The use of the Nazi messages on this day is especially telling considering that today is also the 78th anniversary of Kristallnacht, one of the most significant dates in the Nazi’s genocide perpetrated against Jews and other persecuted groups in Germany and across Europe.

Luckily, detectives have already responded to the graffiti after it was reported to them this morning. Likely, nothing will be done and the most damage will occur when Nazi-sympathizers see the vandalism and feel heartened.

We will see more of this. We will see more than just spray-painted walls. As Trump’s rise to power continues, people will lose their lives, their freedom, their sense of security, and more.

This is Trump’s America.