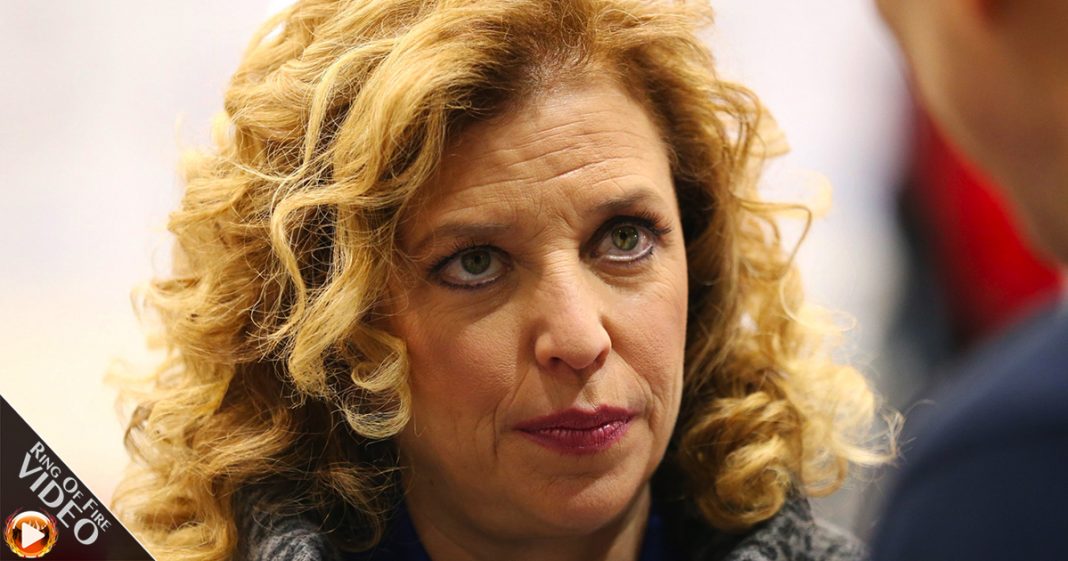 The Democrats put up a terribly flawed candidate instead of a true Progressive, and they were destroyed in the general election. There’s plenty of blame to go around, but Debbie Wasserman Schultz deserves most of it. The Ring of Fire’s Farron Cousins discusses this.

Well, now that everybody’s kind of settled down with the election results, a lot of people very unhappy obviously, but now the best part has started, the blame game. You have establishment Democrats right now trying to blame people like David Sirota, or The Young Turks, or even us here at Ring of Fire, because we dared to report the truth about Hillary Clinton, and say, “You know what? She’s got problems. We need to think about these,” so the establishment wants to blame the people who were critical of Hillary Clinton. They want to blame the Bernie Bros. They want to blame anybody but themselves, so you know what? Let’s join in. Let’s play the blame game, and I’m going to start placing the lion’s share of the blame for the Democrats’ losses this year on Debbie Wasserman Schultz.

From the beginning, she helped to game the system. I won’t say rig. She gamed the system. She gamed the party in favor of Hillary Clinton, because her and Clinton are good, close friends. Wasserman Schultz knew she was going to get a spot in that Hillary Clinton administration cabinet somewhere. How’d that turn out for you by the way, Debbie? Debbie didn’t want Bernie Sanders to be the nominee. The establishment didn’t want Bernie Sanders to be the nominee. American public unfortunately voted for Hillary Clinton in the primaries, so that’s who we got stuck with, so the voters take a good share of this.

You know who else does? I almost hate to say this, because a lot of these people are good friends. We’ve had them on Ring of Fire the TV show, the radio show countless times over the years, but some of the Democratic journalists, pundits. You guys just pushed Hillary Clinton so hard, ignored all of her flaws, wrote them off, acted like they didn’t existed, just because you desperately wanted to get that first woman in the White House. If you wanted that, you should’ve put up Elizabeth Warren. If Elizabeth Warren had been the nominee, we’d be talking about very different things right now. I don’t ever want to hear the name Hillary Clinton again. She ran for the Democratic nomination in 2008, and the public rejected her, so here eight years later the pundits, the establishment, the voters said, “All right, well time for the second choice. Let’s not give anybody else a chance. Let’s game the system. Let’s confuse the people. Let’s ignore her problems in order to put up this person that the voters already rejected.” Again, how’d that turn out for us, folks?

You know, it’s okay to be pissed off right now. It’s okay to be upset. I’m telling you, I am mad at the Democratic establishment. I am mad at those pundits, those journalists who just pushed Hillary Clinton so damn hard and didn’t care about the consequences, didn’t care about her flaws, didn’t even take that into consideration. You’re to blame. You can’t even blame the people who abandoned the Democratic Party to vote for Jill Stein, because even if Jill Stein had gotten zero votes, Hillary Clinton still would’ve lost. Those Jill not Hill people had no impact on Hillary Clinton’s loss, so you cannot blame them. Gary Johnson took votes away from Donald Trump, so had he not run, Trump would’ve won by bigger margins. The only people to blame are the Democrats, and that’s probably one of the saddest things that I’ve ever had to say.