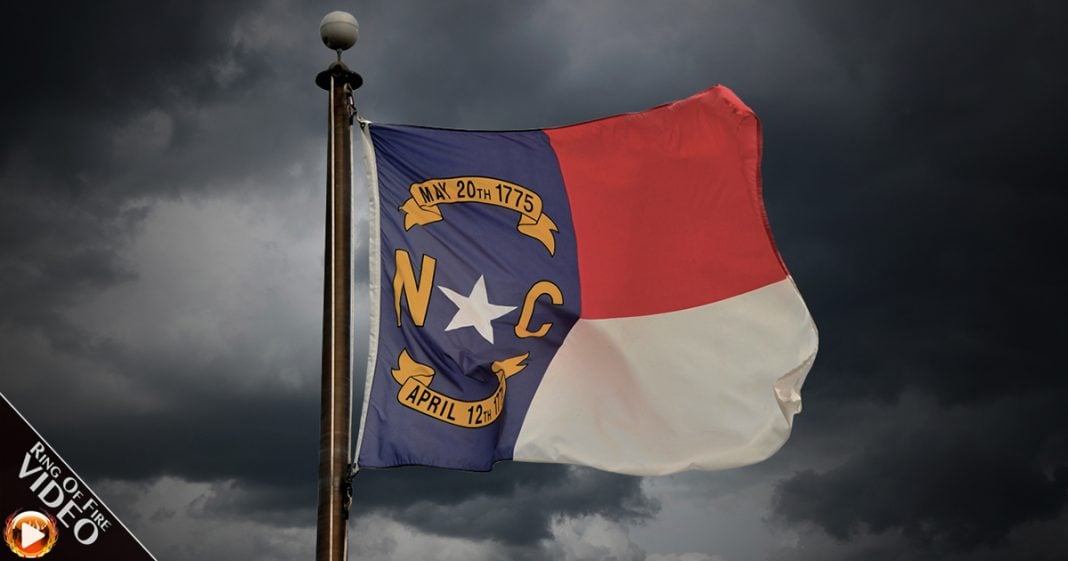 Republicans in North Carolina have done everything possible to prevent black voters from reaching the polls this year, and their recent “victory” letter shows just how racist they really are. The Ring of Fire’s Farron Cousins discusses this.

Here we are, it’s election day finally, everybody’s been anxiously waiting for this day for 18 months. One of the biggest stories is actually what happened yesterday in the state of North Carolina. It turns out that the GOP officials running North Carolina’s election were so thrilled about the fact that African American voter turnout has dropped this year, that they decided to send out a little press release among themselves to just talk about how great things were going in the state for white people.

The press release specifically said, “North Carolina Obama Coalition crumbling, African American turn out down by 6% while Caucasian turn out is up 4.2%.” For anyone keeping track, that means that the gap between the two is now even greater by 10%. Now, I don’t know if it’s just mental fatigue from talking about this election for the last 18 months. Maybe it’s all of the cold medicine I have kicking around in my system right now, but my initial reaction to seeing this story is to tell the GOP officials in the state of North Carolina, go to hell. I mean that. I so mean that literally. Go to hell. You people are the biggest piles of excrement that I’ve seen since the last time my dog was sick. This is disgusting behavior from elected officials. People who are in a position where you’re suppose to be helping everyone. You’re suppose to make sure that as many people get out to vote as can possibly vote. Here you are celebrating the fact that you’re going to win the state of North Carolina essentially because you’ve suppressed the black vote in your state.

Just last month, October, the NAACP had to file a lawsuit against election officials in North Carolina for purging thousands of black people illegally from the voting roles. This is disgusting. There are not enough words to say how truly despicable these characters up in North Carolina truly are. I wish I could be a little more colorful about the language I use to describe them because that’s how angry I am about this. This is America 2016, and these GOP officials in the state of North Carolina want to take us back to America in 1816. That’s what they want. Don’t let them kid you. They don’t look at black people as human beings. The only people that actually register as people to them are white people. I take that back. Straight white people, because we all know how North Carolina feels about homosexuals, trans-gendered people, and the like.

Yeah, straight white people, typically white men preferably for them. You’re absolutely a human being in the state of North Carolina. Anyone else, you may want to consider packing your stuff and going to a different stated.