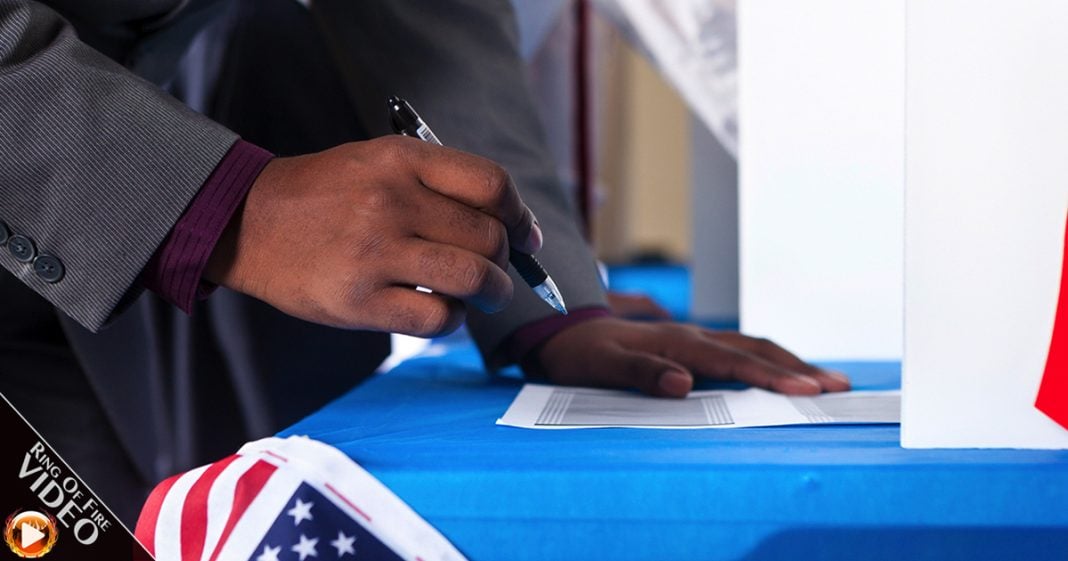 The Republican Party has never been shy about their plot to prevent people of color from voting, but a new string of emails reveals that they actively lobbied North Carolina precincts to limit early voting in order to prevent black people from voting. The Ring of Fire’s Farron Cousins discusses this.

According to a new investigation by the Reuters News Agency, e-mails have been uncovered from GOP officials in North Carolina to precincts in the state of North Carolina urging them, begging them, lobbying them to shorten poll hours and to open fewer polling places, with the expressed intent of keeping people of color from making it to the polls this year. Now these e-mails don’t tell us anything that we didn’t really already know, but what they do is they put it all right there in black and white to be verified that the Republican Party of the United States does not want black people to vote.

There is no other way to slice this here. They clearly, at least in the state of North Carolina, were trying to limit the number of precincts, of polling places open, and the amount of time they were given for early voting only to keep black Democrats from being able to vote this year, because they know, according to statistics, polling places in North Carolina that only had one polling place open during early voting times saw a twenty percent decrease in overall voter turnout. That difference this year with such a close race in so many states, especially North Carolina, could easily be the difference between a Democrat victory and a Republican victory. The Republican Party knew this, and that’s why they went ahead trying to shut down as many of these places as possible.

In fact, one precinct worker who tried to fight back said that he was vilified, treated as a villain because he wanted to open up more polling places in his area. He wanted to extend early voting hours to make sure that everybody in the state of North Carolina got the opportunity to express their constitutional rights to participate in democracy, and they acted like he was the asshole in this scenario. That’s what the Republican Party wants to do. They don’t want to extend the right to vote to everybody in this country. They want to have as few people as possible show up at the polls each time there’s an election, because low voter turnout always benefits the Republicans.

Now we’ve only got a couple of days here until the actual election, and, unfortunately, there’s not enough time left to fix this situation in North Carolina or to fix any of the voting problems that we’ve seen erupt in any state in the United States here. What we can do, because we do still have time for this, is to vote them out. If you live in a state where Republicans have limited voting hours or taken away polling places, reducing the total number of them in your state, vote them out across the board, down the line, no Republicans. If a Republican is running unopposed, write in someone else. Let them read off those tallies on your local news at night and say, “Well, this guy was running unopposed, only got sixty percent of the vote. Send that message. That’s the best thing you can do.

They may have taken away some of the polling places, they may have limited the hours, but they cannot take away your power that you have when you cast a vote.