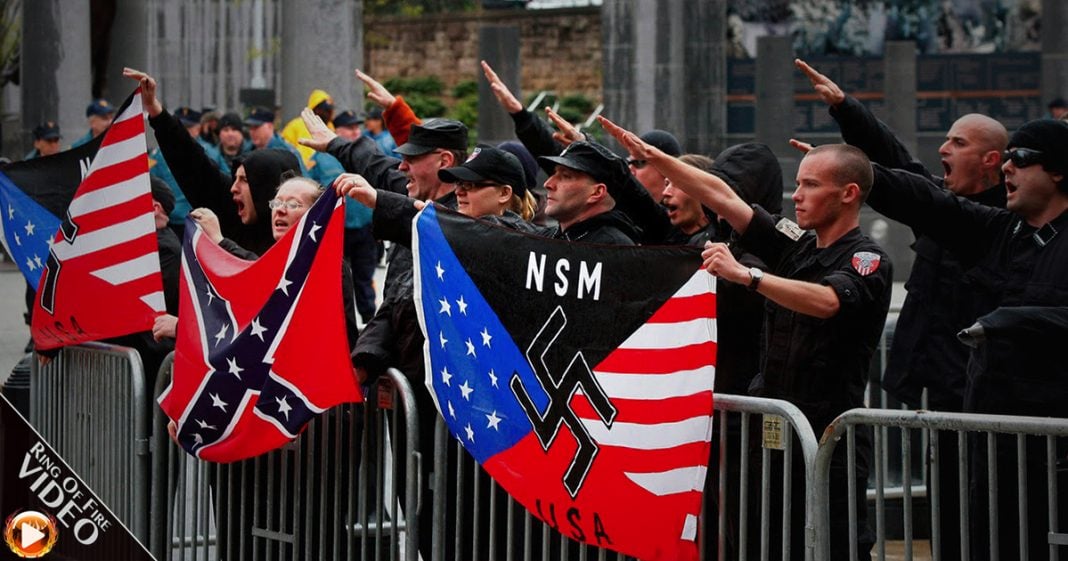 Donald Trump looks like he’s heading for a sound defeat on November 8th, but the White Nationalists that he has inspired are preparing for a revolution that will outlive Donald. If these threats aren’t taken seriously, we will have a very dark four years ahead of us. The Ring of Fire’s Farron Cousins discusses this.

One of the best things that the progressive alternative media has done during this election is to continuously hammer on the fact that Donald Trump has energized the white supremacist underlings in the United States. Every day, there seems to be a new story discussing this fact, and that’s a great thing because this is a very serious issue that everyone in this country is going to have to address. See what happens next Tuesday doesn’t necessarily matter for the white supremacist movement. Donald Trump is very likely to lose, but this group, this white supremacists, the KKK, they’ve already won. They had a national figure at the head of the Republican Party who legitimized their beliefs, their actions, and everything that they believe in.

These people now feel like they are a part of the mainstream because Donald Trump and the Republican Party helped to make this kind of hate mainstream. That’s what so scary about it. We have Donald Trump’s white supremacist supporters right now according to a online poll on Stormfront, the White Nationalist website with a majority saying they will not accept the results of this election if Donald Trump loses. Some commentators have even said, “You know what, we’ll take this country back. If we can’t do it through the democratic process, we’ll do it by force.”

They are threatening violence against the United States, against United States citizens. They want to overthrow the government. That is what they’re saying on these websites. Now, whether or not any of these comes to fruition, is … We won’t know until we see it, but I sincerely hope that the FBI and the Department of Homeland Security are looking at these threats and taking them very seriously. This is homegrown terrorism in the United States perpetrated by white men.

Something has to be done about this. The violence that they have threatened at the polls showing up armed to the teeth ready to take on anybody, or just intimidate black people, that’s not acceptable, that is criminal behavior in the United States. Threatening to overthrow the government is treason, sedition. That’s what the Bundy folks did up in Oregon, and they got off. The others are still in jail because they’re waiting another trial for what they did back in 2014, but they are energized.

The White Nationalist Movement is energized not only by Trump, but by what happened in Oregon. They feel like they have power, and they feel like they can exert that power without any consequences because to be perfectly honest with you, in the United States, if you are a white guy, there are no consequences.