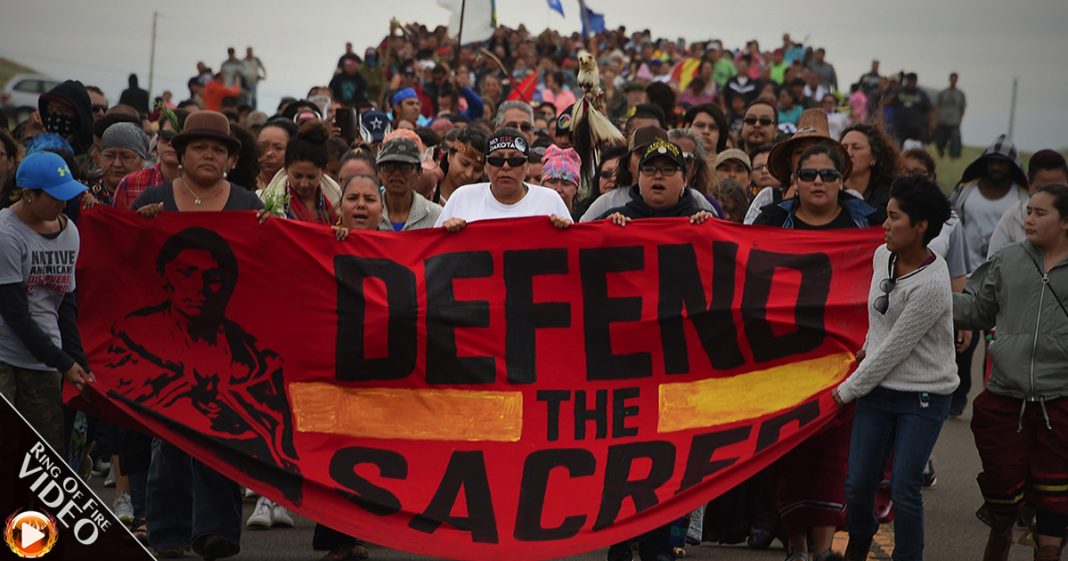 Protestors are being shot by rubber bullets while protesting the construction of the Dakota Access Pipeline, yet the armed militia that occupied a federal wildlife preserve got off free. But the bigger question that’s been lost in the shuffle is why we even need yet another oil/gas pipeline running through the United States. The Ring of Fire’s Farron Cousins discusses this.

As the latest reports are coming in about the people protesting the construction of the Dakota access pipeline, we are finding out that police are shooting them with rubber bullets. There is one instance where a woman had to go the hospital to actually get the rubber bullet removed from her body, because it did penetrate and go into her. They are shooting their horses with these rubber bullets, and overall just greeting these protesters with a massive show of strength saying that, “We don’t care what you are protesting. We don’t care that you are exercising your First Amendment Rights. We are going to take you out by force.”

That’s one part of the story. Here is the bigger part that I think is being missed by almost everyone here. Why do we even need this pipeline? Who would benefit from the construction of this pipeline? I know a lot of people are going to say, “Well, obviously the government,” yes, obviously the company, the Federal Government that gets money, the politicians who get money from the company, yeah, that’s obvious.

Is there any benefit to the American public that comes from the construction of this pipeline? The answer is no. We have an abundance of oil in the United States, so much so, that we lifted the oil export ban that had been it place for 40 years since the oil embargo of the 1970’s. We have got too much of it. We don’t know what to do with it. The only people profiting off this, are the companies involved in the construction, the refining and the drilling. Those are the only people who benefit. The planet dies, the environment dies, people are getting shot by police officers, police officers are getting shot at. Is that worth it? For the profits of this company? No. And, are we that brain dead as a society to think that we just need more oil, at a time when we know the planet is literally dying, and we’re going to just, “Okay, let’s build another pipeline.”

220 pipeline spills so far this year, “Let’s build another pipeline.” Are we that dumb as a country? Unfortunately, the signs point to, yes, we are. There is no need for this pipeline to be constructed. For President Obama to come out and say, “Well, you know what, maybe we’ll just kind of consider a new route,” That is total b.s. We don’t need to reroute it, we need to stop it. We don’t need it. That’s the point that everybody is missing here, with the exception, obviously of the protesters who are out there. They understand that. They understand there is absolutely no need for this pipeline. It’s not only about the fact that it could poison water for millions of people, or that it is going to destroy sacred Native American burial grounds.