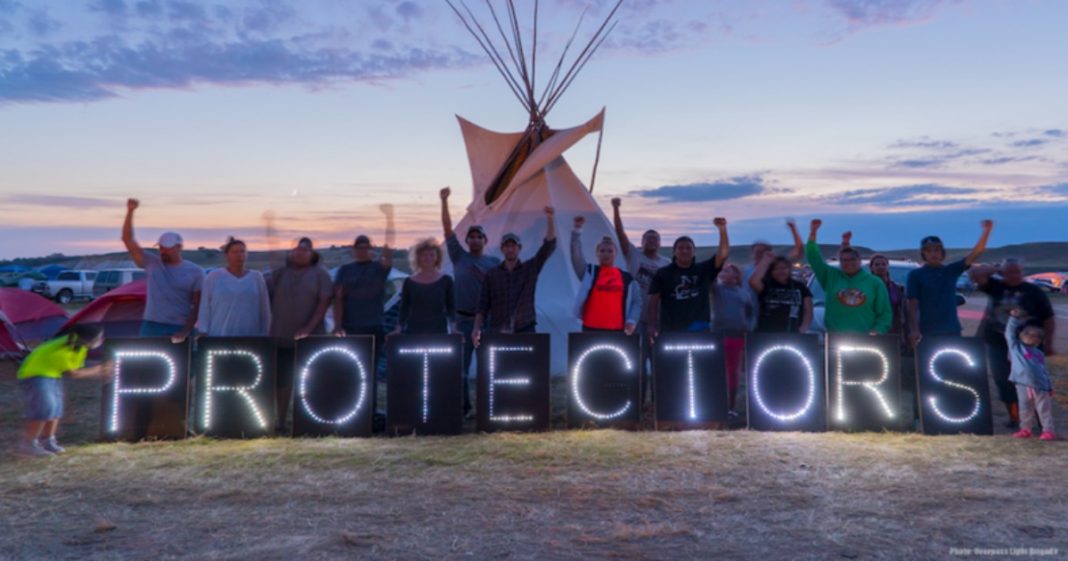 There has been a great deal in the news recently about the Dakota Access Pipeline protests, also known by the hashtag #NoDAPL – including the use of pepper spray and guard dogs against the protesters and wholesale arrests that included journalists and Native American activists and leaders – a number of whom report being placed in dog kennels.

As of October 31st, nearly 270 people had been arrested in connection with the pipeline protests. However, the big story that has largely flown under the radar is the $2.5 million bailout of those protesters, reportedly thanks to an unknown benefactor.

The story was first reported by the family of a Caddo Nation leader by the name of Tamara Francis-Fourkiller. Chairperson of the tribe, Francis-Fourkiller is an expert on Native American sacred burial grounds (one of the underlying issues of the NoDAPL protests). The kicker is that she was not directly involved in the protests, and should never have been arrested to begin with. Ms. Francis-Fourkiller was one of several tribal leaders who had come to visit the Standing Rock Band of Sioux in order to facilitate negotiations between the First Nation protesters and the DAPL construction workers.

She told reporters, “Remains were being desecrated in this pipeline, so they had asked a bunch of people to come up there, so there’s a big conference.”

Francis-Fourkiller and her sister Loretta took a tour of the protesters’ camps – and that’s when they wound up being detained by law enforcement. While in custody, Loretta had no access to the medication she takes. That was on Thursday.

On Saturday afternoon, members of the Francis-Fourkiller family reported that an anonymous donor had paid $2.5 million for the release of all detainees. The story was published on a blog called the “White Wolf Pack,” and  picked up by several other news sites, including KOTV in the Francis-Fourkillers’ home state of Oklahoma.

However, since then, the nonprofit organization Red Owl Legal Collective (ROLC), part of the National Lawyers Guild, denies that any such donation was made. In a statement dated October 31st,  the ROLC said that “[no] such contribution was received or used for bail money, vehicle forfeiture money, or in any manner for the defense of those arrested.” The organization further expressed concern that  “this false assertion will deter people from contributing to the organizations who have been involved in posting bail for and defending the water protectors.”

There have been donations pouring in. On October 24th, the Cherokee Nation of Oklahoma gave a $10,000 donation to the Standing Rock Sioux as well as several truckloads of firewood in support of the ongoing protest. The ROLC also issued a statement thanking “the Legal Defense Fund of the Sacred Stone Camps and their donors for their generous financial support.”

As for the “anonymous donor” who reportedly came forward to post bail for the detained protesters, there is at present no reliable evidence that any such donor exists or that s/he paid the bonds.

Those who want to add their monetary support to the #NoDAPL protesters can do so at the organization’s Facebook page.