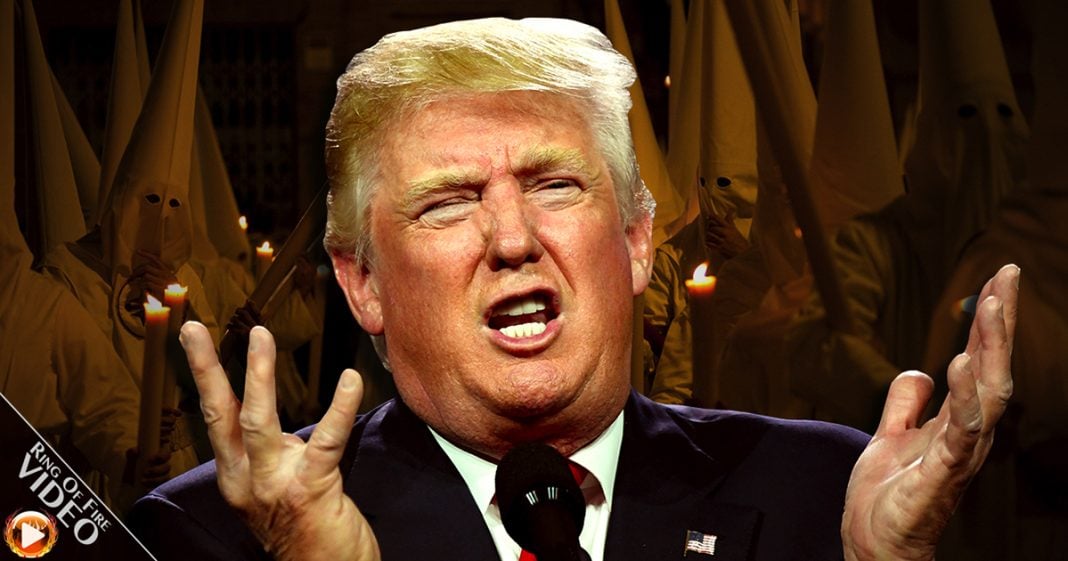 Donald Trump has solidified his connection to White Nationalists this week with an endorsement from the KKK. These white nationalist groups have also vowed to serve as “election integrity enforcers” on election day, prompting even more fears of violence at the polls. The Ring of Fire’s Farron Cousins discusses this.

Great news for Donald Trump this week. With one week left to go in the election he gets the biggest endorsement of his campaign, and that endorsement came from a faction of the Ku Klux Klan. That’s right, in their quarterly newspaper part of the Ku Klux Klan officially came out and said, “We support Donald Trump for president because we believe he’s going to make America great again.” When they say make America great again, the paper clarifies that they’re talking about the founding fathers. Not what they did, but who they were. Which was white, according to them, Christian men. Of course, anybody who knows history understands that not all these men were Christian, and most of them did not subscribe to any kind of single deity type religion, or any religion at all to be a little more clear.

Yes, the KKK has officially endorsed Donald Trump, but it gets even better. According to reports white nationalist groups are threatening violence on election day. They’re threatening to go out under cover, according to these groups, to monitor and surveil voters in what they consider to be African American communities. Another one of their plans for election day, according to Politico here, is they’re planning on giving out alcohol and marijuana in the “ghettos” to prevent people from being able to make it to the polls next Tuesday. Not only is this one of the dumbest ideas I’ve ever heard, it clearly is one of the most overtly racist based on nothing more than stereotype plans that I’ve ever [can see 00:01:43]. These people are cartoon characters, basically. They are caricatures of themselves.

This is sickening that Donald Trump is not out there right now tweeting about how horrible these idiots are. Instead, he’s talking about crooked Hillary and deleting emails and blah, blah, blah, who gives a crap. We have a real problem, and that is Donald Trump has energized and mobilized the white supremacist movement in the United States. He’s legitimized it. These people think that they have real power. They think that they have a guy running for president that really gets them, and they do. Donald Trump is right there with them with what he believes. Anyone who thinks otherwise is kidding themselves. Now, an endorsement from the KKK and promises from white nationalists to wreak havoc on election day are not something that we should take lightly.

As far as I can remember the KKK did not openly endorse Mitt Romney, they did not openly endorse John McCain. They are doing that with Donald Trump. That should scare the hell out of anyone even on the fence about whether or not to vote for Donald Trump. To be honest, it also spells out the differences between Donald Trump and Hillary Clinton. Don’t get me wrong, they are both bad picks for president. When the KKK endorses one of them and not the other, it’s kind of a sign that we probably need to go with the other for fear of what could happen if Donald Trump wins.