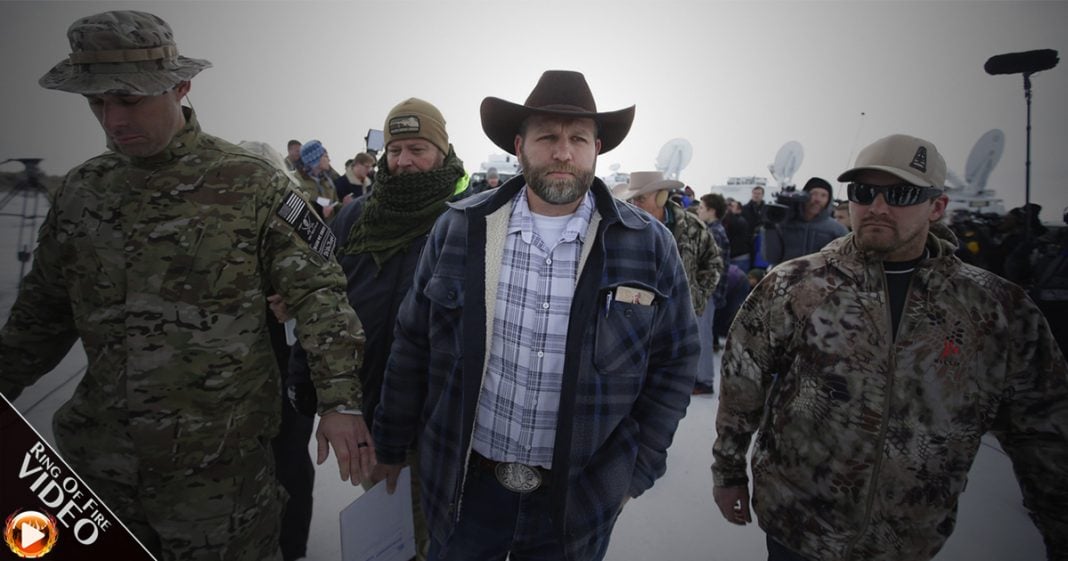 The Bundy family can do no wrong in the eyes of the law, even when they are pointing loaded assault weapons at law enforcement officials and causing millions in damages to federal property. It pays to white in America today, and that’s sickening. The Ring of Fire’s Farron Cousins discusses this.

Great news, white people. It turns out that you can point loaded weapons at federal law enforcement officials. You can occupy federal land for over a month, cause 6 million dollars worth of damages, and not go to jail. Just look at what’s happened now to the Bundy militia up in Oregon, acquitted of all charges except one minor charge against Ryan Bundy, but they were all essentially, the 6 people who were put on trial, free to go. This is disgusting. Had the people occupying that refuge earlier this year been a color other than white, not only would they have probably been convicted, but it probably wouldn’t have even gone that far because they’d all be dead if they were black or if they were Hispanic or if they were Muslim.

The police would not have even given them the opportunity to try to surrender because they would have fire bombed the hell out of the place, but oh no, the Bundy’s have proven time and time again, you’re a white guy, you can get away with anything. These are white terrorists. They are terrorists. What they did was terrorism, and they can cling to the Constitution all they want, but there is no other way to define what Bundy and his pals did in Oregon and what they did in the Southwest a few years back. That’s terrorism, folks, and they’re getting away with it. It’s going to inspire more acts of terrorism.

Many times this year, I’ve spoken with David Neiwert. He’s with the Southern Poverty Law Center Crooks and Liars, and that is exactly what he predicted would happen if they were not held accountable because he predicted that it would only escalate after the first Bundy standoff, and he was absolutely right. He was right again, and he’ll continue to be right because these people continue to get away with it. Meanwhile, all you have to do is be black to get shot by police officers in the United States. Look at what’s happening with the Dakota Axis Pipeline Protest. Journalists are being put in prison facing 45 years for reporting on something, violating the First Amendment. That’s what we’re seeing, but that’s okay. Nobody cares about that.

I guess it’s true what they say. The pen is mightier than the sword because law enforcement in the United States is more afraid of journalists than they are of white terrorists taking over a federal building for over a month. This is disgusting, folks, and the worse part is it’s going to get worse. We will see these Bundy boys even more empowered. The whole white nationalist movement is going to be empowered by this, and we’re all going to be the victims until someone stands up and upholds the law and puts these people in prison for the rest of their lives, but, no, not in the United States. Hey, just in time, too. The Bundy boys make it out of prison with enough time to go cast their votes for Donald Trump.