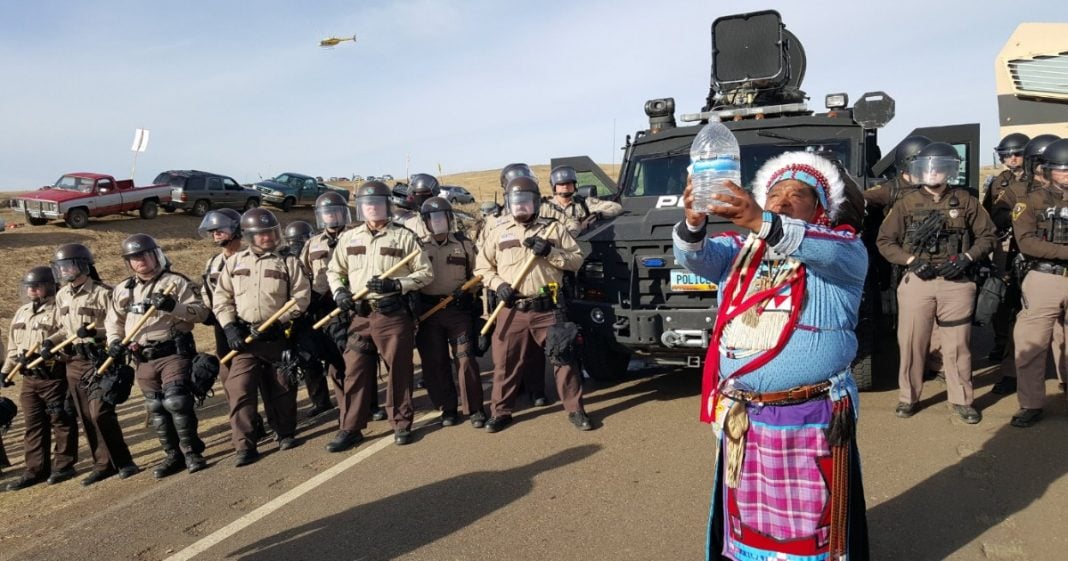 The law enforcement, alienated entirely from the community they were invading, used mace, tasers, rubber bullets, high frequency sound bursts, and brute strength to force the water protectors into submission.

News of the rising conflict spread quickly online, though the cell and internet signal was weak on the Dakota prairie. Activists like Atsa E’sha Hoferer shared their experiences and attempted to document each moment of the invasion.

Hoferer could be heard repeatedly telling viewers to spread the message of his people’s persecution to anyone who would listen. He called on Bernie Sanders, Hillary Clinton, President Obama and others to pay attention to their plight and call for a halt of the attack and of the pipeline.

Hoferer also expressed concern at what might happen to his fellow protesters and himself. Having been arrested just two weeks prior while demonstrating, Hoferer said that he felt police were provoking the protesters into acting in a way that would justify their arrest.

Though police initially stated again and again that they did not want to hurt or arrest anyone, that is exactly what happened. Many protesters were arrested by police, though it is unclear how many.

This is just the most recent of a long string of arrests of peaceful protesters involved in the NoDAPL movement. Weeks ago, 27 protesters were arrested on Indigenous People’s day, along with actress and activist Shailene Woodley. Journalist Amy Goodman was also arrested for trespassing while she was covering the protest. Her coverage was the first to make its way to corporate media, a significant moment for the movement.

Though many online saw coverage of the police’s advancement upon the peaceful camp, it still did not receive the coverage it deserved.

It is especially telling that on the very same day police attacked, bruised, and scarred Native water protectors, a jury of 12 cleared the Bundy brothers and their fellow dissidents of all charges involved with their violent, armed occupation of a federal building.

Clearly in America, if you are a white man holding a gun, you’re a patriot, while an unarmed protester protecting water is a violent threat which must be submitted.