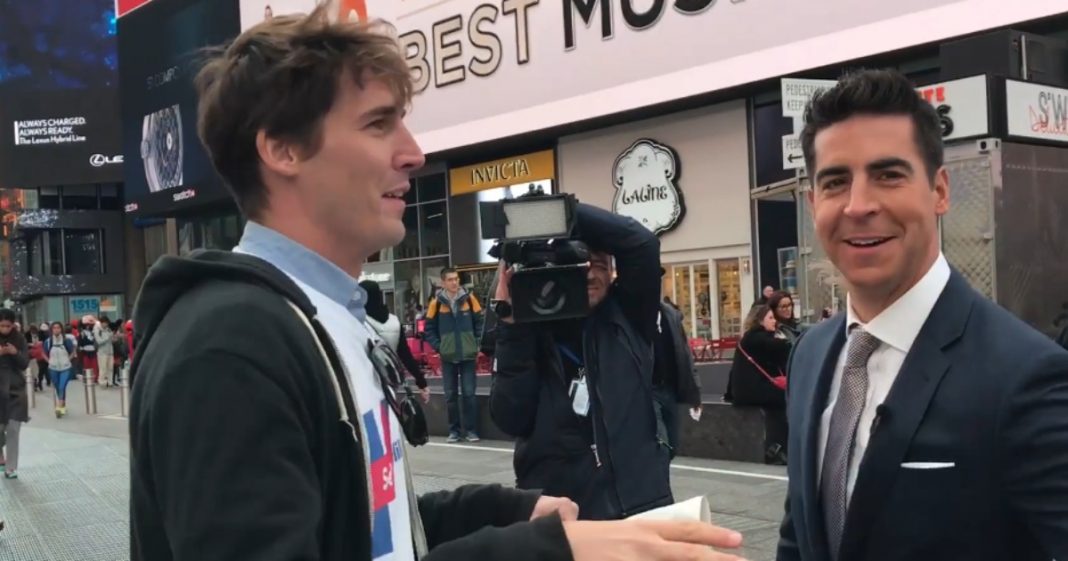 Bill O’Reilly’s comically challenged underling Jesse Watters got a taste of his own medicine this week when a comedian crashed his “Watters World” segment to suggest some fun new topics for the racist to delve into.

Jason Selvig, one of the two members of the comedy duo The Good Liars, went to the streets of New York City to chat with Watters and maybe even get a promotion for his new film, “UNDECIDED: The Movie.”

After giving the pseudo-pundit an enthusiastic hug, Selvig began giving his pitches.

“Alright, how bout this? Just a bunch of black people eating chicken. That’s funny! Or what about Mexicans eating tacos, and making fun of the jobs they have?”

Watters didn’t have much of a response besides wearing that usual pasted-on grin he is infamous for. But it was nice seeing him on the other side of uncomfortable for once.

“What about gay people? Oh, you already did that one! Oh, like just call a Muslims terrorists? Um, but you guys already do that.”

At the end, Selvig made it clear what his true motivation was when he told Watters he would leave him alone, if only he would endorse his new documentary. He didn’t get any endorsement, but he did get this sweet, sweet cringe.