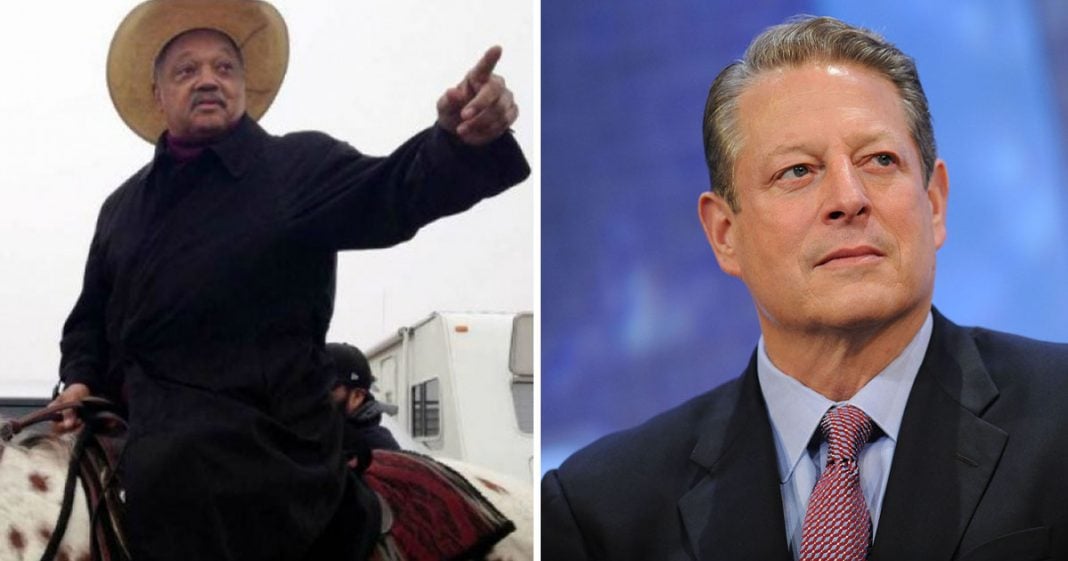 Former Vice President Al Gore and noted Reverend Jesse Jackson have both spoken out in support of the protest against the Dakota Access Pipeline this week, adding additional authority and attention to the cause.

The protesters at Standing Rock have been occupying the construction site for nearly a month now, despite attack dogs, mass arrests, and being mostly ignored by the rest of America.

Despite all of this, the group of Native Americans, activists, and supporters have continued their demonstrations, slowly raising awareness of the destructive and intrusive actions of the Dakota Access Pipeline.

Gore released a statement on the protests on Tuesday, saying,

“The non-violent resistance to the Dakota Access Pipeline is […] one of the frontline struggles that collectively mark a turning point in the decision by humanity to turn away from the destructive path we have been following and aim instead toward a clean energy future for all.”

Jackson visited the site of the protest on Wednesday where he addressed the protesters and pledged that they would, “pray together, protest together, and if necessary go to jail together.” The civil rights activist is no stranger to conflicts with law enforcement when it comes to protests over social justice issues, so his support is incredibly important.

“Native Americans who oppose the pipeline have a ‘moral claim to be heard’ and that their burial grounds ‘must be honored.'”

Before now, the protests had been widely ignored by the government types, gaining no mention from either presidential candidate. Weeks ago, Senator Bernie Sanders spoke about the pipeline, calling on the president to halt – and then end – the development of it.

Celebrities backing the NoDAPL efforts have been numerous. Many of the same vocal actors in the Sanders campaign were also willing to offer their support to the protests, including Susan Sarandon, Mark Ruffalo, Shailene Woodley, and more.

Woodley was even arrested for her involvement, along with Journalist Amy Goodman and documentary producer Deia Schlosberg.

The president had temporarily halted the development of the pipeline, but that order was eventually overturned by state courts. Now, the protesters are demanding that a halt be brought again so that a full cultural and environmental survey can be conducted. In these surveys, activists hope to find a reason to put a halt to the pipeline for good.