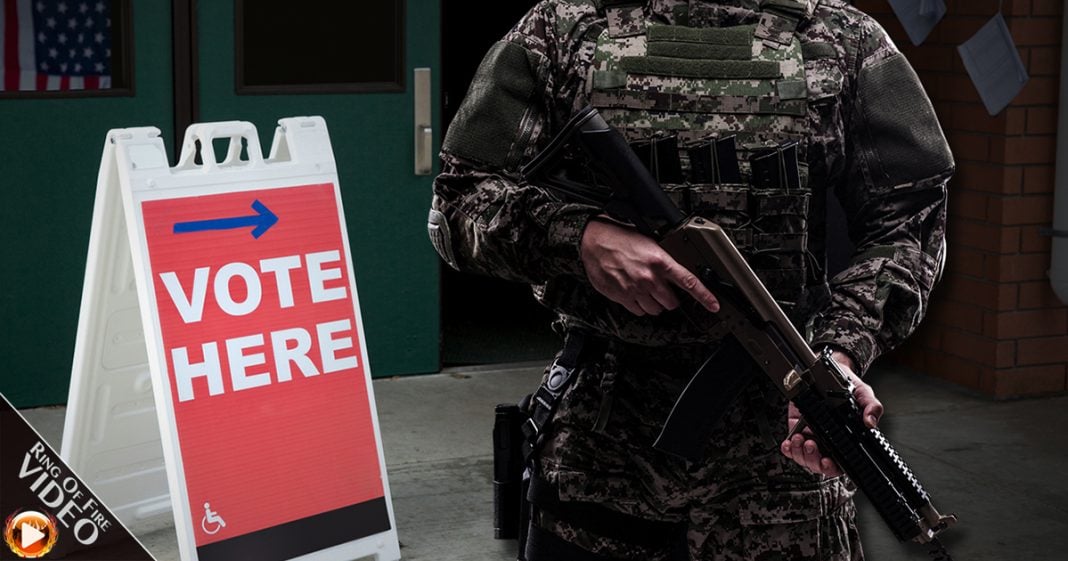 Donald Trump has been telling his supporters that this election will be rigged, and his supporters are taking that to mean that they need to get physical at the polls. The Ring of Fire’s Farron Cousins discusses this.

Now, two out of three Donald Trump supporters have already said that they do not believe that this will be a fair election. That in some way the Democrats are going to get out there, rig this to make sure that Donald Trump loses, and what happens after that? Nobody knows. Former Congressman Joe Walsh has gone as far as to say that on November 8, he plans to vote for Trump and on November 9, he’s going to grab his musket and he also tweeted out who’s with me on this?

A lot of times polling places are located within schools, colleges, universities, what have you. Many of those schools across the country preparing for this violence have decided to cancel school that day. That’s how serious this problem is. People don’t like to close schools. For many children, that’s the only food that they get to eat that day. But because Trump’s supporters are so unpredictable and because Donald Trump himself has been so vile with his rhetoric about claiming how rigged this election is going to be, we’re having to close schools.

Poll workers are now having to be trained on how to respond to some kind of conflict taking place from Donald Trump’s supporters. This is the stuff you read about happening in third world countries. Where people go into polling places and open fire. Or they send armed guards there to make sure that you vote the way they want to vote. Believe me, Donald Trump is still encouraging his supporters to show up and do everything possible to harass Democratic voters.

This isn’t a democracy anymore folks. This is a banana republic. And it’s all because of Donald Trump. The years that allowed Donald Trump to flourish. This is your modern day Republican party. It’s not something that anyone needs to be proud of.