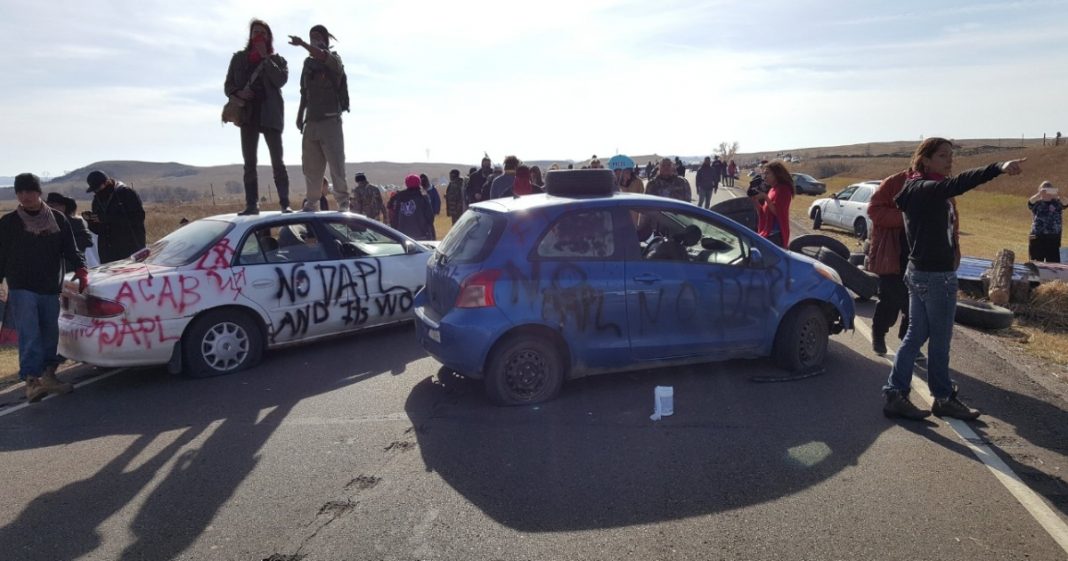 You probably aren’t hearing anything about it on CNN, MSNBC, or Fox News, but the ongoing NoDAPL protest is reaching a dangerous boiling point on Thursday as police and protesters enter into a volatile stand-off.

On Thursday afternoon at the site of the Dakota Access Pipeline protest, police arrived in militarized humvees and army tanks in order to try and disperse a road blockade made by protesters.

“Go to the south,” police said.

Reporter Wes Enzinna shared a quote from an unnamed local protester who declared, “It’s a protest, not a fucking war,” while others chanted “hands up, don’t shoot.”

Throughout the conflict, protesters have remained calm, asking that police do the same.

Police have informed the protesters that if they do not take down their camp and move to the main camp southward, they will be arrested. The police have already arrested dozens of protesters in the last several weeks.

“We do not want to arrest you,” police told the protesters, but told them that they must remove themselves from Highway 6.

Atsa E’sha Hoferer, A native protester who had traveled from Nevada to join the demonstration, was livestreaming the event when he asked non-native listeners how they would feel if the government wanted to build a pipeline through graveyards.

“They’re desecrating our sacred sites, our burial sites. . . because you want to have a gas that’s only a dollar? It’s a federal offense, as far as I can tell. Just because we don’t have a cross or a tombstone doesn’t mean our people aren’t there.”

“This is not a native thing. This is all of us. We are water protectors.”

According to Hoferer, he was one 27 many arrested along with activist Shailene Woodley on Indigenous People’s day.

According to Unicorn Riot, a grassroots media organization, police began placing barricades in the road and employed an LRAD sonic weapon which uses a high-frequency and repetitive alarm sound in order to confuse and disperse protesters.

Hundreds of police and military move in to evict the #OcetiSakowin (Sioux) from 1851 treaty land as #DAPL actively digs. #NoDAPL pic.twitter.com/7lxStTEozE

Both Native Americans and supporters have been assembled at various protest points for the last month, some wearing clothing or holding signs that declare, “We are here to protect. Water is life.” Protesters maintain that they are peaceful, even while they have been attacked by dogs and threatened by police in riot gear.

Celebrities including Reverend Jessie Jackson, Shailene Woodley, and Mark Ruffalo have visited the protest to show support. Others like Bernie Sanders and Al Gore have offered their support as well, calling on President Obama to force a halt on the protest.

With no major media coverage, it is unknown whether police will try and keep the conflict peaceful or if they will seek to cut the protest short via whatever means necessary. Meanwhile, protesters are set to stay as long as needed to end the pipeline, working to fortify their camps for a cold winter.

Signal is weak and media is rare, but you can follow the developments by watching Hoferer’s livestream on Facebook.