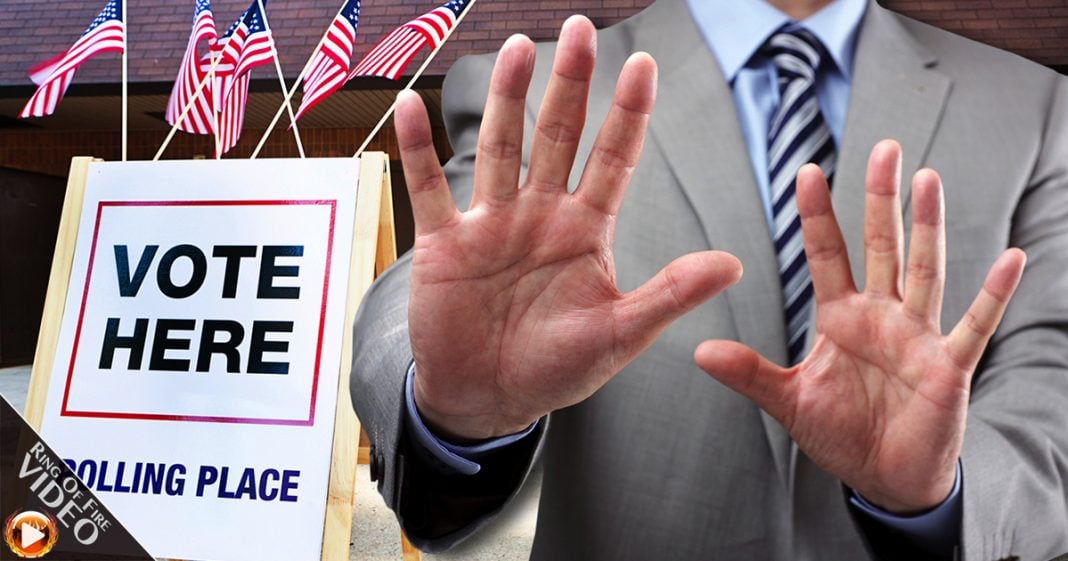 Donald Trump is absolutely right – this election is rigged. But it isn’t rigged to hurt Donald Trump. Instead, Republicans are doing everything possible to suppress the Democratic votes. The Ring of Fire’s Farron Cousins discusses this.

Donald Trump is out there right now telling all of his supporters that, “Look. This election is going to be rigged. I am not going to accept the results because this is a rigged election, so you need to go out there and fight.”

Well, Donald Trump is 100% right. This election is being rigged. It’s just not being rigged in the way that he thinks it is. This election, in states all over the country, is being rigged against Democratic voters, or people who might consider voting for Democrats. Earlier this week, Ari Berman at the Nation reported the fact that in Green Bay, Wisconsin, the director of voting, there, decided to not open a second early voting station near a college, because college kids tend to vote for Democrats over Republicans. The woman who made this decision was a Republican, and didn’t want to increase the Democratic turnout by allowing these kids to go vote for President, for the first time in many of their lives. Yeah, that’s rigging an election.

Look what’s happened in North Carolina. Heavily Democratic areas have been reduced to only one polling station when usually they have several. In fact, the Republicans in charge of the state have told these single polling stations to only remain open for the minimal hours legally required by law in order to suppress early voting, which, again, heavily favors Democratic candidates.

Same thing’s happening in Ohio. Same thing’s happening in Florida, if not for a court order forcing them to turn back these rules. This is happening everywhere. This election is being rigged, but it’s being rigged by the Republicans. They’re trying to take away your right to vote, just because of the people you vote for, just because of the color of your skin, just because of your age. This is discrimination at every possible level being carried out by Republican operatives. It doesn’t matter that Donald Trump is their candidate. They would be doing this if it was Ted Cruz, or Jeb Bush, or anyone else, because this is the same story we’ve seen play itself out for the last 16 years in this country. They don’t care who’s on the Republican side, they want to do everything they can to suppress that Democratic vote. That’s what they’re doing this time.

My advice to anyone out there living in these states, Ohio, Wisconsin, Florida, North Carolina, Texas, Pennsylvania, anywhere where voter suppression could take place, find the number, the telephone number, of election protection hotlines and keep it on your phone, ready to dial, when you go to that polling station. Whether it’s early voting, or on November 8th, you make sure that you have that phone number handy. You call it the second you experience any form of suppression, any form of intimidation, to make sure that we correct these problems as they come up, and prove to Republicans, that no matter what they do, they are not going to suppress Democratic voters.