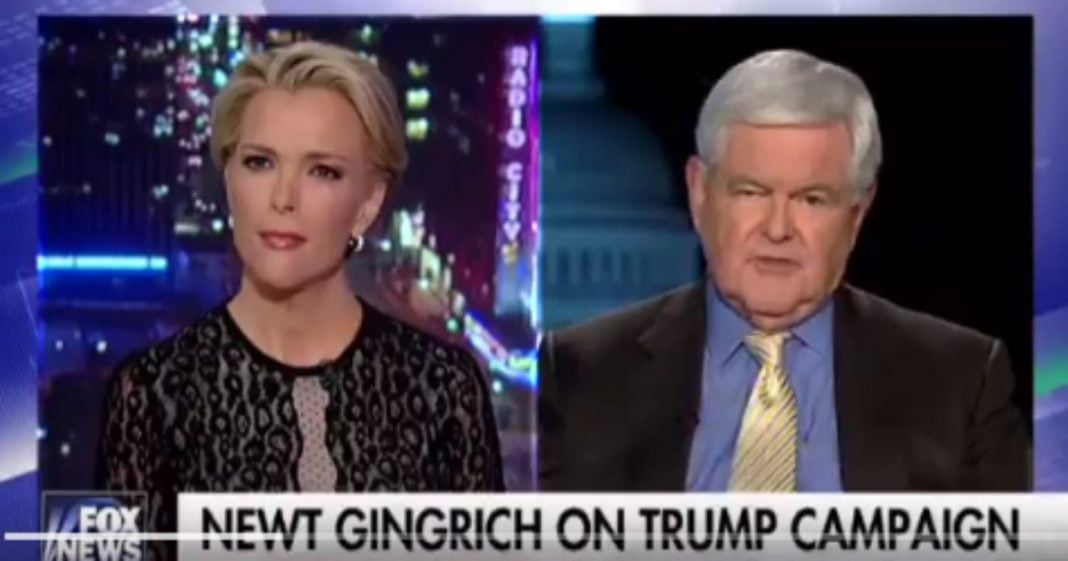 On Tuesday evening, Former Speaker of the House Newt Gingrich shilled shamelessly for Trump during an interview with The Kelly File where he said that she was “obsessed with sex.”

The outlandish comment came as Gingrich was accusing Megyn Kelly of focusing entirely on the sexual assault allegations against Trump while supposedly ignoring the latest Podesta File leaks.

“As a media story, we don’t get to say that the 10 women are lying. We have to cover that story, sir!”

“So, sure! It’s worth 23 minutes of the three networks to cover that story, and Hillary Clinton in a secret speech in Brazile to a bank who pays her $225,000, saying her dream is an open border, … that’s not worth covering?”

Kelly replied that her show had indeed covered that story, but Gingrich wasn’t willing to hear it.

“You wanna go back through the tapes of your show? You are fascinated with sex, and you don’t care about public policy.”

Gingrich really gave the perfect response there. By referring to sexual assault allegations as simply “sex,” he is making it clear that he neither respects nor understands issues of assault and consent. To Gingrich and other rich, white men, consent is a myth and if you are famous, you can “grab them by the pussy.”

I disagree with @megynkelly most of the time. But man, respect where it’s due for anyone who can drag a douche like Newt Gingrich this hard. pic.twitter.com/MJHjJNbifO