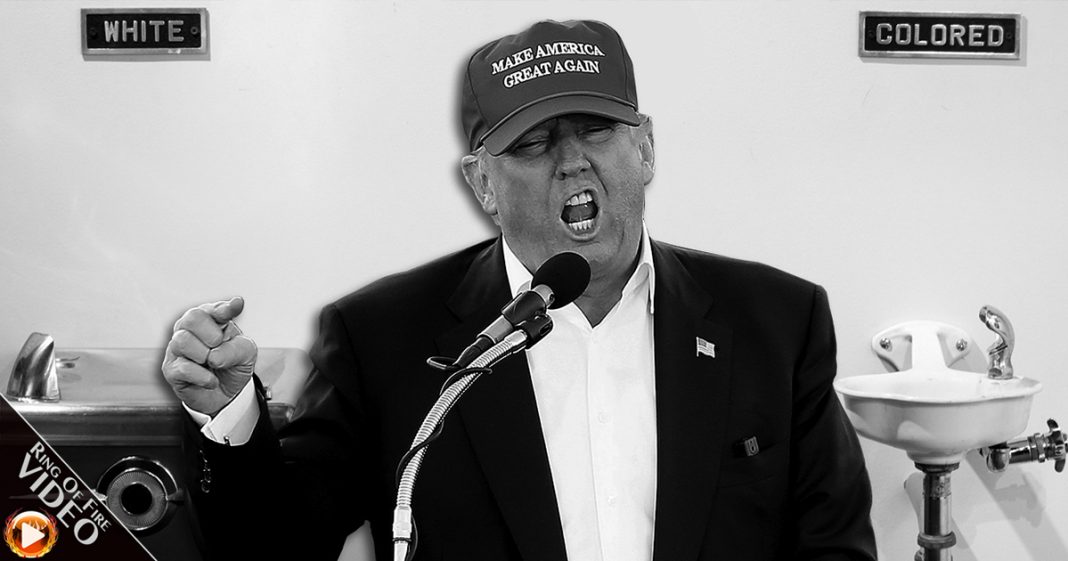 A new poll has found out what “Make America Great Again” actually means – it means Trump supporters are desperate to return to the days of McCarthyism and segregation. The Ring of Fire’s Farron Cousins discusses this.

If you’ve ever wondered how people could actually support someone as horrible as Donald Trump, take a look at the latest polls. According to the newest poll, 72% of Donald Trump’s supporters believe that since the 1950’s America’s kind of gone off track.

In the last 66 years, something has gone wrong. We’re not headed in the right direction. We need to go back to what we were 66 years ago according to the vast majority of Donald Trump’s supporters. What was it 66 years ago that made them so great?

Was it segregation? Was it McCarthyism? Was it treating homosexuality as a mental illness? Probably yes, all three. That is what Donald Trump supports believe, and don’t kid yourself, it’s actually the majority of republicans who believe this garbage, but when they say make America great again, that’s what they’re talking about. Let’s have separate water fountains, separate bathrooms for people who aren’t the same color as me. If somebody comes out as gay, say hey, that’s great. Here’s the mental institution where you’ll spend the rest of your life.

Why stop at the 1950’s? Why not take it back another 50 years? Let’s strip women of the right to vote. How’s that sound, Trump supporters? If we did that, your guy would definitely win the election. Let’s go back 50 years before that too and say, you know what? If you want to own another human being, hey that’s great. Make America great again, right?

Where does it stop with these people is the question? I guess even more importantly, how do we stop them? These are people who honestly believe these things and they do go out and vote. They own weapons capable of murdering hundreds of people in a matter of seconds. That’s dangerous. That’s scary. The rest of us shouldn’t have to live with that kind of fear because these people want to take us back to the 1950’s.

This is not okay. Again, it’s not just Donald Trump’s supports. This is what conservatives believe. They have always been anti-black, anti-Latino, anti-homosexual, anti-women. Donald Trump is just the culmination of that. Here we have the latest empirical evidence to prove those points.

It’s very sad, as an American citizen to look around and see where we are today. When you see that some other countries have made immense progress in the last 15 years on social issues, civil issues, medical issues, universal healthcare, universal college education.

Here we are debating whether women are intelligent enough to decide what to do with their own bodies. Here we are telling people which bathrooms you can and cannot use. We’ve passed laws just this year talking about that. Don’t pine for the days of the 1950’s. We’re still living them. Go to North Carolina if you don’t believe me. Go to North Dakota if you don’t believe me. It’s still the 1950’s in those states.

That is why this election really is so important. It’s not about electing Hillary, it’s about preventing Donald Trump, and that really is the most important thing that we can do right now.