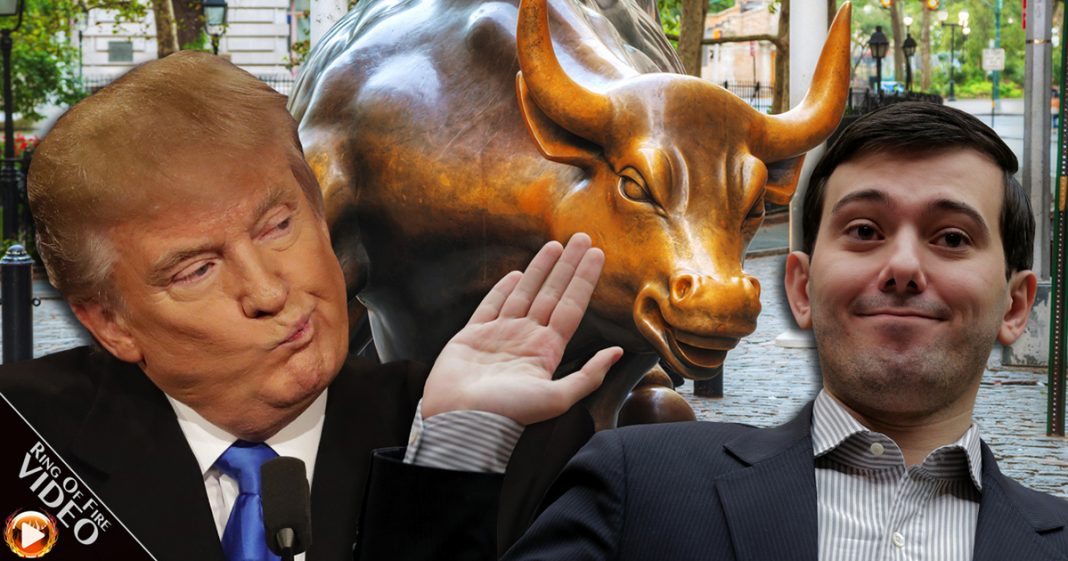 Americans are losing faith in capitalism, and the poster children for its demise are Donald Trump and Martin Shkreli. Their greed and corruption has highlighted the dysfunctional design of American capitalism, and people are no longer in the dark about what’s really happening in corporate America. The Ring of Fire’s Farron Cousins discusses this.

People like Donald Trump who have no problem not paying their contractors or paying their workers slave wages or people like Martin Shkreli who take a life-saving drug and jack up the price by a couple hundred percent. That is why the American public is losing faith in capitalism, specifically the millennial generation, who actually view socialism and communism on about the same level as capitalism, because it’s failed them. Capitalism, when working properly, is one of the greatest economic systems every developed, but when you have people like Martin Shkreli and Donald Trump running it, it doesn’t work. The job of a pharmaceutical company is to make as much money as possible, because that’s what capitalism says. That doesn’t work when you’re primary mission is to create life-saving medication, money shouldn’t factor in. When the federal government, which is US taxpayers, funds most of your research and development, you don’t get to up the price of the drug by hundreds of thousands of percent, that’s not okay, that’s not fair. You’re ripping people off and taking advantage of capitalistic loopholes. That’s what Shkreli and Trump have done.

It’s not just those two guys, it’s the fact that we’ve been shown that there all Trump and Shkreli’s out there. They don’t want to pay living wages. If they could get away with it, they wouldn’t pay wages. That’s why Trump ships his jobs overseas. He wants to pay the least amount possible to get the biggest return possible. Again, it’s because capitalism lets them. I do agree with Reich. Shkreli’s hearings on Capital Hill prove that the government doesn’t really work and that we shouldn’t trust them to do anything about it. It’s not a Republican or Democrat thing anymore either. Nobody’s doing anything, unless you count Bernie Sanders, Elizabeth Warren, Keith Ellison, a few others. I apologize for not remembering your name off the top of my head. Still, those handful of people can’t do it all. They can’t reign in all of the Martin Shkrelis or all of the Donald Trumps. There’s blame on both sides of Democrats and Republicans here, because they’re the ones who have allowed idiots like these to flourish, to become billionaires, simply by ripping people off. That is why people in the United States have lost their faith in capitalism. They don’t trust it, because it doesn’t work. They don’t trust it, because people like this take advantage of it. They don’t trust it, because it’s not helping them in any way.