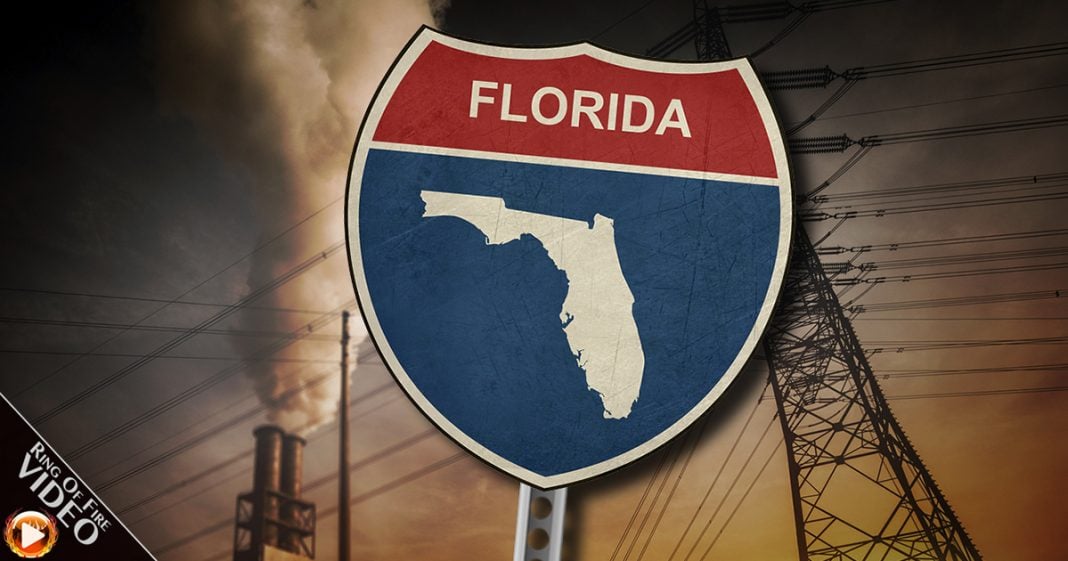 Florida voters will be voting on a poorly-worded amendment in a few weeks that would prevent the solar industry from being competitive in the state. And the big money funding this campaign is coming directly from the fossil fuel industry, including big money from the Koch Brothers. The Ring of Fire’s Farron Cousins discusses this.

In two weeks, voters in the state of Florida are going to head to the polls and they’re going to vote on whether or not to make it easier for the solar industry to generate power in the great state of Florida, which is also known as the Sunshine State, so it seems pretty logical. However, the wording of this particular amendment as it is on the ballot makes people think that they are voting in favor of increased solar choice when in fact, they’re voting against it, and this was by design. The companies that are involved in the lobbying and essentially the drafting of this amendment include Duke Energy, Koch Industries, Southern Gulf Power, TECO Energy, a whole host of energy companies, as ThinkProgress has pointed out in a handy little diagram.

These are the people who are pushing this amendment that is going to make it more difficult for Florida residents to get solar panels on their home and it could make it overall impossible for them to get leases and funding in order to generate solar electricity for their own homes. The voters in Florida don’t know this, and that’s what’s so dangerous. So far, sixty-six percent of people in the state of Florida support this amendment. They want it to pass. They want it because they believe it’s going to make solar energy more affordable and more readily available, when in fact, as I mentioned, as this amendment is worded, it would actually reduce the availability of solar in the state.

Now, for many years, Koch Industries has actually been leading the charge in the state of Florida to eliminate solar power in the Sunshine State. Rick Scott, the Republican governor, has been all too willing to help them out and block solar energy at every possible turn. Now, this is just one of many ballot initiatives on state ballots across the country this November. This one is particularly disgusting, not just because I’m a Florida resident, but because of the way that corporations have come in with their misinformation campaigns in an attempt to mislead and misdirect Florida voters.

The people in this state want solar energy. They want cheaper alternative clean energy, but Koch Industries, Exxon, Duke Energy, they’re not going to let them have it, so this amendment is going to pass and it’s going to make it almost impossible for Florida residents to generate solar electricity. Now, this is a state that is going to be hit harder by climate change than any other state in this country. The city of Miami, within a hundred years, scientists are predicting it could be completely underwater, gone forever, Miami. Here we are allowing a dirty energy industry to come in and make sure that that happens.

Politics today is getting sickening. The way that we’re letting corporations come in, that not just the federal government but now they’re meddling so deeply within the states. They’re going to make sure that whatever happens, they get as much money as possible and to hell with the consequences, to hell with those people whose homes are going to be underwater within the next hundred years or sooner, as scientists are now telling us that it’s not even going to be a hundred years. Maybe it’ll be seventy-five or fifty.