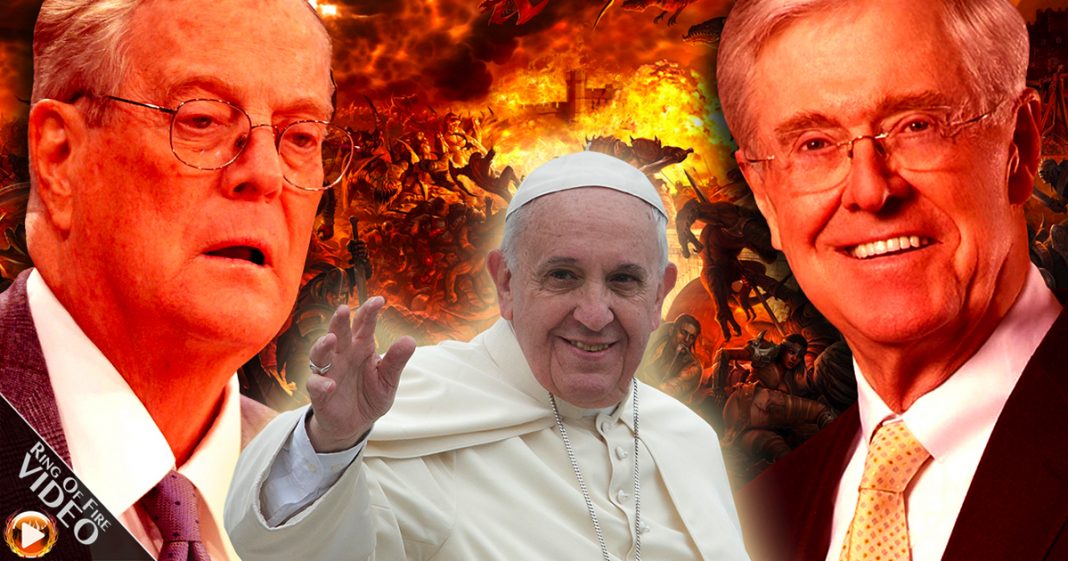 The Koch Brothers have never been shy about tackling political foes, but their latest target is one that should make us all question our morals. The new target is Pope Francis, and the Brothers want to take down his populist rhetoric and replace it with free-market talk. The Ring of Fire’s Farron Cousins discusses this.

That’s right. The Koch brothers have decided that the populism coming from Pope Francis is a little too much to stomach, so they’re going to try to circumvent the Pope, to get free market thinking back on the forefront of the Catholic Church. The Koch brothers are giving very generously to the Catholic University of America, hoping that they can convince this very large, very prestigious American university to teach free market thinking, rather than populist thinking. Teach them that the free market is the true will of God, not helping your neighbor. Teach them that the Ten Commandments really, really should’ve been eleven and included one that said, hey, also, let businesses do what they want to do, because that’s going to be better for everybody.

I say that because I was born and raised Catholic. I am what you would now call a lapsed Catholic. I haven’t been to church … I couldn’t even tell you the last time, but I do understand Catholicism. I do know what it means. I grew up in that, I went to Catholic schools, so I get it. To be honest, even though I haven’t been to church in a couple decades, I do take very strong offense to the Koch brothers going after Pope Francis and the teachings of the Catholic Church, because for one of the first times in my lifetime, we’re actually seeing some progress within the Catholic Church.

We finally have a pope that’s come out and said, listen, you have to take care of the poor. Stop pulling money in for your congregation and spending it on yourself. We’re spending it to build these lavish churches that are completely unnecessary. Take care of everyone else. Do what Bernie Sanders said to do. That’s the kind of message that every religion on this planet should be spreading, because that’s what all religions are pretty much based upon: helping others. Being a good person. Essentially, not being the Koch brothers. That’s what religion’s all about.

When you look at people like Charles and David Koch, religious is not a term that you would use to describe them. They go against every teaching of every modern religion possible. They believe that the only god in this world is money. Unfortunately, that’s a disease that seems to have infected a lot of the Republican Party, especially among the upper class.

The message that Pope Francis needs to continue to hammer out there is to take care of the lesser of society, those who can not take care of themselves, because that’s not a religious message, per se. That’s just a message on how to be a decent human being.