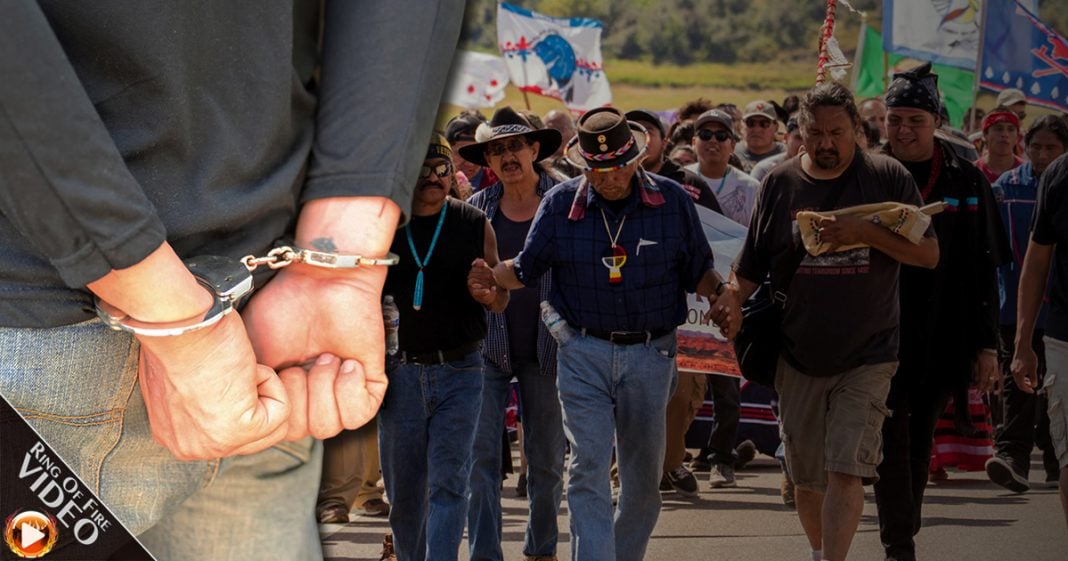 Over the weekend, 83 people were arrested while protesting the Dakota Access Pipeline construction, a move that shows an increasingly hostile attitude towards both protestors and journalists. The Ring of Fire’s Farron Cousins discusses this.

Protest are still taking place over the construction of the Dakota Access Pipeline. Over this past weekend 83 people were arrested by guards armed with pepper spray while protesting the construction of this pipeline. These were a combination of both protesters and journalist which when you think about it, is pretty much a complete violation of our First Amendment freedoms. We are arresting people for reporting on this pipeline. One reporter who was arrested is facing 45 years in prison for reporting, for doing her job, for doing something that is inaugurated under the First Amendment of the US Constitution.

Amy Goodman, another reporter had the charges against her dismissed after turning herself in last week, then of course this past weekend with 83 more people arrested. According to reports from Common Dreams, many protesters have been peppered sprayed, they’ve been slammed to the ground, forcibly arrested for being peaceful protesters. What we’re looking at here is a complete violation of every single right granted to American citizens and Native Americans that you can imagine. These people are out there fighting for clean water. They’re fighting for the preservation of sacred Native American lands and burial sites. They’re not out there trying to make a statement other than, stop allowing oil companies to screw over the entire country and put our drinking water in danger for their profits. That’s the message that they’re sending.

These arrest are not slowing them down, and that is one of the most admirable things I can possibly imagine in this situation. They see what’s happening, they see what’s taking place with everyone else and they’re not backing down. This is remarkable, this is unbelievable that this is taking place, but it is so respectful that these people are still standing up and still saying that, we’re going to continue to fight. People deserve clean drinking water and we’re not going to let Dakota Access company poison it with their oil. We have seen far too many pipeline spills in the US and Canada in the last few years to know that these pipelines are not safe. There’s virtually no monitoring, there’s no oversight, they put them in the ground and they leave. The Federal Government has done almost nothing to stop this.

Now, I will say, they have sent a request to the Dakota Access company saying, “Hey, could you please not construct this pipeline until after we do an Army Corps of Engineer environmental assessment on this, please maybe Dakota Access Company. We would really love to do that.” That’s not what the Federal Government does. The Federal Government can easily step in and say, “Hey, guess what? You’re not building this. Go away.” They can do that. They’re not, because they’re in the pockets of the oil industry. That’s exactly what this is about. That is why people are getting arrested. That is why they’re getting pepper sprayed and slammed to the ground, and that is why one woman is facing 45 years in prison. Because our Federal Government when it comes to standing up to the oil industry, is completely useless.