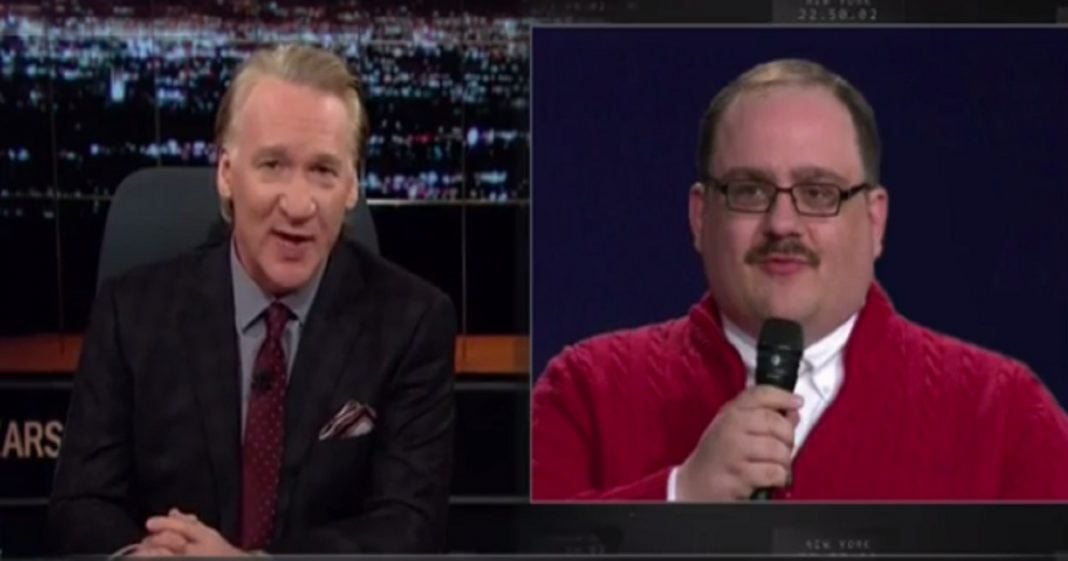 The internet has had a lot of fun with newly discovered sensation Ken Bone after last Monday’s presidential debate, but now that the bone-dust has settled (heh), some people aren’t as amused.

Speaking about the idiocy of still being undecided in the nation’s most decisive and divisive election probably ever, Maher expressed his frustration that the newly-minted meme could have ever been undecided at all.

While the bulk of Bone’s fame came from his supposed innocence and decency, Maher clearly saw him in another light.

“Why? Because after fifteen months of this campaign he’s still too stupid to pick Hillary over President Pussy Grabber? For me the great sadness of this election is knowing that even if Trump doesn’t become president, we live in a country where half the people think he should be.”

Like the handful of GOP’ers who still stand behind Trump, Bone is just as guilty as the rest who have not seen the deplorable, violent rhetoric of Trump and said “no way.”

“Now, I would really like to ask Mr. Ken Bone, or any undecided voter as these last fifteen months rolled along, there was no breaking point for you? Trump saying he would kill the children of terrorists with drone strikes, physically throwing out twelve million Mexicans, banning all Muslims, giving Saudi Arabians nukes, running a scam university, cheating veterans out of charity money, not paying taxes, picking Putin as his favorite leader, not being able to let go of a feud for a whole week with a beauty queen, the impressions of the handicapped? Nothing?”