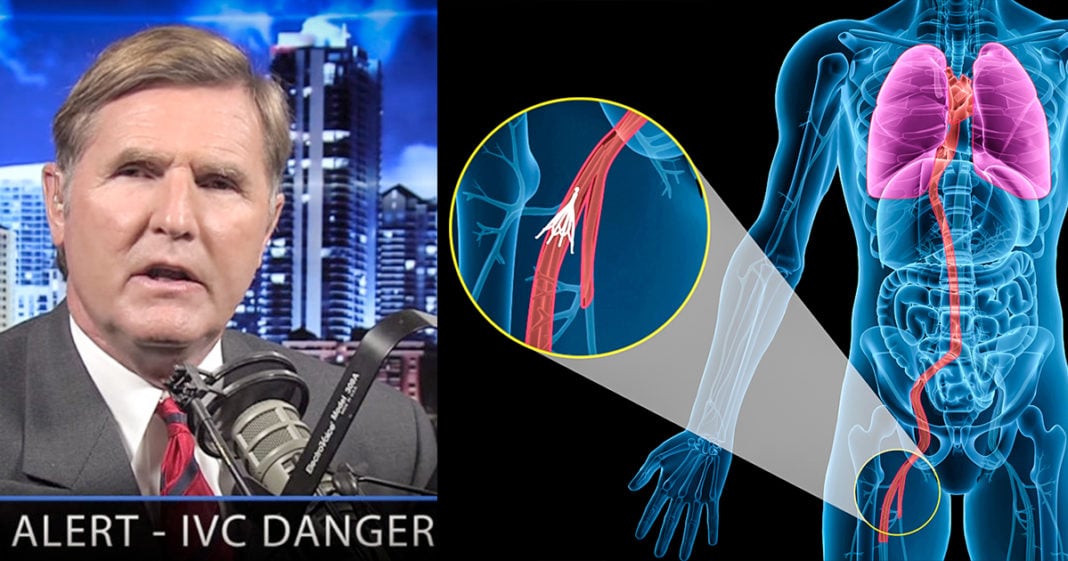 Ring of Fire’s Mike Papantonio discusses this, and what the company knew about their dangers, with attorney Jeff Gaddy.

Learn more about the dangers of IVC filters at DrugSafetyNews.com.

Mike:  The FDA has received hundreds of complaints about the intravenous filter designs to catch blood clots in the patients who can’t take blood-thinning medication. Recently, I talked with Attorney Jeff Gaddy about the dangers, serious dangers, about these filters and what the company knew about the dangers. Let’s take a look.

Mike:  Jeff, it looks like the FDA let another one get by. I don’t know how many times we’re going to have to do stories like this until the public starts announcing and understanding that the FDA has become completely dysfunctional. This IVC filter never should have happened. First of all, lay out for the viewers what is the IVC filter to begin with. What is this product we’re talking about?

Jeff:  Sure, Mike. The IVC filter is a medical device that’s intended to prevent pulmonary embolism. Essentially, it’s a device that looks kind of like a spider. It’s implanted in the inferior vena cava, which is the largest blood vessel in the body. This device is implanted just below the kidneys, in that vessel, and it’s intended to trap blood clots that may be traveling up that vein. The problem that we’re seeing with these IVC filters is that the manufacturers looked to get into the retrievable filter market and attempted to establish a niche. What they did was they took a permanent filter, which was a pretty decent product, and they weakened it.

Mike:  In other words, Jeff, this is a story we hear about time and time again. You have something that works. The marketers come in there and they say we can make more money by doing something different. They don’t have to do it, but they can make more money doing it. It may be a medical process where they can get paid for it. It may be selling another product that they don’t have to sell so they can get paid for it. Time and time again, you see the same type of things. What you’re describing here is before the IVC filter even came in existence, there was a system that worked where you didn’t have to replace anything. There was no risk of breakaway. There was no risk of migration. There was no risk of an anaphylactic immunology reaction. Why even have this product out there?

Jeff:  You hit on it already, Mike. It’s money. They had a permanent filter that was doing a good job of preventing pulmonary embolism in patients that were contraindicated for blood thinners. They went into the retrievable market, and in order to make the filter retrievable they had to weaken the filter. This is a device that’s put into a very dynamic part of the body. This is the largest blood vessel in the body, and there’s a lot going on there, a lot of blood rushing through. When they make these filters weaker so that they can be retrieved, they’re susceptible to a lot of these adverse events that we’re seeing, where you’re having legs of the filter break off, you’re having the entire filter migrate through the body, you’re having the legs of the filter perforate the blood vessel that it’s implanted in, and it’s leading to a lot of these adverse clinical outcomes.

Mike:  Here’s what always amazes me, Jeff. Here you are a hugely experienced trial lawyer, many, many trials under your belt. It’s almost like the company doesn’t understand that sometime somebody like you is going to be in a deposition asking these tough questions and they’re going to have to answer these tough questions. The way I see their attitude is they really don’t care. The question comes down to how many IVC filters can they sell, how much profit does that put in their pocket. After they do the computations, they figured out how many people did we kill, how much do I have to pay per person. The only case we hear about in that regard is the Ford Pinto case where they calculated we can kill X number of people and still make a profit on our exploding gas cans.

Jeff:   Mike, you’re absolutely right. These medical manufacturers love to say that they put the patients first, but when we get in there and start to look at the corporation documents and look at how they really act, we see that that’s not the case at all. In fact, NBC News did an investigation into C. R. Bard, one of the big manufacturers of IVC filters, and one of the things they found was back in 2002 when there were initially some deaths from these retrievable filters, the first thing that Bard did was not run and tell the physicians what was going on, not take the device off the market, but hire a PR firm to determine what their response needed to be when and if anybody found out what was happening from their devices. That’s the theme that I know you’ve seen over and over again with a lot of these big pharma-type companies, and we’re seeing it once again as it relates to the IVC filters.

Mike:  The first thing you do as a trial lawyer is you get all the documents. You don’t get them just from the company because most of the time the company destroys those documents. What you do is due diligence. You get them from other sources, you start reviewing them. What you’re already seeing with this case, Jeff, is it already lining up to where if this thing goes to trial the same story is going to be told, profits were put ahead of human health and that the marketers of the product were actually in charge rather than the scientists being in charge. Do you have a feel for that right now as you’re looking at this case?

Jeff:   It’s the same story that we’ve seen time and time again with the medical device industry. They have a product, it hurts people, and they want to pull the ostrich and put their head in the ground, they want to bury their head in the sand and pretend they don’t know what’s going on. Like we’ve seen over and over again in this industry, money talks and that’s what drives their practices, and that’s what drives what they do with these devices.

Mike:  Tell me about the involvement of the FDA here, Jeff.

Jeff:  Sure. Sure. The FDA has spoken out on two different occasions, once in 2010 and again in 2014, about retrievable filters in general. What they said both times is they’re seeing a large number of adverse events, and what they’re recommending to doctors is is, “Hey, if you have any patients with these filters in them, you need to get them out as soon as possible.” Even one study came out and said once they’re in for more than two months …

Mike:  They start biodegrading and then the cost to remove is ridiculous, isn’t it?

Jeff:    Right. Essentially, it’s more beneficial to the patient after two months to not have it in than to have it.

Jeff:   However, in the face of the FDA coming out and saying you need to get these things out as quickly as possible, the medical manufacturers continue to tell doctors that retrieval is optional.

Mike:  First of all, I think you would agree, it’s remarkable that the FDA would do anything because once a product is on the market, like an IVC filter or whatever it is, the FDA usually does nothing, they will simply allow it to happen. The very fact that the FDA is saying you better take some action is in and of itself like a big red flag, isn’t it?

Jeff:   Right. You’re absolutely right. I know you’ve been doing this for a long time and you see it time and again, that the FDA is often one of the last ones to recognize and announce that there is a problem and it’s up to the civil justice system to really keep these big companies in line. You’re absolutely right. The fact that the FDA has come out and said anything at all should be a big red flag that we have a product with a serious issue attached.

Mike:  You’re handling a lot of these cases. What do you tell these people that come in and say, “I’ve got this in my body. What in the world do I do about it?”

Jeff:   It’s scary because really they don’t just have a filter in their body, they have a ticketing time bomb. We certainly recommend that they consult with their physician, they get it checked out to determine whether or not the filter can be removed safely, and if so it’s not something that you want in your body any longer than it has to be.

When they talk to their doctor, very often the doctor is going to push back because he or she’s getting the wrong information from the manufacturer. My recommendation is be persistent, get it out. There’s not even a close call here. When you see your doctor about it, you need to be adamant. Go in their armed with the facts, and when they try to push back and say don’t worry about this do not stop there.

Mike:  Jeff Gaddy, thank you for joining us. Good luck on this case. I know they’ve got a big problem with you working on it. Appreciate you joining me.

Learn more about the dangers of IVC filters at DrugSafetyNews.com.