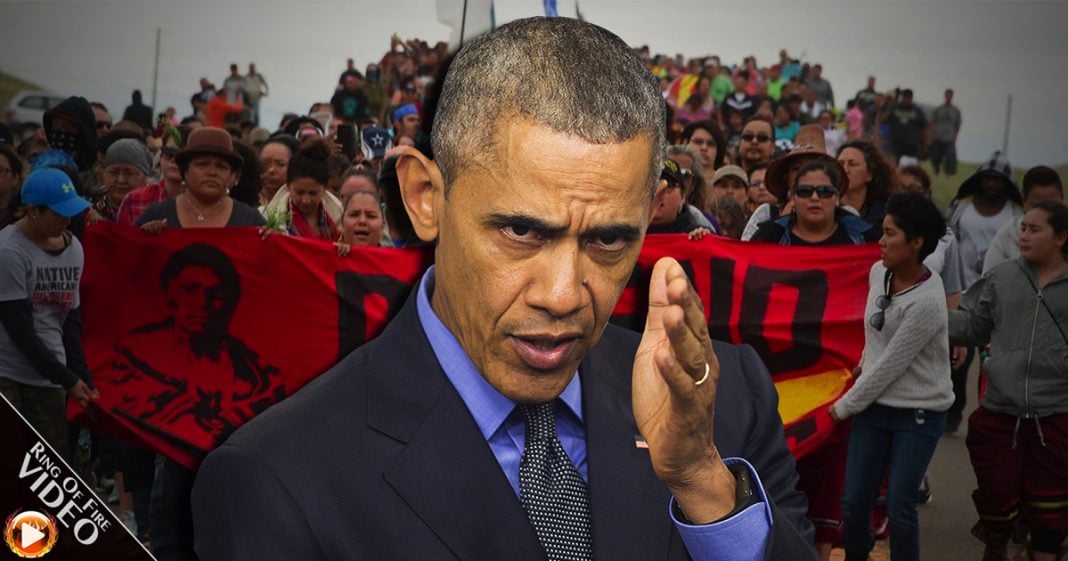 Bernie Sanders sent a letter to President Obama (along with 4 other Democratic senators) begging him to halt construction of the Dakota Access Pipeline. Obama isn’t listening, Hillary is staying silent, and the one man that could have made a difference in the U.S. is still fighting for the health and rights of the American public. Face it, Democrats, you made the wrong choice this year. The Ring of Fire’s Farron Cousins discusses this.

The struggles over the construction of the Dakota Access Pipeline are not going away any time soon no matter how much the National Guard and the Dakota Access Company wishes they would. This week, we have seen the National Guard rolled out and up armored Humvees, assault rifles in hand, arresting peaceful protesters. These people were not violent, they were not destructive. They were peacefully protesting the construction of this disaster of a pipeline. My question is, where is the leadership on this issue? On Thursday, Bernie Sanders and 4 other democratic senators sent a letter to the president begging him to do something about this, halt the project until there are further environmental and cultural reviews of the proposed pipeline route. President Obama has been far too silent on this. He has not been a leader. For God’s sake, he hasn’t even been a decent human being on this issue. A couple years ago, he promised us that this Dakota Access Pipeline would never happen. Where is he now? He’s out campaigning for Hillary Clinton. Bernie Sanders and the other democratic senators, 4 of them who signed onto this letter, are the only ones showing any leadership.

Why isn’t Hillary Clinton talking about this? She has avoided the issue at every possible step. Where does Donald Trump stand on this? Well hell, he invested in the company that’s trying to build the pipeline. Why is it that Bernie Sanders is the only one who understands that you still have to do your job even when there’s an election. Why doesn’t Hillary Clinton understand this, that clearly people don’t want this pipeline built? Why can’t she take a position on it? Why can’t she get out there and at least acknowledge that it’s even a thing? But most importantly, where the hell is Barrack Obama? He needs to get up that podium today and take a stand, be a leader. I don’t give a crap if you are out there trying to win democrats the White House in 2016. That doesn’t matter to me at all. You still have a job to do for the next couple months, so why don’t you get out there and do it?

Bernie Sanders understands that. Hillary Clinton doesn’t, Donald Trump doesn’t, Barrack Obama doesn’t, but you know what, the world keeps on spinning even when we’re in an election cycle. There are still major issues at home that have to be addressed every single day, and I am tired of the corporate media acting like the only thing in the world happening right now is the stupid presidential election. That right now doesn’t matter. Peaceful protesters who are trying to protect cultural land and protect the drinking water for hundreds of thousands, if not millions of Americans, are getting rounded up and thrown in jail for exercising their first amendment rights, and Obama’s not doing anything and Hillary’s not doing anything. The one person who is doing something is the person who should have been at the top of the democratic ticket this year. This is one of those instances that absolutely proves that.

Bernie Sanders is the leader that this country needed, but obviously we didn’t deserve it. We don’t deserve that kind of dedication to the public. Instead, we get Hillary Clinton, loyal to corporations, loyal to her buddies that she’s going to put in power, doesn’t give a damn about what’s happening out there in the Dakotas. Does not care, and if you think she does, just provide me some evidence, okay? Show me something that shows she’s taken a stand in standing with these people. You can’t, but you go ahead and attack anyway, oh you can’t say Hillary Clinton doesn’t. Prove that she does. Don’t yell at us. Prove it. Provide sources, links, facts, figures, statistics, pictures, whatever you got, but you don’t have those because she hasn’t taken a stand.

She hasn’t been a leader, and neither has Barrack Obama on this issue. It’s okay to be pissed off at this. We should be. We should be pissed off that we had a great presidential candidate who didn’t win, but he’s still out there fighting for us. He’s not holding any grudges. He still believes in what he believed in 1 year ago, 5 years ago, 20 years ago, and he’s still out there fighting for it and probably will be until the day he dies. We can’t say the same about Barrack Obama and Hillary Clinton. Let’s face it folks, we made the wrong choice.