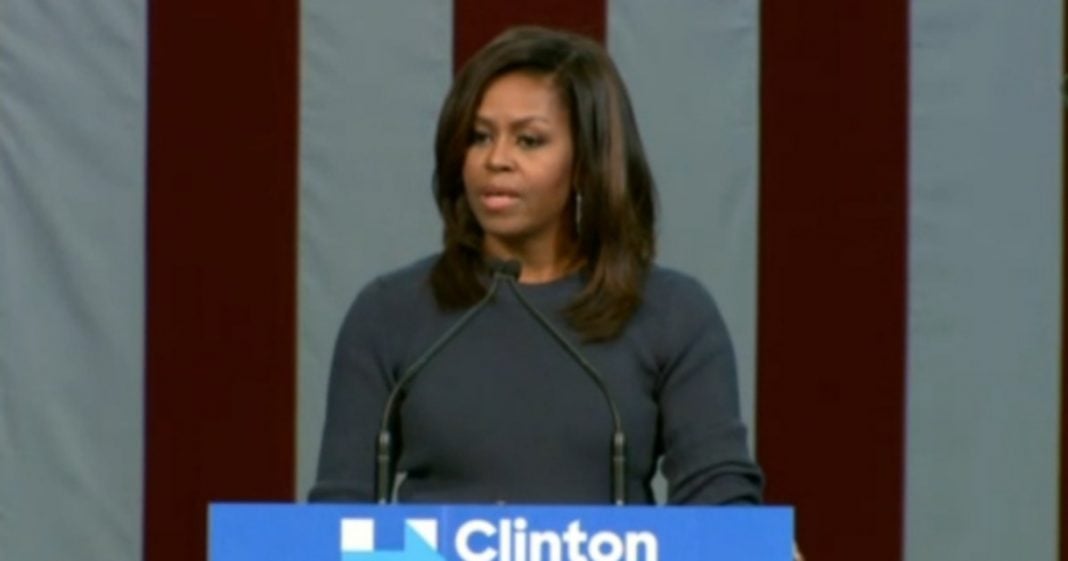 Becoming emotional at times, even seeming close to tears, the first lady shared that Trump’s comments truly bothered her deeply.

“I can’t stop thinking about this. It has shaken me to my core.”

Mrs. Obama explained that in the days since Trump’s hot mic audio was released, she found herself thinking hard about what his comments meant to women everywhere.

The first lady described a situation that so many women in America are all too familiar with – the sexual harassment that becomes so commonplace it almost feels normal. The overwhelming pressure to keep ones pain to oneself lest one be accused of being “dramatic” or a liar.

Michelle reflected that while so many people are pretending that this is just another layer of political hatred,

“This is not normal. This is not ‘politics-as-usual.’ This is disgraceful; it is intolerable.”

And so what should we do? The first lady said that we cannot continue to allow behavior like Trumps to be swept under the rug. We can’t show the children of this nation that remarks like those are acceptable.

“What messages are our little girls hearing about what they should look like, how they should act? Not for another minute – and let alone another four years. And now is the time for all of us to stand up and say ‘enough is enough.'”

If you are a woman, or if you love women in your life, this video of Michelle Obama’s unshakably strong speech is required viewing.

Michelle Obama blasts Trump’s “shocking”, “shameful” comments that have “shaken me to my core” https://t.co/WgFJoIwjLh pic.twitter.com/o2gxdZSV7u