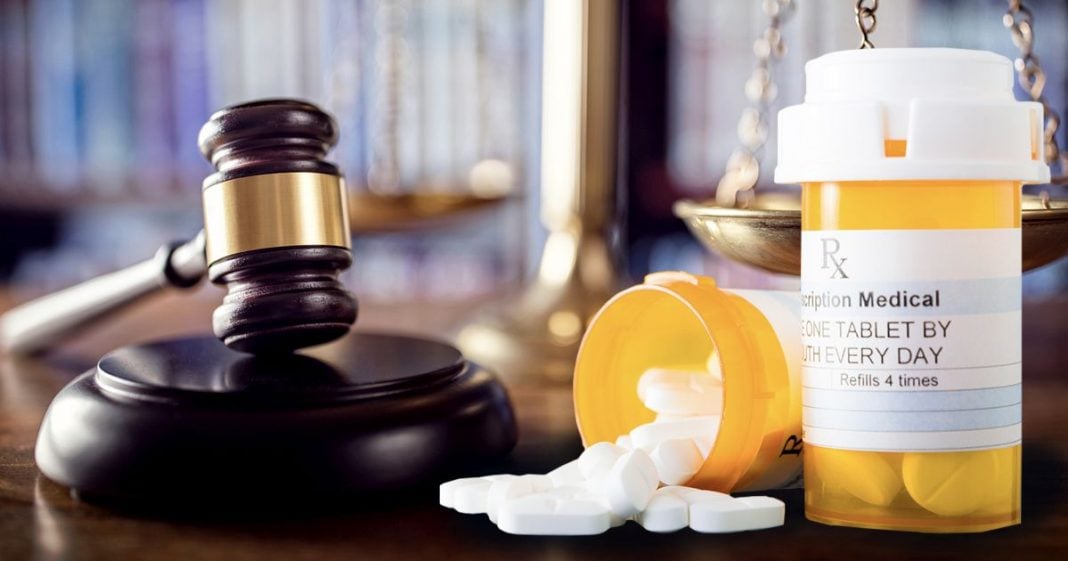 A lawsuit has been filed against drug manufacturers over opioid painkillers and it may wind up being the biggest litigation of its kind since Big Tobacco.

Since 1999, death caused by the abuse of drugs like Vicodin, Oxycontin and other prescription opioids have numbered over half a million – and lawmakers are doing little to nothing to address the problem while pharmaceutical industry lobbyists have been busy on Capitol Hill. Now, the courts are seeking to hold Big Pharma accountable.

On the law enforcement front, the DEA is imposing strict limits on the production of prescription opioids. Meanwhile on the judicial front, a lawsuit has been filed against drug manufacturers. The lawsuit has been brought by the Mississippi State Attorney General James Hood. He and a number of private litigation firms have alleged that drug makers have aggressively and fraudulently marketed opioid painkillers for off-label purposes in violation of Mississippi’s Medicaid Fraud Control Act and other laws.

What is unusual about this case is that the Attorney General – a public servant – has called in assistance from private attorneys. The participating firms have entered into agreements giving them a sizable percentage of any awards or recovery.

This partnership between a public officer of the court and private law firms has raised a few eyebrows. The Office of Attorney General in Mississippi is an elected one; therefore, whoever occupies that office is accountable to the voters. On the other hand, private litigation firms are generally motivated more by contingency fees than the public interest. Furthermore, this is a job for regulators, not the judiciary. The judiciary’s function is to interpret the law, not create it.

Nonetheless, lawmakers in Congress and state legislatures are too beholden to the very industries they are supposed to be regulating, while they ignore the public interest. At this point, there is little choice if Big Pharma is ever to be held accountable for the deaths of hundreds of thousands of people. It is worth mentioning that, should this action be allowed to proceed, it would force Big Pharma to face the actual communities and the real people who have been affected, rather than a bureaucracy over which they wield influence.

Big Pharma is fighting back, of course. Currently, the matter is before a state judge in Jackson who will determine if the case should even go forward. Defense counsel argues that “primary jurisdiction” over the matter rests with the federal Food and Drug Administration, not the courts.

Aside from the fact that the FDA has also been in Big Pharma’s back pocket, courts around the country are divided on this issue. On one hand, a California judge dismissed a similar case in that state on those very grounds – that it was the FDA’s job to regulate drug makers. On the other hand, a federal judge in Chicago is allowing another opioid lawsuit filed by the Windy City to proceed.

If the Mississippi judge allows this lawsuit to go forward, it could become litigation as big as that against the tobacco industry or asbestos manufacturers – and it could finally force society to face up to the fact that the serious battle is not against small-time users and street dealers of cocaine and heroin. It’s against a “legitimate” industry that for too long has put profits over human life and safety.