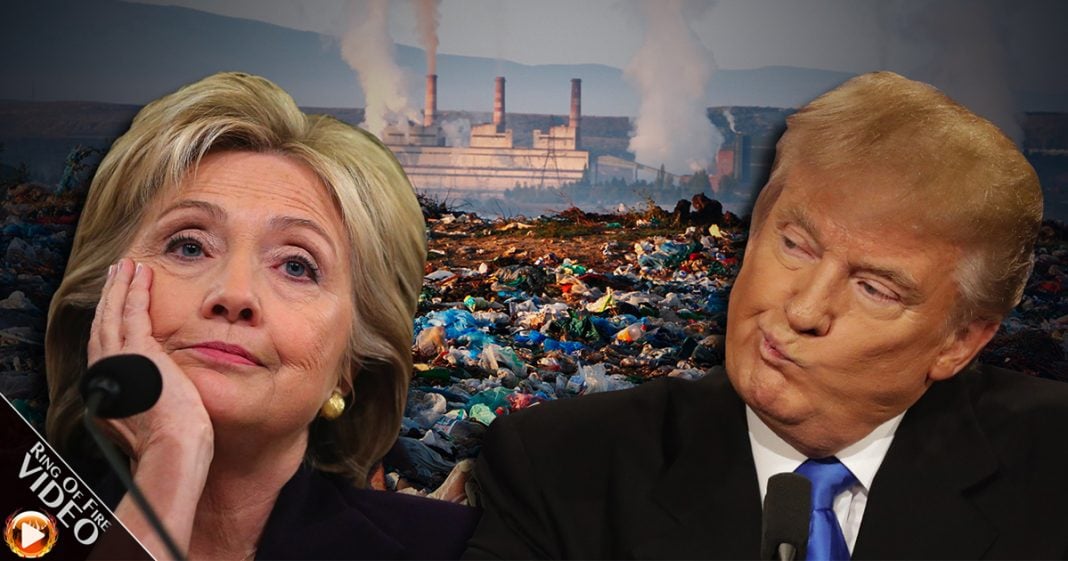 There were 2 mentions of climate change during the first two presidential debates combined. That’s bad news for the environment, and even worse news for the future of the planet. The Ring of Fire’s Farron Cousins discusses this.

Well, two US presidential debates are in the can, we got one more coming up next week and let me tell you something that will probably not be discussed in this next debate, climate change. During the first two presidential debates, there were two mentions of climate change. One was only used to attack Donald Trump, when Hillary Clinton said, “You think climate is a hoax by the Chinese.” That is as far as that discussion went. In the second debate, Hillary Clinton while discussing climate change also said, “Hey, fossil fuel, natural gas is a bridge fuel, that’s what we’ve got to do to get us over to renewable energy.”

Not exactly the kind of climate talk that we need for this country. Donald Trump on the other hand said we are going to open everything. We are going to be running on oil cylinders, coal, oil, offshore drilling, fracking, just do it all as much as you can, to hell with the environment. Now, Trump does not believe in climate change. Hillary Clinton says that she does. Does she? I don’t know, I’m not in her head. Her policies certainly don’t seem to indicate that she thinks it’s a pressing issue.

We have one candidate that doesn’t believe it even exists and one candidate who says she believes it exists but wants to do basically nothing about it. When Kenneth Bone asked that question in the second debate about how are you going to help with America’s energy dependence, climate change, and protect jobs? Let me tell you, Hillary Clinton had the answer to that last year. She proposed a policy that was so bold that it would have seriously put a dent in the amount of carbon emissions coming out of the United States.

She was going to spend $30 billion, yes that’s a heft sum, she was going to spend $30 billion to retrain coal miners and coal industry workers to work in the renewable energy industry. That satisfies all the criteria of Ken Bone’s question there. You address climate change, you still provide ample energy, and you don’t lose any jobs because you relocate those workers to another industry. That was Hillary a year a go but then during a meeting when pressed by a coal miner, she backed off that plan. She said she is not going to do it.

Now that would have been the boldest step that the United States has ever taken to address climate change and she backed off of it because one person asked her a question. That’s weakness. That’s the weakness that United States cannot have in addressing an issue as important as climate change. We will not hear any substantive talk about addressing climate change from either of these candidates. Now if Trump wins the presidency, obviously things are going to be much, much, much worse for the planet.

If Hillary Clinton wins, nothing changes. We are not going to see a reduction in emissions. We are not going to see a renewed focus to put us into renewable energy. It’s going to be business as usual. This planet can’t afford that. The United States can’t afford that but that’s what we are left with here. The two major party candidates that do not care about climate change. I don’t care what you say and you can say that Hillary Clinton believes in it, she will do something.

Well, bull, if she does something, I will give her credit for it. Based on every piece of available evidence from her time as a senator and her time as Secretary of State working with TransCanada to pass the keystone XL pipeline, there is nothing in her record that indicates that she will be serious about climate change. She had one good policy and she back off it because one guy asked her about it. That’s weakness that this planet can’t afford.